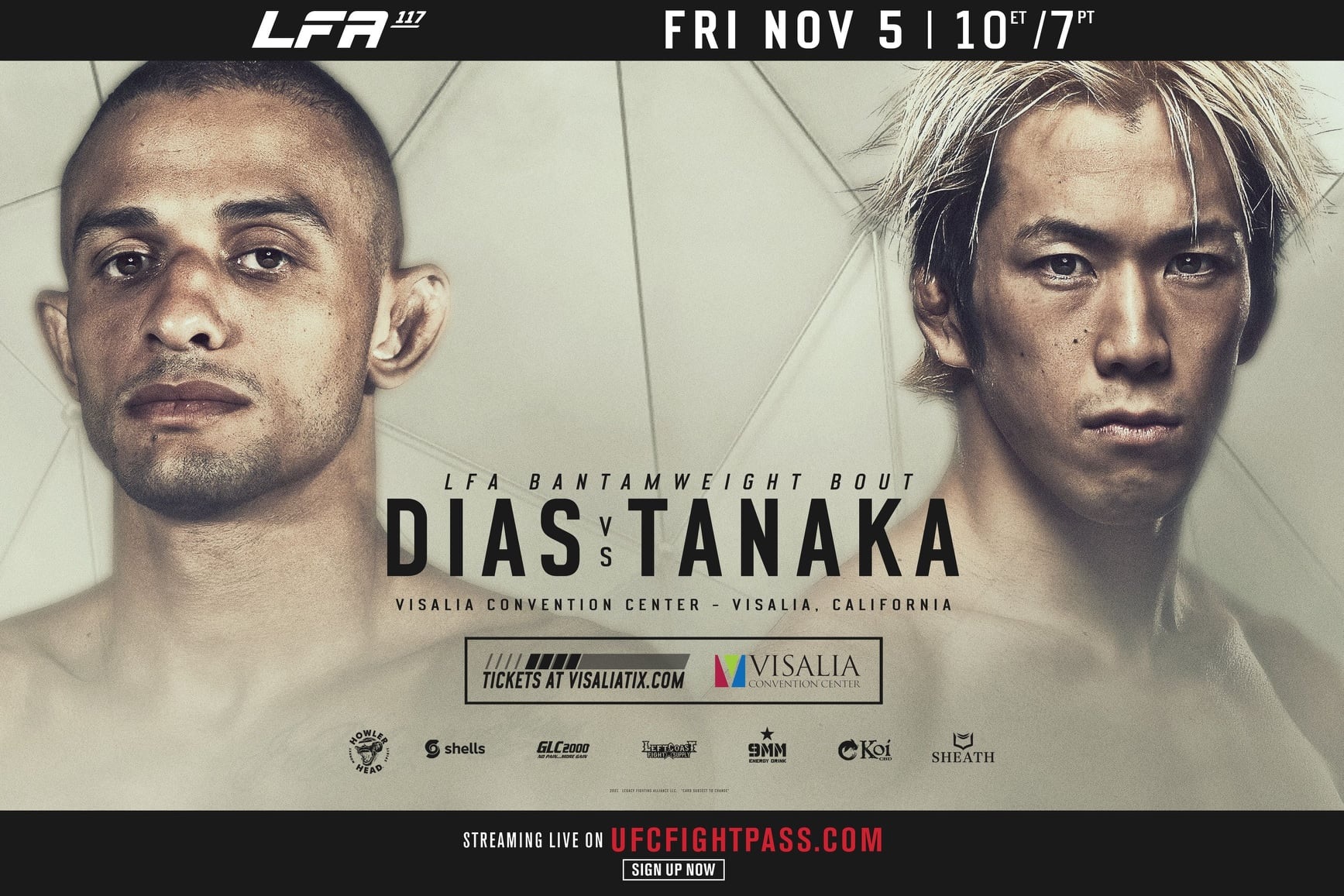 LAS VEGAS, Nevada — LFA CEO Ed Soares announced today that the promotion will return to California in November. LFA 117 will feature a high-stakes bantamweight showdown between two of the division’s top international stars when the promotion returns to the Golden State. LFA 117 will be the tenth LFA event to take place in the state.

Tickets are on sale now at VISALIATIX.com.

“We are excited to bring the LFA back to the Central Valley of California,” stated Soares. “Brazil’s Ricardo Dias and Japan’s Michinori Tanaka are two of our biggest international stars and will meet in the main event. Dias is coming off a ‘Knockout of the Year’ level performance, while Tanaka is excited to return to the global stage. The world will be watching when they meet in the main event of LFA 117.”

Dias (10-4) is one of the hottest prospects in the sport after shining in his first two fights for the LFA. The dynamic Brazilian is a native of Niterói, which is known as “Cidade Sorriso” (Smile City) and Dias has been all smiles since signing with the LFA in 2020. In his promotional debut at LFA 89, he upset top Hawaiian prospect Desmond Torres with a hard-fought Split Decision victory. The 30-year-old Kings MMA product would then return at LFA 107 this past May against M-1 veteran George Garcia. Dias would play spoiler once again, when he recorded one of the most devastating knockout victories of 2021. Dias landed a perfectly timed flying knee that leveled his opponent before becoming a viral highlight on the Internet. He is now eager to headline his first LFA event at LFA 117.

Tanaka (13-3) is one of the most revered fighters in Japan, which is the birthplace of several martial arts and home to one of the most MMA-savvy fanbases in the world. The world-class Japanese fighter is a native of Yokohama, which has been the host city to many legendary MMA events for PRIDE FC as well as the K-1 World Grand Prix Final in 2008. This made the transition to MMA a natural move for the young judoka when he made his MMA debut for Shooto in 2010. In fact, Tanaka won his first five fights for Shooto, where he won the 2011 rookie 132-pound tournament. After compiling a perfect 10-0 record, Tanaka signed with the UFC where he fought five times. Tanaka has since earned two victories in Japan and the 30-year-old is ready to return to the world stage at LFA 117.

About VISALIA CONVENTION CENTER:
The Visalia Convention Center offers more than 114,000 square feet of beautiful convention space, offering the best options for event planners of all backgrounds including a convenient location with diverse activities, affordable rates, and extraordinary personal service. In October 2020, the Visalia Convention Center announced that it was awarded the Global Biorisk Advisory Council(R) (GBAC) Star accreditation, the gold standard for prepared facilities. This announcement made the Visalia Convention Center the first convention center in the Central Valley of California to be industry-accredited in outbreak and infectious disease preparation and response. Visit visalia.city/depts/convention_center for more information.