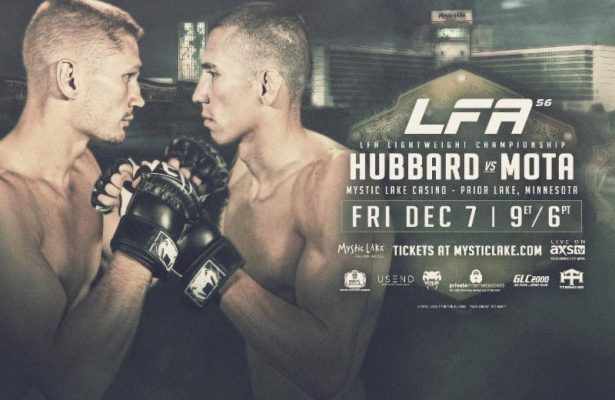 LAS VEGAS, Nevada – LFA CEO Ed Soares announced today that the promotion will celebrate its year-end event in Minnesota by crowning a new lightweight champion at LFA 56. This event will conclude a stellar 2018 for LFA, which consisted of 27 events that took place cost-to-coast, across all four contiguous U.S. time zones, and were televised live and nationwide on AXS TV.
The main event of LFA 56 will feature a lightweight title fight when Midwest powerhouse Austin Hubbard faces top undefeated Brazilian prospect Killys Mota for the vacant strap. LFA 56 – Hubbard vs. Mota takes place Friday, December 7th at the new Mystic Lake Center in Prior Lake, Minnesota. The entire main card will be televised live and nationwide on AXS TV at 9 p.m. ET / 6 p.m. PT.
“I am excited to bring our year-end event at the world-class Mystic Lake Center in Minnesota”, stated Soares. “LFA has enjoyed two incredible years since the merger of RFA and Legacy created our promotion. LFA 56 will punctuate year number two in style. It will be the fourth nationally televised MMA event to take place inside Mystic Lake’s new world-class facility in 2018. Mystic Lake has been a wonderful partner and it will now host the LFA lightweight world title fight between Austin Hubbard and Killys Mota on December 7th.”
Tickets for LFA 56 – Hubbard vs. Mota are available for purchase NOW at MysticLake.com.
Hubbard (9-2) returns to the LFA Octagon fresh off the most impressive win of his career. That win took place in his LFA debut in May against fellow top prospect Harvey Park. The fight took place at LFA 39 in Vail, Colorado. The resort town is over 8,000 feet above sea level and the event broke AXS TV’s record for the highest elevated event in network history. The 26-year-old Illinois native, that currently trains at Elevation Fight Team in Denver, was able to withstand the thin air and won a war of attrition against the talented New Mexico based Sheriff’s Deputy, who was riding a 7-fight win streak. Hubbard earned a shot at the vacant title with that gritty performance and will now travel back home to the Midwest with his sights set on becoming LFA’s second lightweight champion.
Mota (11-0) will get his LFA title shot after doing what every fighter dreams of achieving after their first 11 pro fights. That would be attaining a perfect 11-0 record. During the course of that streak, Mota famously knocked out UFC and PRIDE legend Akihiro Gono in his native Brazil. However, it was his most recent win that was his most important win. That came in his LFA debut in June against fellow top prospect Bobby Lee. The 27-year-old Glover Teixeira protégé stopped Lee just 21-seconds into the second round of their fight at LFA 41. The win came via Guillotine Choke after Mota battered Lee with his impressive Muay Thai arsenal. The win also came four weeks after Hubbard’s LFA debut win. Now their paths will finally meet at LFA 56 with the LFA lightweight title on the line.
Currently Announced Main Card (Televised on AXS TV at 9 p.m. ET / 6 p.m. PT):
Main Event | Lightweight Title Bout (155 lb)
– Austin Hubbard (9-2) vs. Killys Mota (11-0)

In 2017, RFA and Legacy FC merged to form LFA, the premier developmental organization in Mixed Martial Arts. The combined forces of LFA have launched the careers of over 150 athletes that have reached the pinnacle of MMA by competing in the UFC. In May 2018, the promotion joined the London Trust Media Holdings group of companies.
LFA 56 will be the ninth LFA event to take place in the state of Minnesota. RFA and Legacy FC hosted a combined nine events in the “Land of 10,000 Lakes” before the merger. Six of those events took place under the RFA banner inside the Mystic Lake Casino Hotel. The entire main card of LFA 56 will be televised live and nationwide on AXS TV at 9 p.m. ET / 6 p.m. PT.
Please visit LFAfighting.com for bout updates and information. LFA is on Facebook at Legacy Fighting Alliance. LFA is also on Instagram at @LFAfighting and Twitter at @LFAfighting.
About LFA:
LFA is a professional Mixed Martial Arts promotion that gives rising stars and top contenders the opportunity to prove their talent to fans and leaders in the industry. LFA was formed by the powerhouse merger between RFA and Legacy FC. LFA presents live Mixed Martial Arts events on a monthly basis around the United States including Las Vegas, Los Angeles, Denver, Dallas, and Houston. LFA can be seen live in over 53 million homes nationally through its television deal with AXS TV. Based in Las Vegas, NV, LFA is one of the most active and respected MMA organizations in the fastest growing sport in the world. (The Octagon, Ultimate Fighting Championship®, UFC®, and the eight-sided competition mat and cage design are registered trademarks owned exclusively by Zuffa, LLC. All rights reserved).
About AXS TV FIGHTS:
AXS TV FIGHTS presents more LIVE mixed martial arts and kickboxing events than any other television network every Friday night at 9pE/6pP. Events taking place on the west coast will be televised at 10pE/7pP. UFC Hall of Famer Pat Miletich, and veteran broadcaster Ron Kruck call all the action and Phoenix Carnevale reports from cageside as champions, challengers, and top prospects take center stage. AXS TV Fights can be found online, on Facebook, and on Twitter. AXS TV is widely distributed in the U.S. via AT&T U-verse, Charter, Comcast/Xfinity, DIRECTV, DISH, Sling TV, Suddenlink, Verizon FiOS, and other cable, satellite, telco and streaming providers. The network is also carried in Canada, Mexico, and the Caribbean.
About London Trust Media:
London Trust Media is a diversified business focused on the Internet and media industries – bringing the Internet back to its original state and bringing power back to the people. London Trust Media runs the leading no-log VPN service provider in the world Private Internet Access (PIA) as well as Kore Asian Media, Linux Journal, freenode, Snoonet, JOG, BlockExplorer, and Provocateur. Please visit their website at www.londontrustmedia.com for more information.
About MYSTIC LAKE CASINO HOTEL:
Mystic Lake Casino Hotel, the premier gaming facility in the Midwest, continually creates new, fun and exciting entertainment experiences for its guests. Mystic Lake® offers gaming, three lively bars, exceptional dining at seven restaurants, headline performers, unique special events and luxurious accommodations. Located 25 minutes southwest of Minneapolis / St. Paul in Prior Lake.