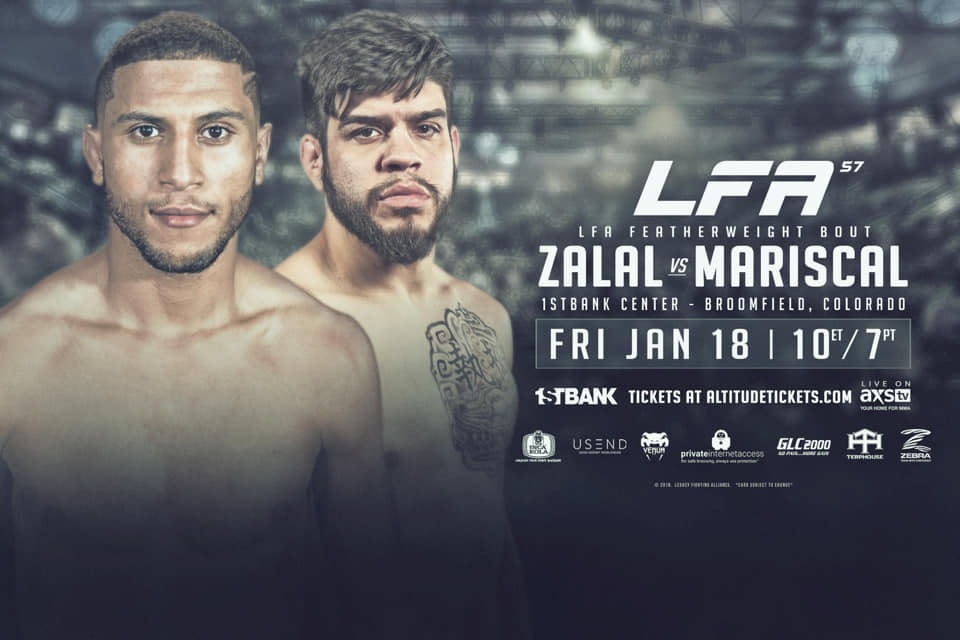 LFA kicks off 2019 in Colorado with a Featherweight Showdown at LFA 57 – Zalal vs. Mariscal

LFA KICKS OFF 2019 IN COLORADO
WITH A
FEATHERWEIGHT SHOWDOWN
LFA 57 – ZALAL vs. MARISCAL

LAS VEGAS, Nevada — LFA CEO Ed Soares announced today that the promotion will kick off 2019 with a high-stakes featherweight showdown when the promotion returns to Colorado in January.

“I am happy to announce that LFA will kick off 2019 in Colorado,” stated Soares. “LFA 57 will be our fifth trip to the state and we look forward to adding to our exciting history in the Rockies with an explosive main event. Youssef Zalal and Jose Mariscal are two of the most exciting featherweight prospects in the world. They also happen to train locally at two of the best gyms in the sport. We will find out who the next big thing in the featherweight division is on January 18th.”

Tickets for LFA 57 – Zalal vs. Mariscal are available for purchase on Friday, December 14th at 10 a.m. MT through AltitudeTickets.com.

Zalal (6-0) returns to the LFA Octagon for a fourth time looking to do what he has done in every fight of his career. The Morocco native holds a perfect 6-0 record with 6 finishes. “The Moroccan Devil” has been clinical, creative, and violent. That paired with his technical understanding and youth have him pegged by many MMA pundits as a surefire rising star in the sport. The 22-year-old Factory X Muay Thai product began kickboxing as a child in Morocco, but has spent the second half of his life learning the ins and outs of MMA in the United States. That has helped make him one of coach Marc Montoya’s most trusted cornermen for a team that regularly competes at the highest level of the sport. Now it is Zalal’s time to shine and the spotlight will be bright when he looks to follow in the footsteps of his teammates Ian Heinisch, Anthony Smith, Brian Camozzi, and James Krause. They all won LFA or RFA main events before signing with the UFC.

Mariscal (8-3) is a Chicago native that has been pegged for greatness before he ever competed in a professional MMA fight. “Chepe”, now 26, began competing in amateur MMA at 20-years-old. Since then, he has compiled a combat sports résumé that will make most heads turn. IMMAF world champion, IMMAF national champion, 18-1 amateur MMA record with 17 finishes, two-time regional MMA champion as a professional fighter, nine-time BJJ champion, three-time kickboxing champion, NJCAA national qualifier in wrestling, and then to add a cherry on top, he holds the rank of black belt in Judo. Mariscal eventually moved to Colorado to join the prestigious Elevation Fight Team, where he became one of current UFC bantamweight champion T.J. Dillashaw’s main training partners. All of these achievements have now led Mariscal to this defining moment in his career. The high-stakes LFA 57 main event on January 18th.

LFA 57 will be the fifth LFA event to take place in the state of Colorado. RFA visited “The Centennial State” eight times before the merger. The entire main card of LFA 57 will be televised live and nationwide on AXS TV at 10 p.m. ET / 7 p.m. PT.