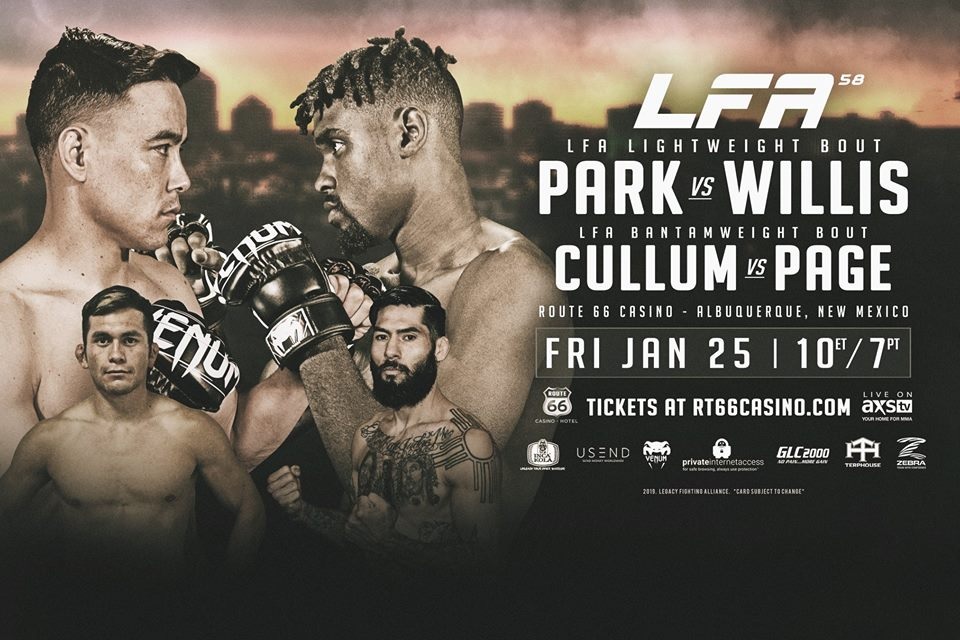 LFA heads to the Land of Enchantment with a Lightweight Showdown at LFA 58 – Park vs. Willis

TICKETS on sale NOW through RT66Casino.com

LAS VEGAS, Nevada – LFA CEO Ed Soares announced today that the promotion will make its first foray into the Land of Enchantment with an explosive lightweight showdown when the promotion heads to New Mexico in January.
The main event of LFA 58 will feature a lightweight showdown between New Mexico Sheriff’s Deputy Harvey “Fightbot” Park and fellow top prospect Jaleel “The Realest” Willis. LFA 58 – Park vs. Willis takes place Friday, January 25th at the Route 66 Casino Hotel in Albuquerque, New Mexico. The entire main card will be televised live and nationwide on AXS TV at 10 p.m. ET / 7 p.m. PT.
“I am thrilled to announce that we are bringing an action-packed LFA event to New Mexico,” stated Soares. “Harvey Park and Jaleel Willis are two of the best lightweight prospects in the sport, and two of the most exciting fighters on the LFA roster. They will make the perfect headliner for the debut LFA event at the world class Route 66 Casino on January 25th.”
Tickets for LFA 58 – Park vs. Willis are available for purchase NOW through RT66Casino.com.
Park (10-2) is a U.S. Navy veteran and Curry County Sheriff’s Deputy from Clovis, New Mexico. The proud New Mexican made his highly-anticipated LFA debut this past May at the highest of locales. That would be on the LFA 39 card that took place in Vail, Colorado. Park fought Austin Hubbard for three competitive rounds that night, but Hubbard won the decision. That earned Hubbard the title shot, which he then won to become champion. However, Park’s momentum did not end there. He also won his next fight in one of the most memorable fights of 2018. After suffering a compound fracture to his right ring finger in the first round of his fight against Le’Ville Simpson at LFA 53, the “Fightbot” continued to press on and throw his right hand with the bone protruding. He did this for three rounds to earn a dominant Unanimous Decision victory as well as national praise from fans and fellow fighters alike for his incredible display of heart and toughness.
Willis (9-1) hails from Memphis, Tennessee and much like the “Home of the Blues”, Willis’ opponents have been singing the blues since he began his illustrious MMA career in 2014. The southern juggernaut known as “The Realest” has dispatched nine of his ten opponents, while competing as a welterweight. His lone setback came via decision in his promotional debut against top welterweight contender Kyle Stewart in the main event of LFA 33 this past February. Willis bounced back beautifully in his sophomore appearance for the promotion in June. That win came against the well-respected Chel-Erwin Davis in the co-main event of LFA 42. Willis needed only 70-seconds to finish the Bellator veteran via TKO due to a monster knee, which he followed up with an onslaught of punches. Now the charismatic Memphian is taking his talents to the lightweight division as he prepares to make his 155-pound debut in the high desert of New Mexico.
The co-main event of LFA 58 could cause a statewide day off from work on January 25th as the long-awaited showdown between two of New Mexico’s most beloved MMA pioneers is among us.
Page (20-10) and Cullum (21-7) have been on a collision course for well over a decade. They helped pave the way for the lower weight classes within the state of New Mexico and throughout the sport of MMA. Both men began competing as professionals in 2005 and went on to carve out two of the biggest fighting legacies in New Mexico’s long combat sports history. Page is a proud Albuquerquean who fought for both the UFC and WEC at bantamweight. He was a cast member on the UFC’s hit reality show The Ultimate Fighter: Tournament of Champions and became a Legacy FC champion at flyweight. While reigning supreme for Legacy FC, he also headlined the historic RFA vs. Legacy event in May 2015.
Meanwhile, Cullum has carved out his own storied career in the Land of Enchantment. Currently serving as a Corporal for his hometown Tucumcari Police Department in eastern New Mexico, Cullum has taken two three-year hiatuses during his fighting career to focus on law enforcement. However, Cullum has once again been drawn back to the Octagon with a desire to add to his own list of MMA accomplishments. The Tucumcari lawman is a five-time KOTC champion, he has fought for the EliteXC (ShoXC) 140-pound title on Showtime, he competed in Japan three times in two Grand Prix tournaments hosted by DREAM, and he won back-to-back RFA co-main events via submission in the span of four weeks.
Currently Announced Main Card (Televised on AXS TV at 10 p.m. ET / 7 p.m. PT):
Main Event | Lightweight Bout (155 lb)
– Harvey Park (10-2) vs. Jaleel Willis (9-1)
Co-Main Event | Bantamweight Bout (135 lb)
– Damacio Page (20-10) vs. Abel Cullum (21-7)

In 2017, RFA and Legacy FC merged to form LFA, the premier developmental organization in Mixed Martial Arts. The combined forces of LFA launched the careers of over 150 athletes that have reached the pinnacle of MMA by competing in the UFC. In May 2018, the promotion joined the London Trust Media Holdings group of companies.
LFA 58 will be the first LFA event to take place in the state of New Mexico. RFA and Legacy FC visited the “Land of Enchantment” a total of three times before the merger. The entire main card of LFA 58 will be televised live and nationwide on AXS TV at 10 p.m. ET / 7 p.m. PT.
Please visit LFAfighting.com for bout updates and information. LFA is on Facebook at Legacy Fighting Alliance. LFA is also on Instagram at @LFAfighting and Twitter at @LFAfighting.
About LFA:
LFA is a professional Mixed Martial Arts promotion that gives rising stars and top contenders the opportunity to prove their talent to fans and leaders in the industry. LFA was formed by the powerhouse merger between RFA and Legacy FC. LFA presents live Mixed Martial Arts events on a monthly basis around the United States including Las Vegas, Los Angeles, Denver, Dallas, and Houston. LFA can be seen live in over 53 million homes nationally through its television deal with AXS TV. Based in Las Vegas, NV, LFA is one of the most active and respected MMA organizations in the fastest growing sport in the world. (The Octagon, Ultimate Fighting Championship®, UFC®, and the eight-sided competition mat and cage design are registered trademarks owned exclusively by Zuffa, LLC. All rights reserved).
About AXS TV FIGHTS:
AXS TV FIGHTS presents more LIVE mixed martial arts and kickboxing events than any other television network every Friday night at 9pE/6pP. Events taking place on the west coast will be televised at 10pE/7pP. UFC Hall of Famer Pat Miletich, and veteran broadcaster Ron Kruck call all the action and Phoenix Carnevale reports from cageside as champions, challengers, and top prospects take center stage. AXS TV Fights can be found online, on Facebook, and on Twitter. AXS TV is widely distributed in the U.S. via AT&T U-verse, Charter, Comcast/Xfinity, DIRECTV, DISH, Sling TV, Suddenlink, Verizon FiOS, and other cable, satellite, telco and streaming providers. The network is also carried in Canada, Mexico, and the Caribbean.
About London Trust Media:
London Trust Media is a diversified business focused on the Internet and media industries – bringing the Internet back to its original state and bringing power back to the people. London Trust Media runs the leading no-log VPN service provider in the world Private Internet Access (PIA) as well as Kore Asian Media, Linux Journal, freenode, Snoonet, JOG, BlockExplorer, and Provocateur. Please visit their website at www.londontrustmedia.com for more information.
About Route 66 Casino:
Get your kicks like never before at Route 66 Casino! Route 66 Casino Hotel and RV Resort is located less than 20 minutes west of downtown Albuquerque. The Route 66 Casino Hotel offers over 1,300 slot and video poker machines, 26 table games, a 500-seat bingo hall, a dedicated poker room with 10 tables, five restaurants, five bars, 8,000 sq. feet of convention space, nightclub, arcade and retail gift shop. Visit RT66Casino.com for more info.