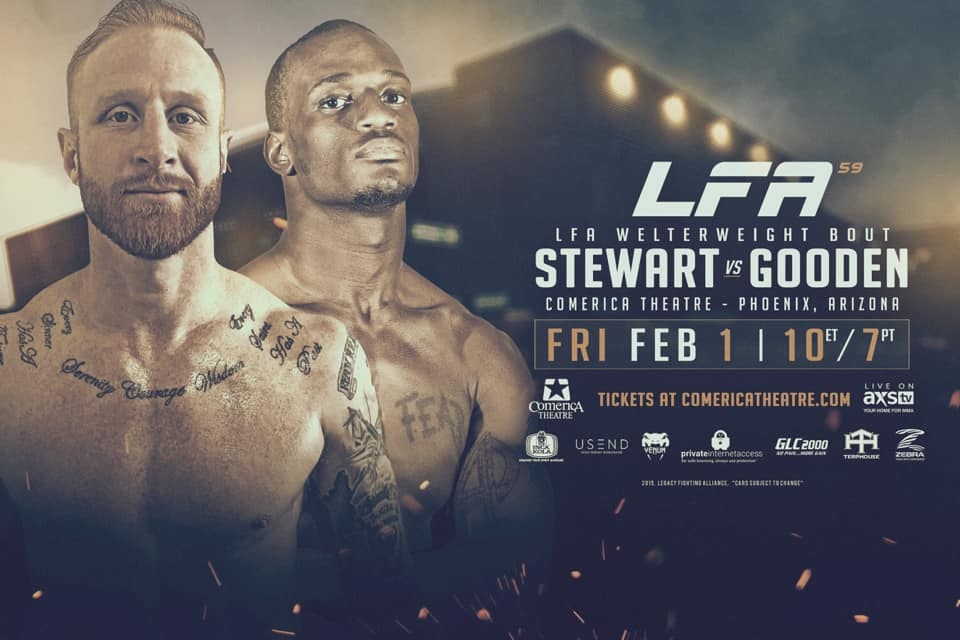 Tickets are on sale NOW through
ComericaTheatre.com

LAS VEGAS, Nevada – LFA CEO Ed Soares announced today that LFA will return to the Valley of the Sun in February with a high-stakes welterweight showdown at the top of LFA 59.

The main event of LFA 59 will bring a welterweight showdown to the state capital of Arizona as U.S. Marine Corps SGT Kyle “Gunz Up” Stewart squares off with surging Legacy FC veteran Jared “Nite Train” Gooden. LFA 59 – Stewart vs. Gooden takes place Friday, February 1st at the Comerica Theatre in Phoenix, Arizona. The main card will be televised live and nationwide on AXS TV at 10 p.m. ET / 7 p.m. PT.

“I am excited to announce that LFA is returning to Arizona on Super Bowl weekend,” stated Soares. “Kyle Stewart is a decorated war hero and one of the most talented fighters in LFA. He will be headlining his third event for us against Jared Gooden, who got his start in Legacy FC, and has built up a fantastic record fighting on the east coast. This is the perfect main event for LFA 59, which will be our sixth event at Comerica Theatre in Phoenix, Arizona.”

Tickets for LFA 59 – Stewart vs. Gooden are available for purchase NOW at ComericaTheatre.com.

Stewart (11-1) is a decorated war hero, achieving the rank of Sergeant in the U.S. Marine Corps while serving multiple tours in Afghanistan. The wildly popular Arizonan skyrocketed to the top of the welterweight rankings by winning his first ten professional fights in MMA. That earned him a shot at the LFA welterweight title this past July at LFA 46. The 29-year-old dropped a competitive five-round decision to the undefeated champion James Nakashima that night, but many saw his stock rise in the back-and-forth title tilt between two top undefeated prospects. “Gunz Up” went back to work and quickly got his hand raised again in November. In the co-main event of LFA 53, Stewart dominated fellow LFA standout Braden Smith and now has his sights set on another top prospect in the main event of LFA 59.

Gooden (12-2) makes his LFA debut after getting his start with Legacy FC back in 2015. The 25-year-old southerner is following a similar path to success as highly-touted LFA bantamweight Raufeon Stots. Both men made their pro MMA debut in 2015 and found them self competing for Legacy FC in their second pro bout that same year. Gooden and Stots won those signature bouts before running roughshod over local competition in their respective regions. Stots returned to the newly formed LFA in 2018 and continued his success. Now Gooden looks to follow suit. The man known as “Nite Train” is headed full-speed across the country to the sunny desert of Arizona. The collision course is set for the main event of LFA 59 and will it will take place on AXS TV, the network that launched his career in 2015.

LFA 59 will be the sixth LFA event to take place in the state of Arizona. All of these events have taken place in the Grand Canyon State’s capital city of Phoenix. The entire main card of LFA 59 will be televised live and nationwide on AXS TV at 10 p.m. ET / 7 p.m. PT.

About Comerica Theatre:
Comerica Theatre is a 5,000 seat entertainment venue located in the heart of downtown Phoenix. The unique design of Comerica Theatre has changed the way people think about live entertainment, as it marries the classic theatre style with the pulsating excitement of modern arena technologies. The theatre’s state-of-the art music & sound systems are perfect for concerts, comedy performances as well as theatre and family friendly shows. Visit ComericaTheatre.com for more info.