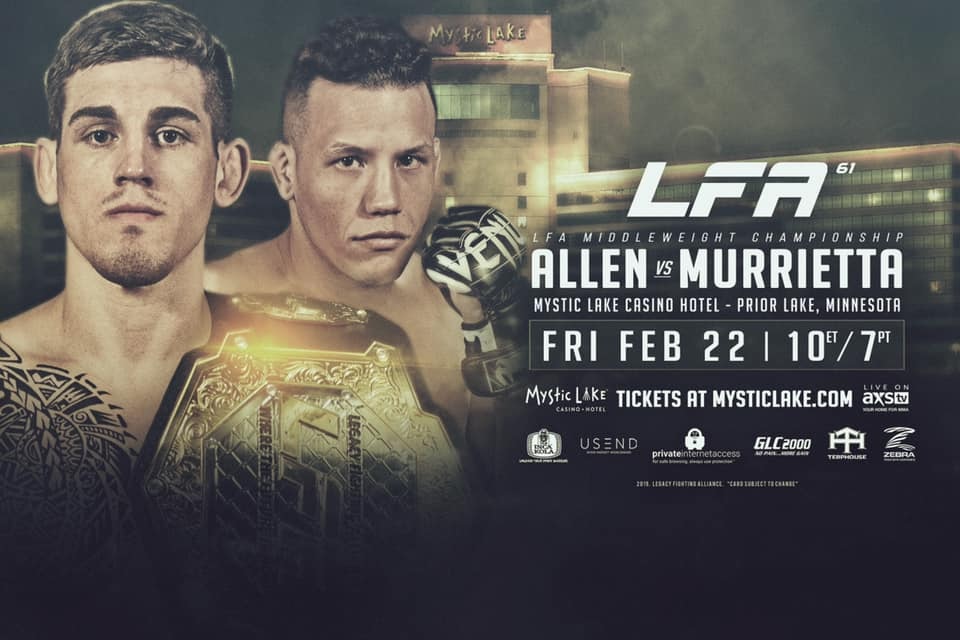 LFA finalizes busy February with Doubleheader in the Upper Midwest

Tickets for LFA 60 are available for purchase NOW at LFAtix.com.

Tickets for LFA 61 are available for purchase NOW at MysticLake.com.

LAS VEGAS, Nevada – LFA CEO Ed Soares announced today that the promotion will finish a busy month of February with a doubleheader in the Upper Midwest as LFA travels to Iowa and Minnesota on back-to-back Fridays.

LFA will make its first foray into the “Hawkeye State” of Iowa with LFA 60. The promotion will be heading to the Des Moines metro area for the first time after the merger of RFA and Legacy FC. RFA traveled to Iowa once before the merger at RFA 10 in October 2013. The main event of LFA 60 will be announced soon. LFA 60 takes place Friday, February 15th at the 7 Flags Event Center in Clive, Iowa. The main card will be televised live and nationwide on AXS TV at 10 p.m. ET / 7 p.m. PT.

LFA will then head north the following week to the “Land of 10,000 Lakes” for LFA 61. The main event of LFA 61 will bring a middleweight world title fight to Minnesota as LFA middleweight champion Brendan “All In” Allen defends his title for the first time against knockout artist and top contender Moses “Motown” Murrietta. LFA 61 – Allen vs. Murrietta takes place Friday, February 22nd at the Mystic Lake Casino Hotel in Prior Lake, Minnesota. The main card will be televised live and nationwide on AXS TV at 10 p.m. ET / 7 p.m. PT.

“I am excited to bring LFA to the Upper Midwest on back-to-back Fridays in February,” stated Soares. “Iowa and Minnesota have a long history in MMA and wrestling so it has one of the most educated and passionate fan bases in the country. We came to Iowa as RFA in October 2013 and have had a long history of exciting events in Minnesota. We look forward to developing the next generation of stars in this talent-rich region in February at LFA 60 and LFA 61.”

Tickets for LFA 60 are available for purchase NOW at LFAtix.com.

Tickets for LFA 61 are available for purchase NOW at MysticLake.com.

LFA 61 will be the tenth LFA event to take place in the state of Minnesota. RFA and Legacy FC hosted a combined nine events in the “Land of 10,000 Lakes” before the merger. Six of those events took place under the RFA banner inside the Mystic Lake Casino Hotel. The entire main card of LFA 61 will be televised live and nationwide on AXS TV at 10 p.m. ET / 7 p.m. PT.

About 7 FLAGS EVENT CENTER:
Known as the hot spot for stunning shows, fun events and great entertainment, 7 Flags Event Center is located in Clive Iowa, a suburb of Des Moines, Iowa. Located conveniently off of Interstate 35 , the multi-purpose, state-of-the-art arena is the premier entertainment destination of Polk County. The event center has hosted a multitude of concerts by internationally recognized artists such as Ted Nugent, Luke Bryan, Night Ranger, Joan Jett, Alan Jackson and Willie Nelson.