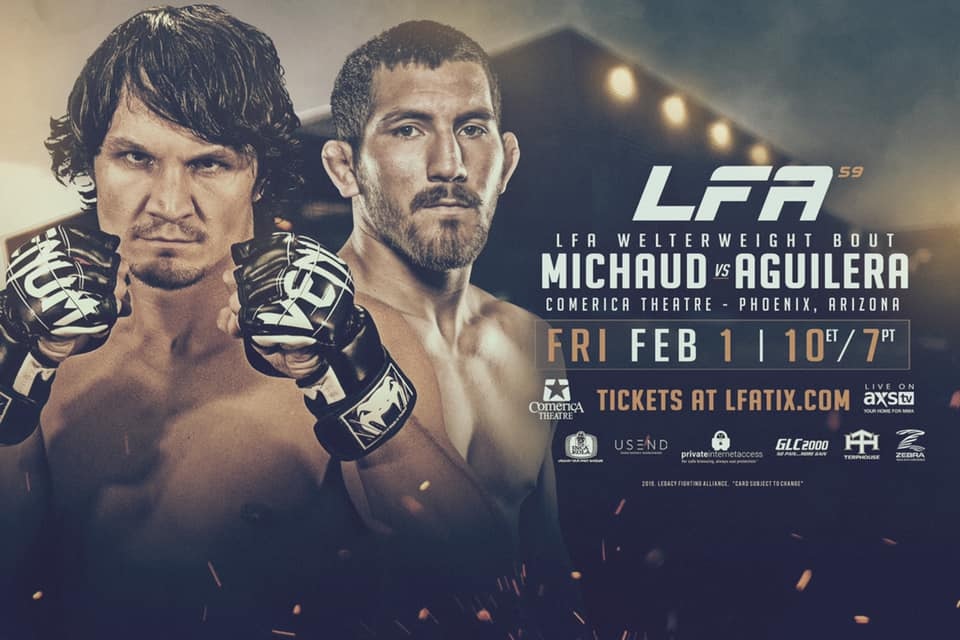 LAS VEGAS, Nevada – LFA CEO Ed Soares announced today that LFA will return to the Valley of the Sun in February with a new high-stakes welterweight showdown at the top of LFA 59. The change at the top of LFA 59 occurred when previous headliner Kyle Stewart was signed to the UFC. Mario Bautista was scheduled to fight on this card as well, but was also replaced after receiving a UFC contract.

The main event of LFA 59 will now bring an explosive welterweight showdown to the state capital of Arizona when UFC veteran David “Bulldawg” Michaud squares off with heavy-handed Christian “The Beast” Aguilera. LFA 59 – Michaud vs. Aguilera takes place Friday, February 1st at the Comerica Theatre in Phoenix, Arizona. The main card will be televised live and nationwide on AXS TV at 10 p.m. ET / 7 p.m. PT.

“LFA is returning to Arizona on Super Bowl weekend with a new welterweight main event,” stated Soares. “Kyle Stewart and Mario Bautista both received well-deserved UFC contracts and will not be competing on this card. The new main event will feature a pair of heavy-handed LFA fan favorites as David Michaud faces Christian Aguilera. This will be an exciting main event for LFA 59, which will be our sixth event at Comerica Theatre in Phoenix, Arizona.”

Tickets for LFA 59 – Michaud vs. Aguilera are available for purchase NOW at LFAtix.com.

Michaud (14-4) is one of the most successful athletes from the state of South Dakota. Born and raised on the Pine Ridge Indian Reservation, he won a South Dakota state title in wrestling for Pine Ridge High School. Michaud went on to wrestle at the NCAA Division I level for South Dakota State University. After making the transition to MMA, he relocated to Arizona to train at one of the best gyms in the world. The longtime MMA LAB standout has competed at the highest level of the sport. Michaud was a contestant on the sixteenth season of the UFC’s hit reality show The Ultimate Fighter and fought three times for the UFC. Since leaving the UFC, Michaud has earned dominant wins for RFA, LFA, and Bellator. The man known as “BullDawg” now returns to the LFA Octagon in the main event of LFA 59.

Aguilera (11-5) has earned a reputation for possessing some of the scariest one-punch knockout power in all of MMA. LFA brass witnessed his gift of putting people to sleep early on in his career when he gave Timothy Quiroga a canvas nap just 52-seconds into his third pro fight at RFA 23.”The Beast” spent the next four years honing his craft under the tutelage of Colin Oyama and Tyler Wombles in southern California. Now bigger, better, and inconceivably more powerful, Aguilera is wielding his gift at an alarming pace. After making his LFA debut last year, he needed less than one round to dispatch two highly-touted Brazilian prospects. Now the talented knockout artist is taking aim at a true veteran of the sport. The explosive encounter with Michaud happens next week in the main event of LFA 59.

LFA 59 will be the sixth LFA event to take place in the state of Arizona. All of these events have taken place in the Grand Canyon State’s capital city of Phoenix. The entire main card of LFA 59 will be televised live and nationwide on AXS TV at 10 p.m. ET / 7 p.m. PT.

About Comerica Theatre:
Comerica Theatre is a 5,000 seat entertainment venue located in the heart of downtown Phoenix. The unique design of Comerica Theatre has changed the way people think about live entertainment, as it marries the classic theatre style with the pulsating excitement of modern arena technologies. The theatre’s state-of-the art music & sound systems are perfect for concerts, comedy performances as well as theatre and family friendly shows. Visit ComericaTheatre.com for more info.