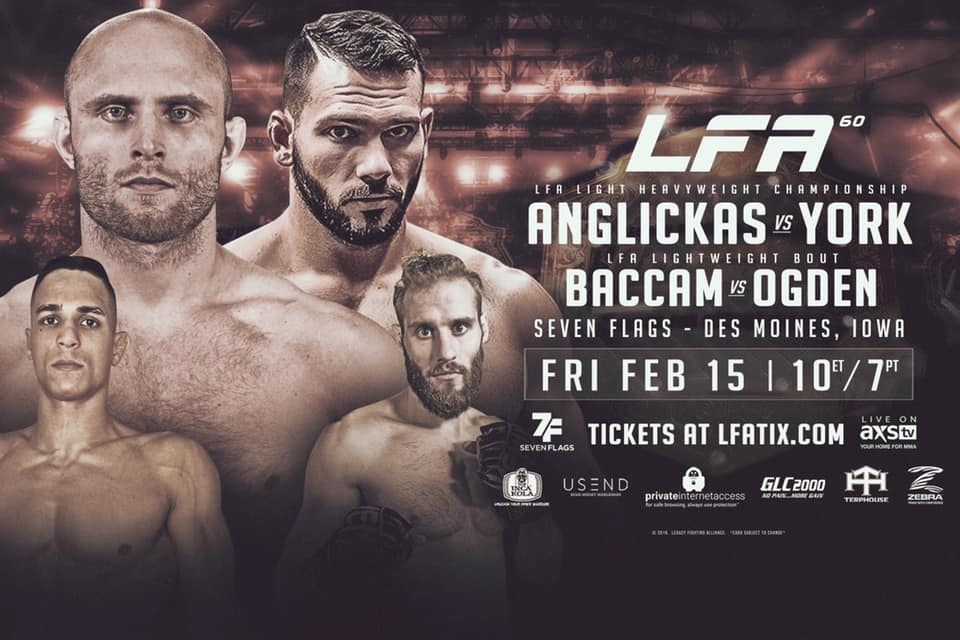 LFA soars into the Hawkeye State with a Light-Heavyweight Title Fight at LFA 60 – Anglickas vs. York

LAS VEGAS, Nevada – LFA CEO Ed Soares announced today that LFA will make its first trip to the Hawkeye State in February with a light-heavyweight title fight at the top of LFA 60.

“I am excited to bring LFA to Iowa,” stated Soares. “Iowa has a long history in MMA and wrestling so it has some of the most educated and passionate fans in the sport. We came to Iowa as RFA in October 2013 and many of those fighters went on to become stars in the sport. Four were signed by the UFC and another four went to Bellator. We look forward to producing the next generation of MMA stars when we return with a light-heavyweight title fight at LFA 60.”

Tickets for LFA 60 – Anglickas vs. York are available for purchase NOW at LFAtix.com.

Anglickas (5-1) is a native of Plungė, Lithuania who currently lives and trains in St. Louis, Missouri. The 27-year-old prospect quickly climbed the light-heavyweight rankings after making his pro debut three years ago. He has won five of six as a pro after compiling a perfect amateur record. The Lithuanian standout is a fearsome finisher that is currently riding a four-fight win streak. The most notable win in that streak came in his LFA debut last summer at LFA 42, where he submitted Erick Murray Jr. via Rear Naked Choke. That win was impressive enough to earn Anglickas a shot at the LFA light-heavyweight title, which was vacated 11 days after his LFA debut when the inaugural champion Ryan Spann signed with the UFC.

York (5-0) will get an immediate shot at LFA gold after the former Oregon State University fullback ran roughshod over the MMA scene in his native Pacific Northwest. The 28-year-old blue-chip prospect looks to follow in the footsteps of fellow Portland area standout Ricky Simón. The current UFC bantamweight dominated the Pacific Northwest regional scene before capturing LFA gold and then receiving a UFC contract last year. York was Honorable Mention All-State his senior season at Redmond High School before joining NCAA Division I powerhouse Oregon State. The man known as “C-4” starred as a fullback and special teams player for the Beavers before bursting on to the MMA scene two years ago.