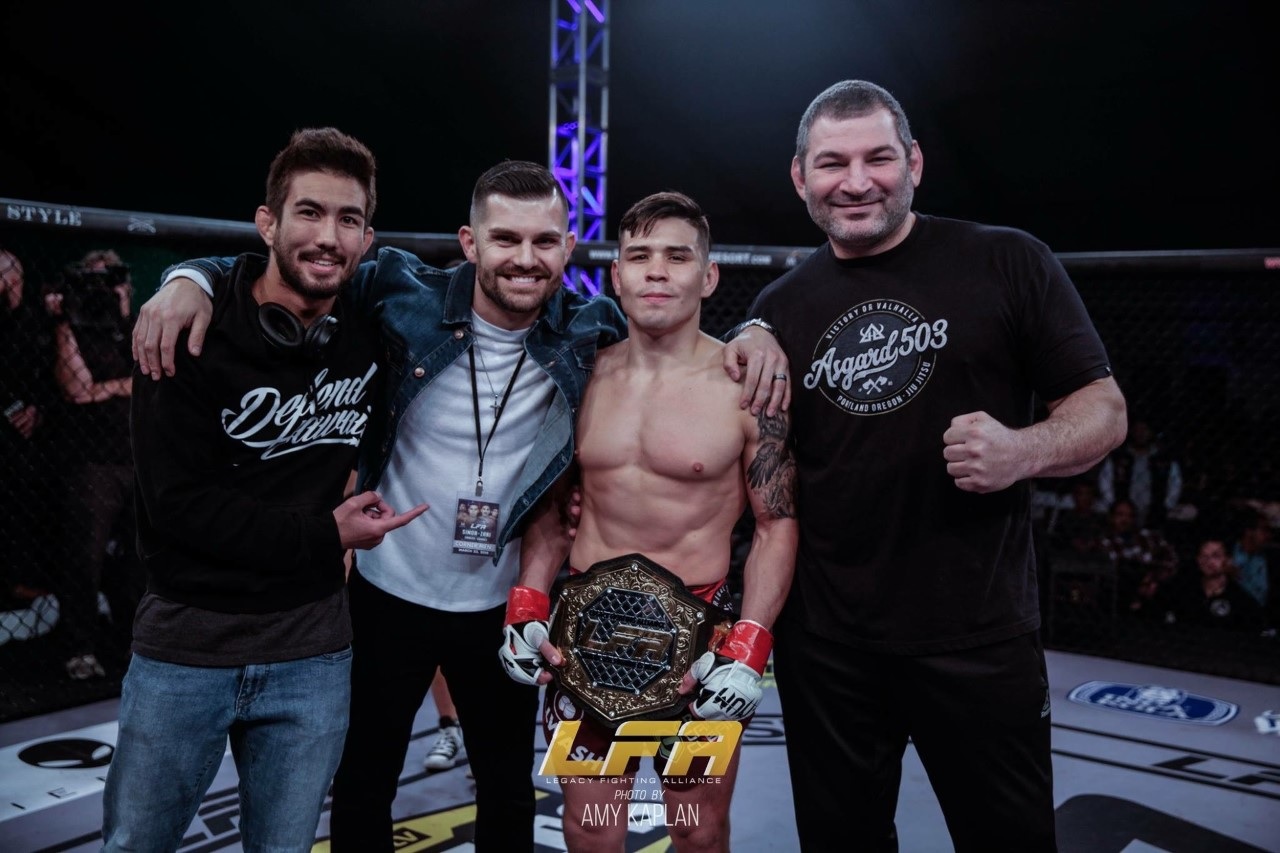 LFA alum bring the thunder Down Under at UFC 234

LAS VEGAS, Nevada — Legacy Fighting Alliance (LFA) and the two promotions that merged to create it, RFA and Legacy FC, were well-represented when the UFC traveled down under to Australia over the weekend.

Four former fighters competed, which included three on the main card that was televised on pay-per-view. The four fighters included Lando Vannata, Ricky Simón, Montana De La Rosa, and Jonathan Martinez. All four fighters were victorious and one of the wins resulted in a $50,000 “Performance of the Night” bonus.

“I am always excited to watch our former fighters do well in the UFC,” stated LFA CEO Ed Soares. “I was fortunate to be there live in Australia to witness what LFA has set out to do. We develop top prospects, so when they get to the UFC, they continue to dominate against the best in the world.”

RFA standout “Groovy” Lando Vannata made the most of a last-minute opportunity by securing one of the biggest wins of his career. After the UFC lost its main event on Saturday morning, due to an injury to middleweight champion Robert Whittaker, the UFC quickly elevated Vannata’s bout with Brazilian lightweight Marcos Mariano to co-main event status. The flashy Albuquerque based striker showed a new wrinkle to his game by dominating with wrestling and grappling. Vannata put an end to things by submitting Mariano with a Kimura from north-south at the end of the first round.

Former LFA bantamweight champion Ricky Simón ran his UFC record to 3-0 with a masterful performance against jiu-jitsu ace and top-ranked bantamweight Rani Yahya. The Portland based powerhouse battered his Brazilian opponent with strikes throughout the contest, while stuffing all ten takedown attempts from the world champion jiu-jitsu black belt. The dominant effort earned Simón a lopsided Unanimous Decision with scores of 30-27, 30-27, 30-25. The win should propel Simón comfortably into the UFC bantamweight rankings.

The main card also saw LFA fan favorite Montana De La Rosa run her UFC record to 3-0. The Fort Worth based flyweight dominated her fight with previously undefeated Australian prospect Nadia Kassem. After showing off her wrestling chops in the first round, De La Rosa went right back to work on the ground in round two. The Texan locked in an armbar midway through the round, which forced a verbal submission. De La Rosa has now won all of her UFC fights via submission and tied the longest active UFC win streak in the women’s flyweight division at three. The win also earned her a $50,000 “Performance of the Night” bonus.

Jonathan Martinez got things moving in the right direction in the first fight of the night. The Legacy FC product picked up his first UFC win with an entertaining encounter with Chinese bantamweight Wuliji Buren. “Dragon” stayed one step ahead of Buren with opportunistic reversals in what turned into a technical chess match on the ground. The Texan was pulled from an LFA card in October to make a short notice UFC debut in Canada instead. Now the world got to see what he can do with a full camp to prepare for an opponent.

LFA returns this Friday, February 15th with LFA 60 – Anglickas vs. York. The main event will feature a light-heavyweight title bout between Lithuanian prospect Julius Anglickas and former Oregon State football player Clayton “C-4” York. The event will take place at the Seven Flags Event Center in Clive, Iowa, which is in the Des Moines metro area. The main card will be televised live and nationwide on AXS TV at 10 p.m. ET / 7 p.m. PT.

LFA is a professional Mixed Martial Arts promotion that gives rising stars and top contenders the opportunity to prove their talent to fans and leaders in the industry. LFA was formed by the powerhouse merger between RFA and Legacy FC. LFA presents live Mixed Martial Arts events on a monthly basis around the United States including Las Vegas, Los Angeles, Denver, Dallas, and Houston. LFA can be seen live in over 53 million homes nationally through its television deal with AXS TV. Based in Las Vegas, NV,  LFA is one of the most active and respected MMA organizations in the fastest growing sport in the world. (The Octagon, Ultimate Fighting Championship®, UFC®, and the eight-sided competition mat and cage design are registered trademarks owned exclusively by Zuffa, LLC. All rights reserved).

AXS TV FIGHTS presents more LIVE mixed martial arts and kickboxing events than any other television network every Friday night at 9pE/6pP. Events taking place on the west coast will be televised at 10pE/7pP.  UFC Hall of Famer Pat Miletich, and veteran broadcaster Ron Kruck call all the action and Phoenix Carnevale reports from cageside as champions, challengers, and top prospects take center stage. AXS TV Fights can be found online, on Facebook, and on Twitter. AXS TV is widely distributed in the U.S. via AT&T U-verse, Charter, Comcast/Xfinity, DIRECTV, DISH, Sling TV, Suddenlink, Verizon FiOS, and other cable, satellite, telco and streaming providers. The network is also carried in Canada, Mexico, and the Caribbean.