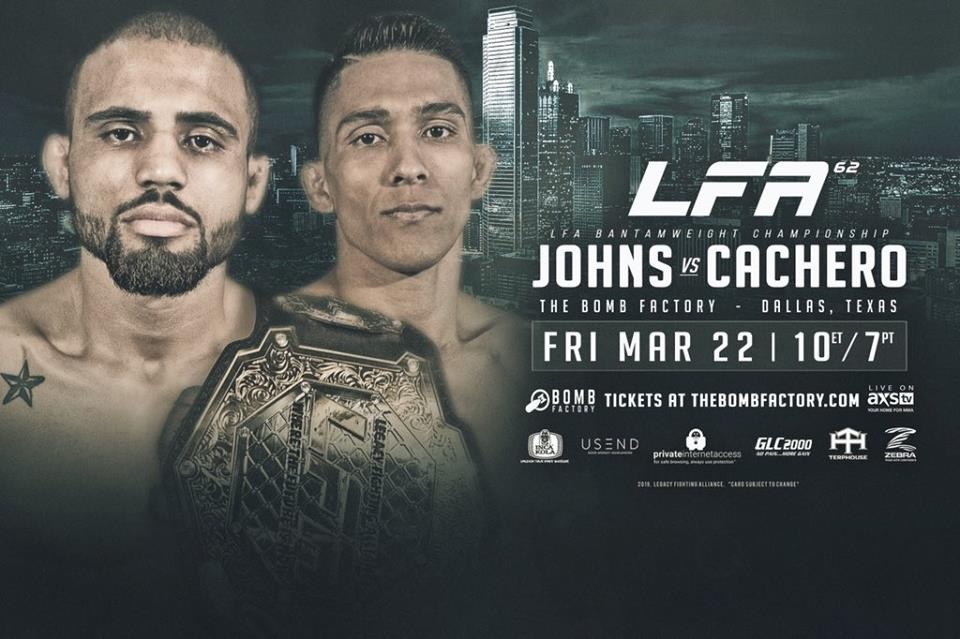 LFA returns to Dallas with Bantamweight Title Fight at LFA 62 – Johns vs. Cachero

FRIDAY, MARCH 22nd LIVE on AXS TV
THE BOMB FACTORY in DALLAS, TEXAS
Tickets are on sale NOW through TheBombFactory.com

LAS VEGAS, Nevada — LFA CEO Ed Soares announced today that the promotion will be bringing a bantamweight title fight to Texas when the promotion returns to Dallas in March.

The main event of LFA 62 will feature a world title fight when LFA bantamweight champion Miles “Chapo” Johns defends his title for the first time against fellow top undefeated prospect Vince “The Anomaly” Cachero. LFA 62 – Johns vs. Cachero takes place this Friday, March 22nd at The Bomb Factory in Dallas, Texas. The entire main card will be televised live and nationwide on AXS TV at 10 p.m. ET / 7 p.m. PT.

“I am excited to bring the LFA bantamweight championship back to the birthplace of LFA,” stated Soares. “Miles Johns won the title in November in the same venue. He is now looking to keep the title in Dallas with his first title defense. He will face fellow undefeated prospect and top contender Vince Cachero on Friday, March 22nd at The Bomb Factory in Dallas, Texas.”

Tickets for LFA 62 – Johns vs. Cachero are available for purchase NOW at TheBombFactory.com.

Johns (8-0) heads into his first title defense after defeating Adrian Yanez for the vacant strap in November at LFA 55. The Kansas native, who now calls Dallas home, gets the chance to defend his strap on home turf. That would solidify him as the undisputed top bantamweight prospect in the world. The powerhouse known as “Chapo” earned his fearsome nickname for his ruthless demeanor inside the Octagon. The 24-year-old Fortis MMA standout has won all four of fights for LFA and Legacy FC (before the merger), which includes his crowning achievement eight days after Thanksgiving. Johns now looks to begin an ironfisted title reign against another top prospect at LFA 62.

Cachero (6-0) is one of the most exciting prospects in the sport, who comes from a proud Hawaiian fighting culture. The Oahu native, who now calls Los Angeles home, gets his shot at LFA gold after compiling a perfect 6-0 record with four of those wins coming inside the LFA Octagon. More impressively is the fact that “The Anomaly” won his last five fights against Joe Murphy, Carlos Puente Jr, Nohelin Hernandez, Ryan Lilley, and Arnold Jimenez. That fearsome five have all fought for LFA with three having won in an LFA co-main event. The 29-year-old Black House MMA product is now ready to headline his first LFA event, defeat another top prospect, and capture his first world title at LFA 62.

LFA 62 will be the eighth LFA event to take place in the City of Dallas. It will also be the fifteenth time that LFA has traveled to “The Lone Star State” of Texas. The entire main card of LFA 62 will be televised live and nationwide on AXS TV at 10 p.m. ET / 7 p.m. PT.