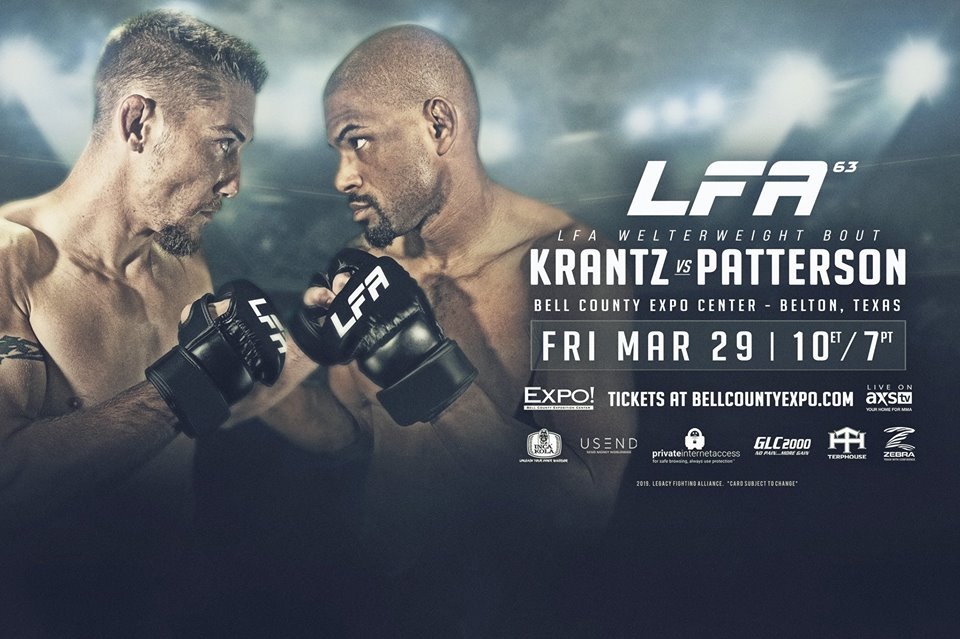 LFA to host a long-awaited showdown Deep in the Heart of Texas at LFA 63 – Krantz vs. Patterson

PLUS THE RETURN OF BAYLOR UNIVERSITY’S
TWO-TIME NCATA ALL-AMERICAN:

LAS VEGAS, Nevada — LFA CEO Ed Soares announced today that the promotion will head deep in the heart of Texas in March with a long-awaited welterweight showdown at the top of LFA 63.

“I am excited to bring LFA back to the Centroplex of Texas at LFA 63,” stated Soares. “Derrick Krantz and Justin Patterson are both proud Texans and two of our top welterweights. Krantz was the inaugural LFA welterweight champion. He is looking to get back into title contention against Patterson, who also has his sights set on divisional gold. They finally get to face each other in the main event of LFA 63 at the Bell County Expo Center on Friday, March 29th.”

Tickets for LFA 63 – Krantz vs. Patterson are available for purchase NOW at BellCountyExpo.com.

Krantz (23-10) captured the inaugural LFA welterweight championship in 2017 with a classic “D-Rock” performance. The Texas powerhouse, who is always gunning for a firefight, unloaded his fistolas on Ben Neumann in the main event of LFA 12 to capture his second world title. Two years prior to LFA 12, Krantz accomplished a nearly identical feat against UFC vet Brock Larson to win the Legacy FC welterweight title. Krantz lost his LFA title via controversial Split Decision in a closely contested bout with former University of Nebraska wrestling standout James Nakashima at LFA 23, but bounced back with a dominant win over longtime LFA and RFA standout Kassius Kayne at LFA 42. The 31-year-old former champ now returns in the main event of LFA 63 against another top welterweight, who has also made a name for himself in the promotion.

Patterson (11-4) is perhaps the only top Texas based welterweight that Krantz has not faced. While Krantz has twice the amount of pro experience, Patterson is actually two years younger. Patterson showed early promise in the sport by competing for Legacy FC as an amateur before defeating former LFA middleweight champion and current UFC star Eryk Anders also as an amateur. The bout took place at 205-pounds when both men were still green in the sport, but that combined with winning his first six pro fights, caught the attention of Bellator officials. “The Tactician” would spend half his career fighting for Bellator before signing with LFA late last year. Patterson wasted no time showing off his formidable skill set, picking up a win over Ramiz Brahimaj at LFA 55. Now he looks to take out the former champ at LFA 63.

The co-main event of LFA 63 could determine the next top contender in the stacked LFA featherweight division. Undefeated Texan Jake “The Grinder” Heffernan (7-0) will look to defend his Texas home turf against fellow undefeated prospect Gabriel “Gabito” Silva (6-0). Silva is the younger brother of longtime UFC star Erick Silva. Heffernan made a big statement in his LFA debut last summer by dominating Peter Stanonik in the co-main event of LFA 43. Meanwhile, Silva will be looking to do the same in his LFA debut, which will also be the first time that the highly-touted prospect will fight in North America.

The feature fight of LFA 63 will see the return of wildly popular women’s flyweight prospect “All Hail” Hailey Cowan (2-1). Cowan signed with LFA last year to much fanfare. She was a two-time National Collegiate Acrobatics & Tumbling Association (NCATA) All-American at nearby Baylor University. She then went 3-0 as an amateur fighter, which includes a TKO win in her final amateur fight at LFA 33. As many MMA pundits suspected, Cowan’s superior athletic ability began to manifest itself into fearsome fighting potential later in 2018. Cowan needed only 69-seconds to pick up her first pro win at LFA 52, only to return six weeks later with an even more impressive performance. The dynamic Texan landed a head kick KO at LFA 55 that quickly went viral on the Internet and showed the world that the hype is real.

LFA 63 will be the second LFA event to take place in the Centroplex of Texas. It will also be the sixteenth time that LFA has traveled to “The Lone Star State” of Texas. The entire main card of LFA 63 will be televised live and nationwide on AXS TV at 10 p.m. ET / 7 p.m. PT.