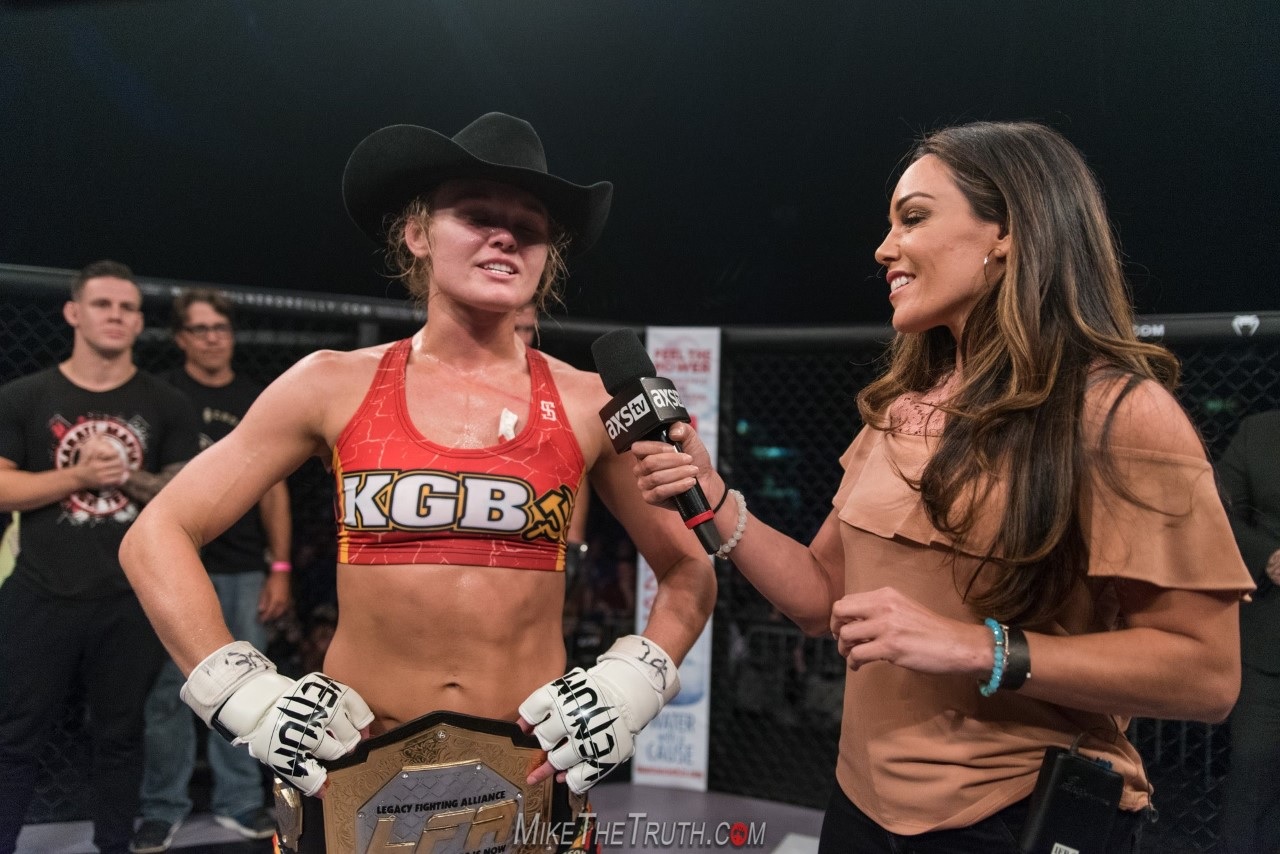 LFA alum perfect in Arizona at UFC on ESPN 1

Calvillo, Lee, Sanders, and Whitmire run streak to 8-0 in 8 days

LAS VEGAS, Nevada — Legacy Fighting Alliance (LFA) and the two promotions that merged to create it, RFA and Legacy FC, have now seen its alum go 8-0 in the UFC in 8 days.In only eight days, eight former fighters have gone 8-0 in the UFC. Last week, Lando Vannata, Ricky Simón, Montana De La Rosa, and Jonathan Martinez were victorious at UFC 234 in Australia. Last night, four more followed suit with Cynthia Calvillo, Andrea Lee, Luke Sanders, and Emily Whitmire all getting their hands raised at UFC on ESPN 1 in Arizona. Also like last week, one of the wins resulted in a $50,000 “Performance of the Night” bonus.

“I am excited every time I watch our former fighters compete in the UFC,” stated LFA CEO Ed Soares. “Last week, we went 4-0 in Australia. Last night, we went 4-0 in Arizona. This current streak of 8-0, shows that when our fighters get to the UFC, they continue to impress against the best fighters in the world.”

Cynthia Calvillo was the first LFA alum to sign with UFC after the merger of RFA and Legacy FC in January 2017. Last night, she accomplished another first. She became the first female fighter to win a bout on the main card of a UFC event televised live on ESPN. She did so by defeating the seasoned-veteran and local favorite Cortney Casey in a three round war that played out primarily on the feet. Calvillo got to showcase her boxing skills after making a name for herself by dominating most fights on the ground.

Former LFA and Legacy FC women’s flyweight champion Andrea “KGB” Lee stayed perfect inside the UFC Octagon after making a successful UFC debut last May in Chile. The Louisiana based Texan got to showcase her world class Muay Thai skills throughout the contest as she battered her game opponent Ashlee Evans-Smith en route to a Unanimous Decision victory. Both fighters were ranked heading into this contest, which likely means Lee could now be cracking the Top 10 with another high-profile bout in her near future.

RFA alum Emily “Spitfire” Whitmire kicked off the event in spectacular fashion. The Las Vegas based Washingtonian needed only 61-seconds to secure a submission victory via Rear Naked Choke. The win came against the previously undefeated Moldovan born Russian fighter Alexandra Albu. This was Whitmire’s first professional win via finish and more impressively, her lightning quick choke was recorded as the fastest submission victory in UFC strawweight history.

The main event will feature a middleweight title bout between LFA middleweight champion Brendan “All In” Allen and top contender Moses Murrietta. The event will take place at the Mystic Lake Casino Hotel in Prior Lake, Minnesota, which is located 25 minutes southwest of Minneapolis / St. Paul. The main card will be televised live and nationwide on AXS TV at 10 p.m. ET / 7 p.m. PT.

Tickets are on sale NOW at MysticLake.com.

LFA 61 will be the tenth LFA event to take place in the state of Minnesota. RFA and Legacy FC hosted a combined nine events in the “Land of 10,000 Lakes” before the merger. Six of those events took place under the RFA banner inside the Mystic Lake Casino Hotel. The entire main card of LFA 56 will be televised live and nationwide on AXS TV at 10 p.m. ET / 7 p.m. PT.

LFA is a professional Mixed Martial Arts promotion that gives rising stars and top contenders the opportunity to prove their talent to fans and leaders in the industry. LFA was formed by the powerhouse merger between RFA and Legacy FC. LFA presents live Mixed Martial Arts events on a monthly basis around the United States including Las Vegas, Los Angeles, Denver, Dallas, and Houston. LFA can be seen live in over 53 million homes nationally through its television deal with AXS TV. Based in Las Vegas, NV,  LFA is one of the most active and respected MMA organizations in the fastest growing sport in the world. (The Octagon, Ultimate Fighting Championship®, UFC®, and the eight-sided competition mat and cage design are registered trademarks owned exclusively by Zuffa, LLC. All rights reserved).

AXS TV FIGHTS presents more LIVE mixed martial arts and kickboxing events than any other television network every Friday night at 9pE/6pP. Events taking place on the west coast will be televised at 10pE/7pP.  UFC Hall of Famer Pat Miletich, and veteran broadcaster Ron Kruck call all the action and Phoenix Carnevale reports from cageside as champions, challengers, and top prospects take center stage. AXS TV Fights can be found online, on Facebook, and on Twitter. AXS TV is widely distributed in the U.S. via AT&T U-verse, Charter, Comcast/Xfinity, DIRECTV, DISH, Sling TV, Suddenlink, Verizon FiOS, and other cable, satellite, telco and streaming providers. The network is also carried in Canada, Mexico, and the Caribbean.