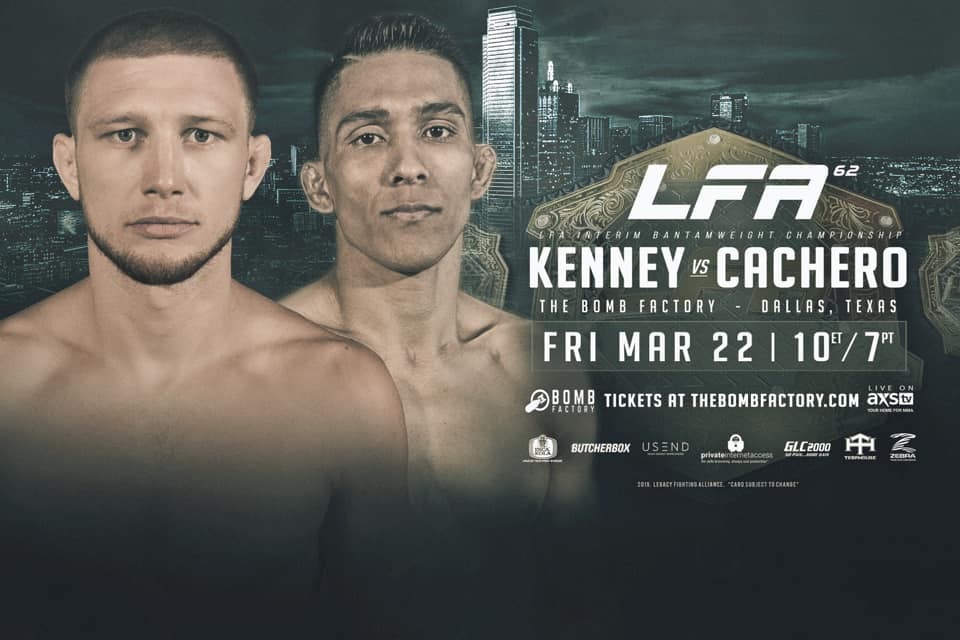 Tickets are on sale NOW through TheBombFactory.com

LAS VEGAS, Nevada – LFA CEO Ed Soares announced today that there has been a change at the top of LFA 62 in Dallas, Texas. LFA bantamweight champion Miles Johns has withdrawn from his title defense in the main event of LFA 62 due to a hand injury. LFA interim flyweight champion Casey Kenney will now step in to face undefeated top contender Vince Cachero for the LFA interim bantamweight title.

“LFA bantamweight champion Miles Johns was forced to withdraw from his first title defense due to a hand injury,” stated Soares. “Top contender Vince Cachero will now face our interim flyweight champion Casey Kenney for the LFA interim bantamweight title next week when LFA returns to The Bomb Factory in Dallas, Texas at LFA 62.”

Tickets for LFA 62 – Kenney vs. Cachero are available for purchase NOW at TheBombFactory.com.

Kenney (10-1-1) is looking to become LFA’s first two-division champion. In November, he was scheduled to face LFA flyweight champion Maikel Perez for the title at LFA 53. However, the week before the fight, Perez withdrew with an injury and Kenney nearly lost his title shot. That is when Brandon Royval stepped up on short notice. They fought for the LFA interim flyweight title in an entertaining affair, which saw Kenney come out on top. Now he is looking to pay it forward. When LFA bantamweight champion Miles Johns withdrew from his title defense this weekend, undefeated top contender Vince Cachero was left in limbo. Now Kenney is the man stepping up on short notice. He will be moving up a weight class to 135-pounds, where he has already proven himself with a win over three-time UFC veteran Roman Salazar at LFA 44.

Cachero (6-0) is one of the most exciting prospects in the sport, who comes from a proud Hawaiian fighting culture. The Oahu native, who now calls Los Angeles home, gets his shot at LFA gold after compiling a perfect 6-0 record with four of those wins coming inside the LFA Octagon. More impressively is the fact that the man known as “The Anomaly” won his last five fights against Joe Murphy, Carlos Puente Jr, Nohelin Hernandez, Ryan Lilley, and Arnold Jimenez. That fearsome five have all fought for LFA with three having won in an LFA co-main event. The 29-year-old Black House MMA product is now ready to headline his first LFA event, defeat another top prospect, and capture his first world title. In order to do that, Cachero must defeat a man at LFA 62, who is looking to become the first champ-champ in LFA history.