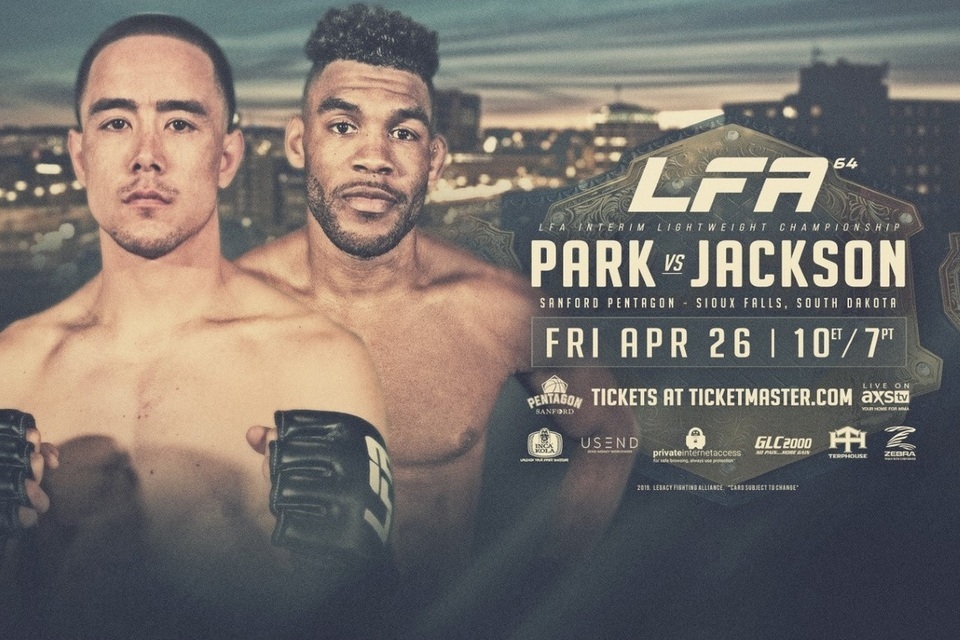 “I am excited to bring LFA back to South Dakota at LFA 64,” stated Soares. “Harvey Park and Demarques Jackson are two of the most exciting prospects in the sport. They will face each other for the LFA interim lightweight title, while the champion Austin Hubbard takes time off. The winner of Park vs. Jackson will face Hubbard to unify the title later this year. On, Friday, April 26th, we will add the next chapter to the state’s history, which began with its first sanctioned event at RFA 17.”

Tickets for LFA 64 – Park vs. Jackson are available for purchase NOW at Ticketmaster.com.

Park (11-2) is a U.S. Navy veteran and Curry County Sheriff’s Deputy from Clovis, New Mexico. He made his LFA debut last May in the high altitude of Vail, Colorado. Park fought Austin Hubbard in a back-and-forth fight, but Hubbard won the decision. That earned Hubbard a title shot, which he won to become champion. Park used that fight as motivation. He won his next two fights in emphatic fashion, including one of the most memorable fights of 2018. After suffering a compound fracture to his right ring finger in the first round of his fight against Le’Ville Simpson at LFA 53, the “Fightbot” cruised to a dominant win in Arizona with the bone protruding. Two months later, Park stopped Jaleel Willis via a first round TKO in the main event of LFA 58 in his home state of New Mexico. The lively lawman now has his sights set on LFA gold.

Jackson (10-2) will be returning to the venue where he announced his arrival to the promotion and the global MMA scene ten months ago at LFA 37. The Hard Knocks 365 product flew in from south Florida like a hurricane last spring. He only needed 1 minute and 48 seconds to blow away Hamilton Ash in the first round with a highlight reel knock out. The man known as “Scrap Iron” picked up another win over Bryce Logan in Bellator only to return to the LFA Octagon with another stunning first round finish in December. Jackson showed off his submission game by tapping Bobby Lee via Guillotine Choke in the co-main event of LFA 56. The dynamic lightweight looks to stay hot when he meets a man that made his LFA debut just two weeks after him in 2018. Jackson returns to Sioux Falls at LFA 64. This time on a quest for LFA gold.

LFA has also produced stars in its first three visits to the state since the merger of RFA and Legacy. Two fighters went on to sign with the UFC and ten more would go on to fight for Bellator.

Sabina Mazo won the LFA women’s flyweight title during the LFA’s most recent trip to the state at LFA 37. She became the first Colombian world champion in MMA and the first female world champion in MMA to be crowned in South Dakota. She is scheduled to make her UFC debut on March 30th at UFC on ESPN 2.  Maurice Greene became the first heavyweight to win fights in the LFA and UFC via submission. He accomplished this feat in his debut fight for both promotions at LFA 19 and the UFC – TUF 28 Finale. The Ultimate Fighter 28 semi-finalist remained perfect in the UFC this past weekend at UFC on ESPN+ 4. He defeated fellow LFA standout Jeff Hughes in a rematch of their LFA heavyweight title fight, which took place just ten months ago.