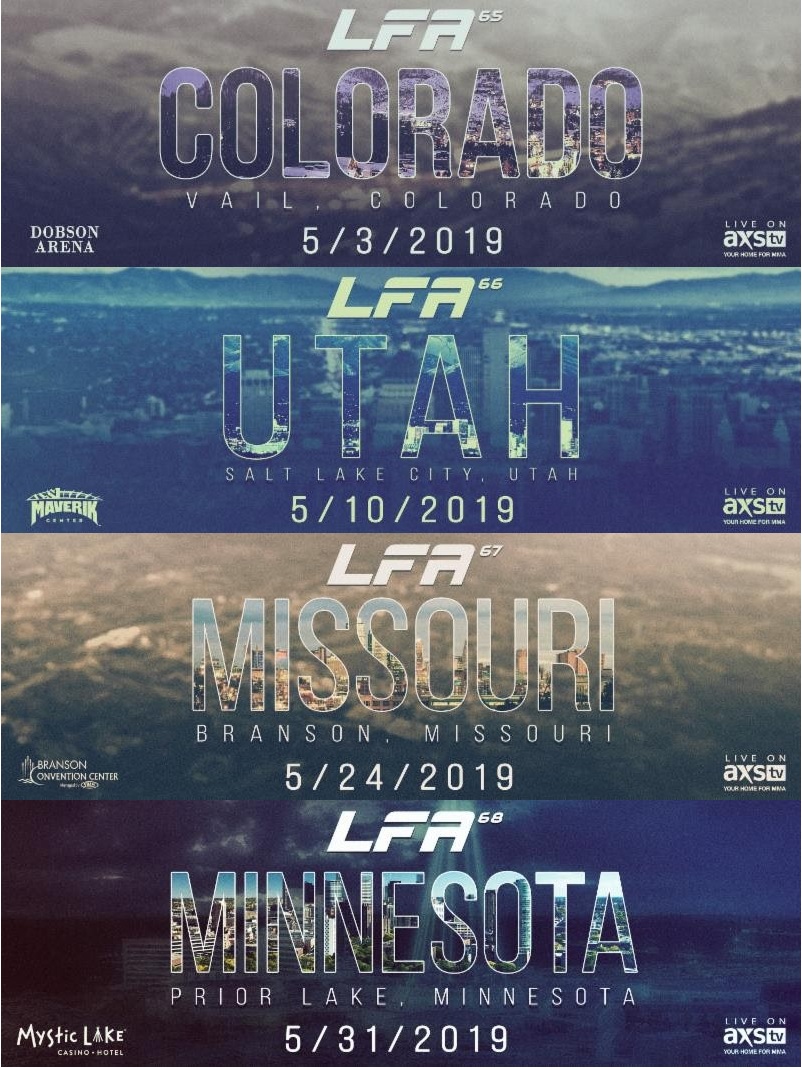 LAS VEGAS, Nevada – Legacy Fighting Alliance (LFA) CEO Ed Soares announced today that the promotion will have a busy month of May with four action-packed MMA events in Colorado, Utah, Missouri and Minnesota.

LFA 65 takes place Friday, May 3rd at the Dobson Arena in Vail, Colorado. In May of 2018 LFA made history by producing the first nationally televised MMA event from the world famous resort town. Vail has been the home to many world class sporting events including the Alpine World Championships, Freestyle World Championships and the Burton US Open. The LFA will continue that tradition when it returns on Friday May 3rd.

Tickets for LFA 65 will go on sale Wednesday, March 20th at 10:00 am MST and will be available at TicketsWest.com.

LFA 66 takes place Friday, May 10th at the Maverik Center in Salt Lake City, Utah. LFA 66 will be the first LFA event to take place in the state of Utah. The Maverik Center is the home of the ECHL’s Utah Grizzlies. The Maverik Center gained international acclaim and exposure as the host venue for the Ice Hockey Championships at the 2002 Olympic Winter Games. On May 10th, the LFA will bring the top prospects in the sport of MMA to the beehive state.

Tickets for LFA 66 will go on sale Friday, March 23rd at 10:00 am MST and will be available at SmithsTix.com.

LFA 67 takes place Friday, May 24th at the Branson Convention Center in Branson, Missouri. LFA 67 will be the third LFA event to take place in the “Show Me State”of Missouri. Resting at the heart of the $420 million Branson Landing development, the Branson Convention Center is a world-class meetings and events facility in one of our country’s most dynamic and entertaining destinations – Branson, Missouri.

LFA 68 takes place Friday, May 31st at the Mystic Lake Casino Hotel in Prior Lake, Minnesota. LFA 68 will be the tenth LFA event to take place in the “Land of 10,000 Lakes”. Minnesota’s largest casino is only 25 minutes from Mall of America with slots, blackjack, bingo, luxury hotel, entertainment, best of Twin Cities restaurants and bars, bus service, meetings and events. On Friday, May 31st the Mystic Lake Showroom will once again host the LFA Octagon continuing a long history of exciting MMA competition.

Tickets for LFA 68 will go on sale Wednesday, March 20th at 12 Noon CST and will be available at at MysticLake.com.