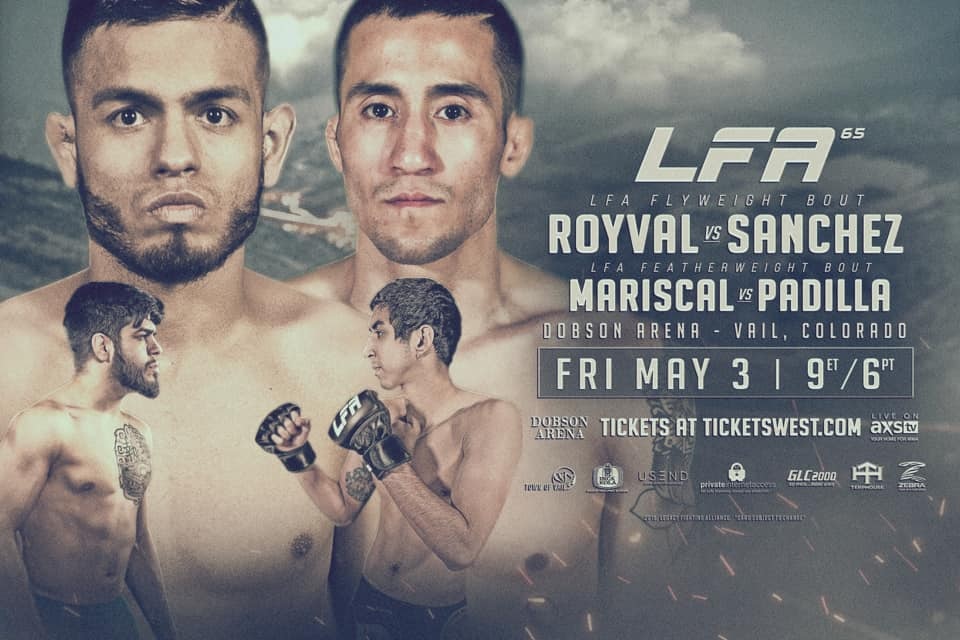 TICKETS on sale NOW through TicketsWest.com

LAS VEGAS, Nevada – LFA CEO Ed Soares announced today that the promotion will return to the resort town of Vail, Colorado to kick off Cinco de Mayo weekend. The main event of LFA 65 will feature a high-stakes flyweight showdown between two of the promotion’s biggest stars.

The main event of LFA 65 will feature a flyweight showdown between former LFA title challenger Brandon Royval and UFC veteran Joby Sanchez. LFA 65 – Royval vs. Sanchez takes place Friday, May 3rd at the Dobson Arena in Vail, Colorado. The entire main card will be televised live and nationwide on AXS TV at 9 p.m. ET / 6 p.m. PT.

“I am excited to bring LFA back to the beautiful resort town of Vail, Colorado,” stated Soares. “Brandon Royval and Joby Sanchez are two of our biggest stars and top contenders in our flyweight division. The winner will position himself nicely at the top of one of our most talented divisions. This will be a fantastic main event for our return trip to Vail on Cinco de Mayo weekend at LFA 65.”

Tickets for LFA 65 – Royval vs. Sanchez are available for purchase through TicketsWest.com.

Royval (8-4) is one of LFA’s most popular fighters for two very good reasons. The first being his action-packed fighting style and the second being his undeniable gameness. The Factory X Muay Thai product will headline an LFA event for a second straight time after seeing his star rise to new heights last fall. The 26-year-old Coloradan is a veteran of six fights in LFA, but his last two are the ones that put him on the map. When Royval’s teammate Sid Bice withdrew from the co-main event of LFA 48 in September, Royval stepped up on short notice to take on Charles Johnson, who is one of the most dominant forces in the division. Known as a submission machine, Royval utilized crisp striking to cruise to a Unanimous Decision victory. Two months later, Royval again answered the call on short notice, when LFA flyweight champion Maikel Perez withdrew from his title defense at LFA 53 with an injury. Royval would face Casey Kenney for the LFA interim flyweight title in a wildly entertaining five-round fight. Royval didn’t get the win, but he earned valuable experience. He will look to use that when he faces the biggest-name opponent of his career at LFA 65.

Sanchez (12-4) will enter the main event of LFA 65 fresh off a successful promotional debut in January. The win came against Demetrius Wilson in the co-main event of LFA 58 in his hometown of Albuquerque, New Mexico. Wilson is the same powerhouse flyweight prospect that Royval defeated via Triangle Choke at LFA 22. Sanchez utilized a different game plan, however, with most of the the fight playing out on the feet. The Jackson-Wink MMA product utilized superior footwork and his traditional martial arts background to dictate the fight on the feet en route to sweeping the judge’s scorecards with a Unanimous Decision verdict. Now the 27-year-old fireman looks to bring a firefight north of the New Mexico border, when he faces Colorado’s top flyweight in Royval. The border war on Cinco de Mayo will represent a contrast of story-lines. While Royval is looking to add a marquee win to a promising résumé, Sanchez is looking to add another successful chapter to an already impressive MMA career that includes two separate stints in the UFC, five overall fights for the industry leader, as well as two wins on Dana White’s Tuesday Night Contender Series.

LFA 65 will be the second LFA event to take place in the Colorado resort town of Vail. It will also be the sixth time that LFA has traveled to the state of Colorado. RFA visited “The Centennial State” eight times before the merger. The entire main card of LFA 65 will be televised live and nationwide on AXS TV at 9 p.m. ET / 6 p.m. PT.

About the TOWN OF VAIL:
Since its incorporation in 1966, Vail has earned the distinction as one of the leading mountain resort communities in North America. With more open space than any other community of its kind, free transit and other environmentally-sensitive services, plus an abundance of recreational, cultural and educational opportunities, Vail has become not only a great place to visit, but an even better place to live. Please visit their website at www.vailgov.com for more information.