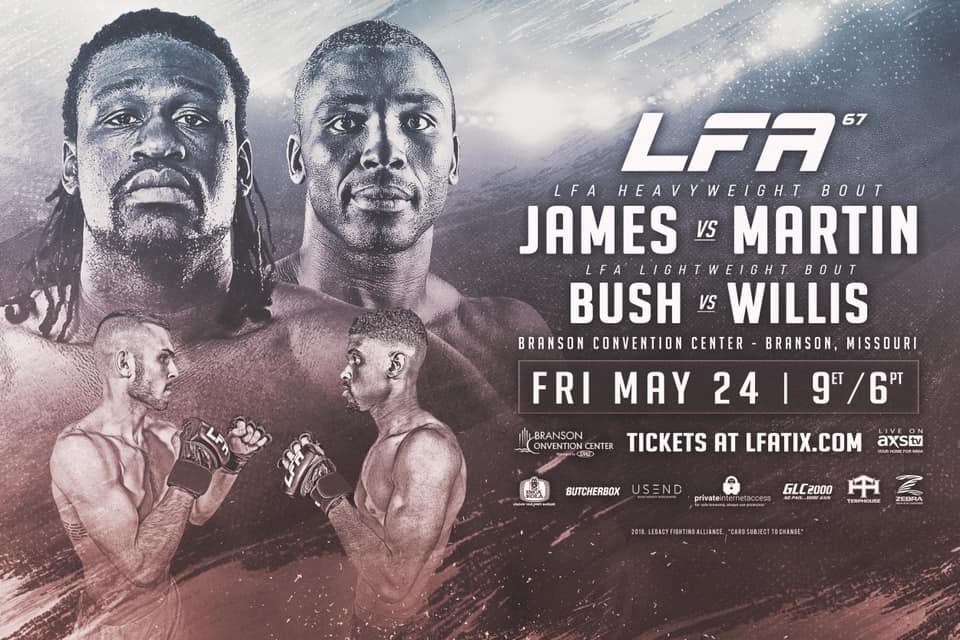 TICKETS on sale NOW through LFAtix.com

LAS VEGAS, Nevada – CEO Ed Soares announced today that the promotion will feature a heavyweight showdown at the top of LFA 67 when the promotion kicks off Memorial Day weekend in The Ozarks.

“We are excited to kick off Memorial Day weekend in Missouri,” stated Soares. “RFA hosted four shows across the state and this will be our third trip to the Show Me State as LFA. Missouri has some of the best fight fans in the country. Daniel James put the division on notice with a big knockout win at LFA 50. Patrick Martin made a similar statement with a quick knockout win at LFA 60. Both men have the ability to end a fight with one punch. This will be a memorable main event at LFA 67.”

Tickets for LFA 67 – James vs. Martin are available for purchase NOW through LFAtix.com.

James (8-3-1) put the LFA heavyweight division on notice in his promotional debut this past September at LFA 50. “The Predator” faced NCAA Division I wrestler turned undefeated MMA prospect Calyn Hull that night and stopped the former Wisconsin Badger with an onslaught of punches just 32-seconds into the second stanza. The win surprised many MMA scouts that were high on Hull, but it also confirmed what many hardcore MMA fans have known for years. That is the fact that the former celebrity bodyguard is a stylistic nightmare for anyone. Knockout power in both hands with a strong Judo base has made the 6’5″, 265-pound behemoth a toughmatchup for anyone during his 5-year MMA career.

Martin (7-4) is perhaps the one man in the division that is equipped to match James in both size and skill set. Standing 6’6″ and also tipping the scales at the division weight limit of 265-pounds, the former college basketball player possesses the same impressive measurables as his Chicago based counterpart. Hailing from the state capital of Iowa, the Des Moines native quickly gave his hometown crowd something to cheer about in February. Like James, Martin also faced an undefeated prospect, but he needed only 31-seconds to dispatch Byron Stevens via TKO at LFA 60. The dangerous southpaw started MMA four years ago, so he like his opponent at LFA 67, he is young in his MMA career.

The co-main event of LFA 67 could determine the next top contender in the talent-laden LFA lightweight division. Dynamic Missourian prospect Dakota “Hairy” Bush (6-1) will look to defend his home state’s turf against fellow top prospect and two-time LFA headliner Jaleel “The Realest” Willis (9-2). Both men have picked up big wins at the Branson Convention Center and will be looking for similar success in their return trip to The Ozarks. The 24-year-old Bush will be making his fifth appearance for LFA. The St. Clair native began that successful run with a submission win over Jose Martinez in Branson at LFA 21. Meanwhile, the 27-year-old Willis will be making his fourth appearance for the promotion. He also picked up his first LFA win in Branson. That win came last summer in the co-headliner of LFA 42. The Memphis native stopped Chel Erwin-Davis with a big right knee and punches just 70 seconds into their bout.

LFA 67 will be the third LFA event to take place in the state of Missouri. RFA visited the “Show Me State” four times before the merger. Further information about LFA 67 will be announced soon. The entire main card of LFA 67 will be televised live and nationwide on AXS TV at 9 p.m. ET / 6 p.m. PT.

About the BRANSON CONVENTION CENTER:
Managed by SMG Management, the Branson Convention Center is a world-class meetings and events facility in one of our country’s most dynamic and entertaining destinations – Branson, Missouri. Resting at the heart of the $420 million Branson Landing development is a meeting planner, exhibitor and attendee’s dream. The Branson Convention Center is a high-tech architectural gem offering an exceptional 220,000 square feet of usable space, including one exhibit hall totaling 47,125 square feet attached to a 22,703 square foot ballroom. Meeting space also includes 14 flexible breakout rooms all within proximity to the ballroom and exhibit hall. Take advantage today and get the flexibility you need with every possibility for your next conference, banquet, wedding or special event. Please visit their website at www.bransoncc.com for more information.