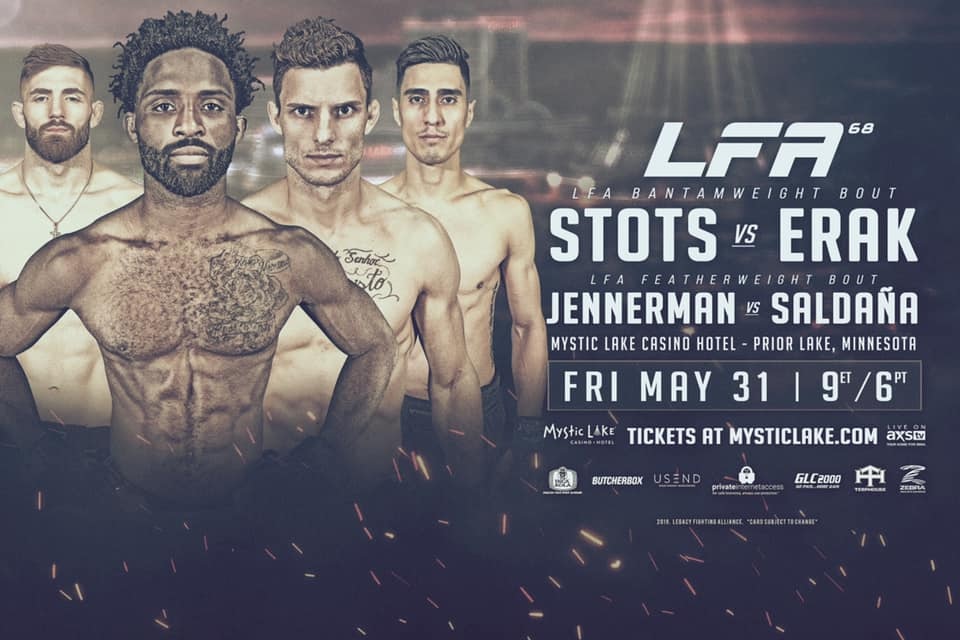 LAS VEGAS, Nevada – LFA CEO Ed Soares announced today that the promotion will conclude a busy month of May in Minnesota with a high-stakes bantamweight battle at the top of LFA 68. The event will wrap up an action-packed May schedule for LFA that includes four events across four states.

“I am excited to return to Minnesota with one of the best bantamweight match-ups of the year,” stated Soares. Raufeon Stots and Gustavo Erak have both headlined LFA events. They have also proven to be two of the most exciting prospects in one of the deepest divisions in the world. Mystic Lake is a fantastic venue and regular destination for LFA. Stots vs. Erak will give our loyal fight fans in the Upper Midwest a main event that they deserve at LFA 68.”

Tickets for LFA 68 – Stots vs. Erak are available for purchase NOW at MysticLake.com.

Stots (11-1) will return to the LFA Octagon after proving to be one of the promotion’s top acquisitions in 2018. In September, the two-time NCAA Division II national champion wrestler made his LFA debut in his college town of Kearney, Nebraska in the main event of LFA 48. The University of Nebraska-Kearney (UNK) wrestling legend gave his Nebraska fans a happy homecoming with a highlight reel TKO stoppage of Ryan Lilley. Stots returned two months later in his home state of Texas with another impressive performance. This time he defeated longtime LFA standout Levi Mowles at LFA 55. Now the 30-year-old will look to pick up a third LFA win in the main event of LFA 68. In doing so, Stots hopes to take another step in the same direction as fellow Loper wrestling and LFA great Kamaru Usman, who became a UFC champion last month.

Erak (21-4-1) made his long-awaited international and LFA debut just three weeks after Stots made his promotional debut this past September. Erak, like Stots, also made his promotional debut for LFA in the main event slot. The 26-year-old Brazilian dynamo headlined LFA 51 on the strength of a dominant 8-fight win streak in his native Brazil. The Muay Thai stylist and Aspera FC bantamweight champion returned to the talent-rich Brazilian fight scene to start 2019. It was there that he picked up a pair of dominant wins for the newly minted Future FC promotion. In January, Erak needed less than a round to dispatch Diego Santos via TKO in the co-main event of Future FC 1. The Brazilian knockout artist returned two months later in the main event of Future FC 3. This time he earned a Unanimous Decision over Wanderlei Junior.

LFA 68 will be the eleventh LFA event to take place in the state of Minnesota. RFA and Legacy FC hosted a combined nine events in the “Land of 10,000 Lakes” before the merger. Six of those events took place under the RFA banner inside the Mystic Lake Casino Hotel. The entire main card of LFA 56 will be televised live and nationwide on AXS TV at 9 p.m. ET / 6 p.m. PT.