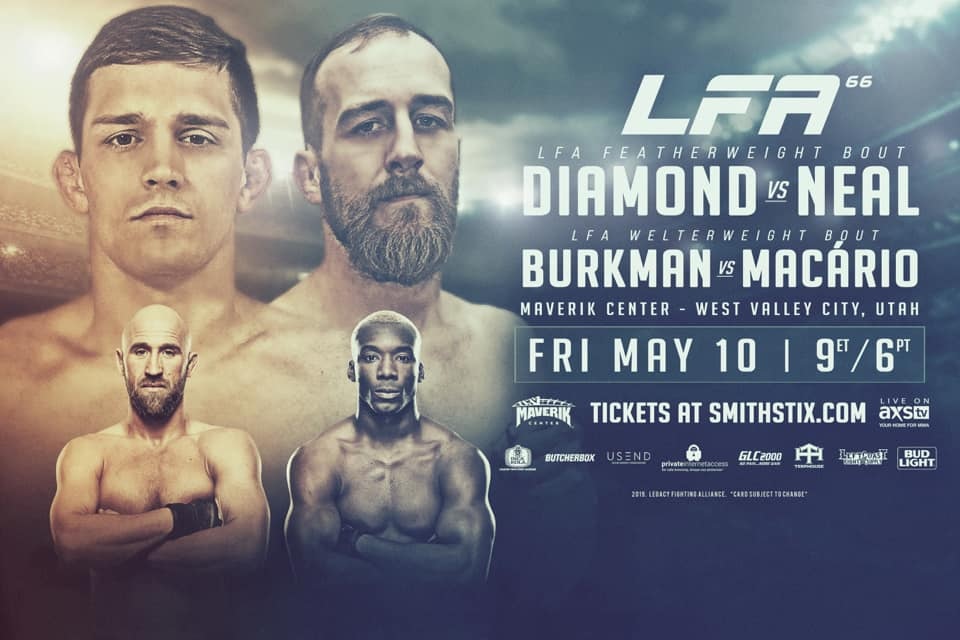 LAS VEGAS, Nevada – LFA CEO Ed Soares announced earlier this month that the promotion will make its first trip to Utah in May. He has now announced that a high-profile fight between two popular UFC veterans will serve as the penultimate bout of LFA 66.

“I am excited to announce that Utah MMA pioneer and longtime UFC star Josh Burkman will return to action in the co-main event of LFA 66,” stated Soares. “Burkman made his pro debut in Utah over 16 years ago and has gone on to become one of the most successful and respected fighters in the state’s impressive combat sports history. He will face fellow UFC veteran William “Patolino” Macário in the co-main event of LFA 66, which will be the first LFA event in the state of Utah.”

Tickets for LFA 66 – Diamond vs. Neal are available for purchase through SmithsTix.com.

Burkman (28-17) is one of the longest tenured fighters in UFC welterweight history. 19 of his 45 career bouts have come inside the famed UFC Octagon and that is not including his win over Melvin Guillard on the second season of the UFC’s hit reality television show The Ultimate Fighter. Burkman will now return to his hometown on Friday, May 10th in the co-main event of LFA 66. This will be his first fight in his home state of Utah in nearly 7 years and his first fight in his hometown Salt Lake City area in more than 14 years. The man known as “The People’s Warrior” made his pro MMA debut all the way back in 2003 and is widely considered one of the most influential fighters in Utah’s long and storied MMA history.

The previously announced main event of LFA 66 will feature a high-stakes featherweight showdown when UFC veteran Tyler Diamond (9-1) squares off with top undefeated prospect Jon Neal (10-0). Diamond made his UFC debut last summer after reaching the semi-finals on the twenty-seventh season of The Ultimate Fighter. The Team Alpha Male standout will meet Utah’s top prospect in the marquee bout of LFA 66. Neal holds a flawless 10-0 record in MMA after competing against the top competition in his home state for more than a decade. The One Hit MMA product is a decorated multi-division champion who is eager to showcase his skills in front of a nationally televised audience for the first time.