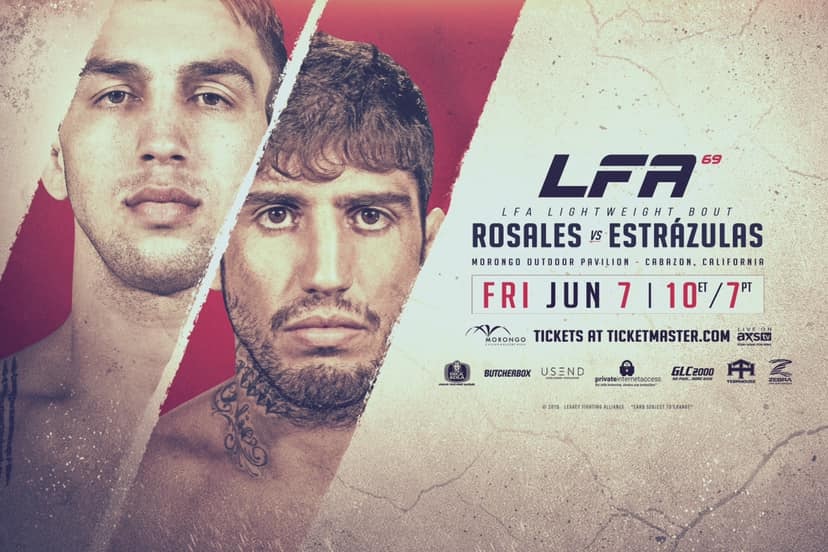 LAS VEGAS, Nevada – LFA CEO Ed Soares announced today that the promotion will kick off a busy summer schedule in southern California with a heated lightweight rivalry at the top of LFA 69.

“I am excited to bring LFA back to Coachella Valley at LFA 69”, stated Soares. “This will be our seventh show in my home state of California. Morongo Casino, Resort & Spa is a world-class 4-diamond establishment and we look forward to returning in June with a heated rivalry in the main event between Jacob Rosales and Arthur Estrázulas.”

Tickets for LFA 69 – Rosales vs. Estrázulas are available for purchase NOW at Ticketmaster.com.

Rosales (10-4) will return to the LFA Octagon after displaying the elite talent that many in southern California have come to expect from him. MMA scouts have been tracking his every move since his amateur MMA debut in 2013. That fight came two months after his 18th birthday and “Lil’ Badger” would quickly decimate the amateur MMA scene in his home state. The Orange County native’s amateur reign lasted only 15 months, but he quickly made his mark compiling an 8-0 record. The 23-year-old has since gone on to earn a perfect 3-0 record in Bellator and also engaged in one of the most memorable RFA fights of 2015. However, it was his LFA debut this past November that officially announced his arrival as a surefire can’t miss prospect at 155-pounds. The Ben “The Badger” Jones protégé needed less than 2 minutes to dismantle top Brazilian prospect Ricardo “Sasquatch” Seixas with punches at LFA 54 and looks to make another big statement at LFA 69.

Estrázulas (10-4) is a decorated BJJ black belt and GLORY kickboxing veteran. He also headlined RFA 42 and is one of the most trusted cornermen at the world-renowned Kings MMA gym in Huntington Beach. In fact, he was in the corner of his roommate, teammate, and friend Ricardo “Sasquatch” Seixas when he fought Rosales in November at LFA 54. That night, Rosales battered the BJJ black belt Seixas with punches. His power and precision was off the charts and the referee had to step in at the 1:56 mark of the first round. Estrázulas witnessed the onslaught firsthand. The 29-year-old is fully aware of the skills that Rosales possesses. However, not all BJJ black belts are created the same way. Estrázulas knows this. He has competed successfully as a GLORY kickboxer and feels he has the stand-up to deal with Rosales. The proud Brazilian is now looking to avenge his friend’s loss against his fellow Orange County based rival in the main event of LFA 69.

LFA 69 will be the seventh LFA event to take place in the state of California. RFA hosted eight events inside “The Golden State” before the merger. Further information will be announced soon. The entire main card of LFA 69 will be televised live and nationwide on AXS TV at 10 p.m. ET / 7 p.m. PT.