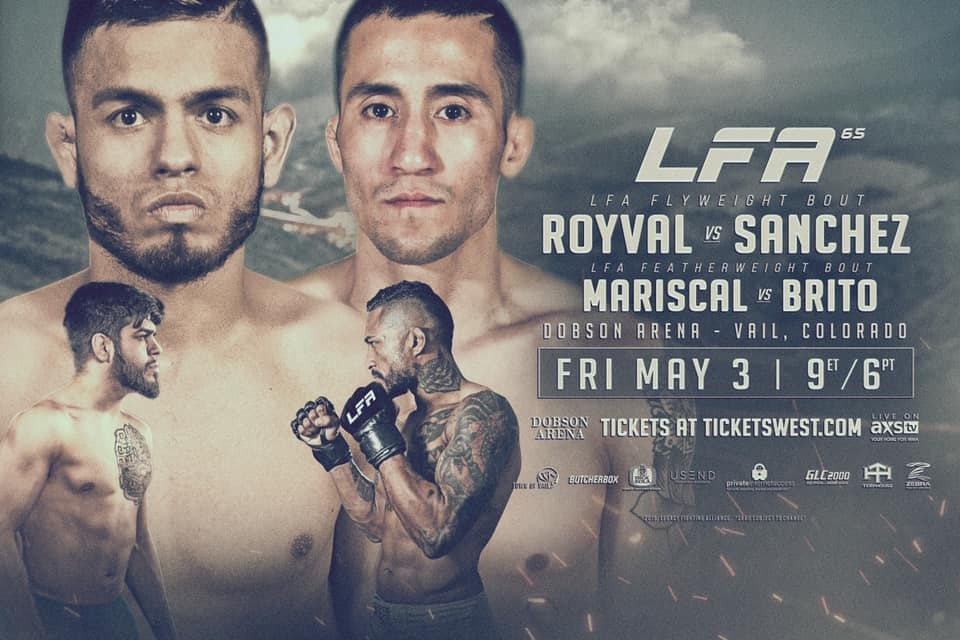 TICKETS on sale NOW through TicketsWest.com

LAS VEGAS, Nevada — LFA CEO Ed Soares announced earlier this month that the promotion will return to the resort town of Vail, Colorado to kick off Cinco de Mayo weekend.

LFA 65 – Royval vs. Sanchez takes place this Friday, May 3rd at the Dobson Arena in Vail, Colorado. The entire main card will be televised live and nationwide on AXS TV at 9 p.m. ET / 6 p.m. PT.

“We are excited to bring LFA back to the beautiful resort town of Vail, Colorado,” stated Soares. “Brandon Royval and Joby Sanchez are two of our biggest stars, while Jose “Chepe” Marsical and Joanderson “Tubarão” Brito are two of the top featherweight prospects in the sport. We are bringing a stacked card to Vail on Cinco de Mayo weekend at LFA 65.”

Tickets for LFA 65 – Royval vs. Sanchez are available for purchase through TicketsWest.com.

Mariscal (9-3) is the Mexican-American powerhouse that won the first LFA headliner of 2019. The 26-year-old prospect, known as “Chepe”, has compiled a combat sports résumé that makes most heads turn. IMMAF world champion, IMMAF national champion, 18-1 amateur MMA record with 17 finishes, two-time regional MMA champion as a professional fighter, nine-time BJJ champion, three-time kickboxing champion, NJCAA national qualifier in wrestling, and Judo black belt. These achievements led Mariscal to the defining moment in his career at LFA 57, when he became the first man to defeat the highly-touted Youssef Zalal. The Elevation Fight Team product is now eager to return to the LFA Octagon. This time he will face one of Brazil’s top prospects at LFA 65.

Brito (10-2-1) is one of the top prospects to hail from Brazil, the birthplace of MMA. The Santa Helena, Maranhão native has positioned himself as one of the top prospects in his country by winning multiple championships within his continent. In 2017, the 24-year-old prospect, known as “Tubarão”, won the Araça Fight featherweight title in Brazil. Last summer, he would win the Fusion FC lightweight title in Peru. Brito continued his winning ways this past February in the co-main event of Future FC 2. He did so by becoming the first person to defeat the highly-touted Estabili Amato. Brito submitted Amato with a beautiful Guillotine Choke, which earned him a contract with LFA. Now the Brazilian dynamo is eager to make his long-awaited debut outside of South America at LFA 65.

LFA 65 will be the second LFA event to take place in the Colorado resort town of Vail. It will also be the sixth time that LFA has traveled to the state of Colorado. RFA visited “The Centennial State” eight times before the merger. The entire main card of LFA 65 will be televised live and nationwide on AXS TV at 9 p.m. ET / 6 p.m. PT.