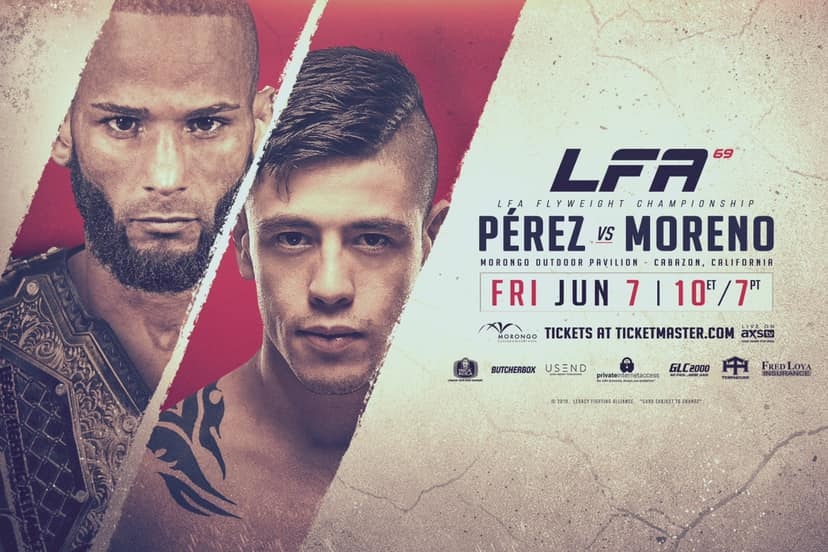 LAS VEGAS, Nevada – LFA CEO Ed Soares announced today that the promotion will kick off a busy summer schedule in southern California with a flyweight title fight at the top of LFA 69. The addition of the title fight came after previously announced headliner Jacob Rosales accepted an invitation to compete on Dana White’s Tuesday Night Contender Series.

The main event of LFA 69 will feature the first title defense of LFA flyweight champion Maikel Pérez. He is set to defend his title against UFC veteran Brandon Moreno. LFA 69 – Pérez vs. Moreno takes place Friday, June 7th at the Morongo Outdoor Pavilion at the Morongo Casino, Resort & Spa in Cabazon, California. The entire main card will be televised live and nationwide on AXS TV at 10 p.m. ET / 7 p.m. PT.

“I am excited to bring LFA back to Coachella Valley at LFA 69”, stated Soares. “This will be our seventh show in my home state of California. Morongo Casino, Resort & Spa is a world-class 4-diamond establishment and we look forward to returning on June 7th with our flyweight championship on the line. Maikel Pérez wil defend his title against UFC veteran Brandon Moreno in the main event of LFA 69.”

Tickets for LFA 69 – Pérez vs. Moreno are available for purchase NOW at Ticketmaster.com.

Pérez (6-1) is the reigning LFA flyweight champion. He is also a former Olympian and Cuban national wrestling team member. The 35-year-old began competing on Cuba’s national team at international tournaments when he was 17-years-old. This included competing at the 2008 Summer Olympics in Beijing, China. “Super Maikel” also represented Cuba at the 2009 World Championships and the 2006 and 2009 Pan American Championships. He took the gold medal at 60 kg at the 2009 Pan American Championships. Pérez entered MMA to much fanfare in 2016 and captured his first world title in MMA in April 2018. He did this by stopping fellow top prospect Sid Bice via TKO in the second round of their headlining bout at LFA 37. Pérez was set to defend his title against Casey Kenney at LFA 53 in November, but sustained an injury a week before his first scheduled title defense. The proud Cuban champion is now fully healed and ready to defend his title for the first time on June 7th. Unbeaten at flyweight, Pérez is also looking to pick up his fifth straight win at LFA 69.

Moreno (14-5) will be challenging for the LFA flyweight championship on the strength of an impressive showing in the UFC in his five most recent bouts. The 25-year-old Mexico native began his UFC career just one month after debuting on the twenty-fourth season of the UFC’s hit reality television show The Ultimate Fighter. The man known as “The Assassin Baby” made his debut on short notice against the highly-touted Louis Smolka and submitted the red-hot Hawaiian in less than one round. Moreno would then win his next two UFC bouts against a pair of former Legacy FC and RFA fighters in Ryan Benoit and Dustin Ortiz. He would see his run in the UFC come to an end after coming up short against former RFA flyweight champions Sergio Pettis and Alexandre Pantoja, but is now looking to regroup by becoming the next LFA flyweight champion at LFA 69. In doing so, Moreno hopes to echo the classic Juan Manuel Marquez vs. Joel Casamayor boxing superfight from over a decade ago, where the Mexican challenger walked away with Cuban Olympian’s title.

LFA 69 will be the seventh LFA event to take place in the state of California. RFA hosted eight events inside “The Golden State” before the merger. Further information will be announced soon. The entire main card of LFA 69 will be televised live and nationwide on AXS TV at 10 p.m. ET / 7 p.m. PT.