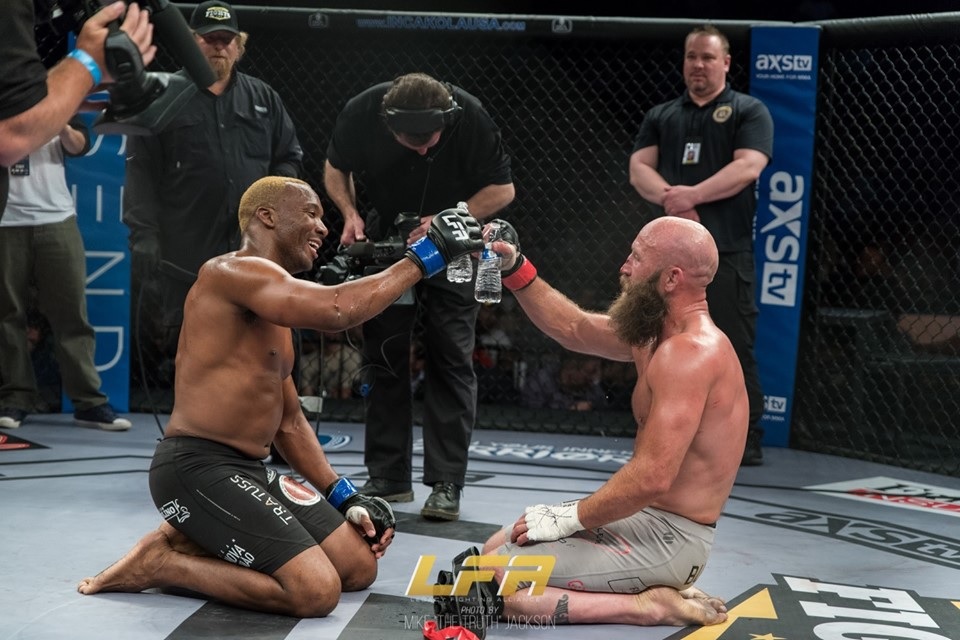 LFA 66 features ‘Fight of the Year’ candidate, retirement of an MMA pioneer, and rare Gogoplata

LAS VEGAS, Nevada — Legacy Fighting Alliance (LFA) visited Utah for the first time on Friday night and the event was a big success. LFA 66 was highlighted by a ‘Fight of the Year’ candidate, the retirement of an MMA pioneer, and a rare Gogoplata submission.

“We had a great night of fights in Utah on Friday night at LFA 66,” stated LFA CEO Ed Soares. “The main event between Tyler Diamond and Jon Neal was one of the best fights of the year, Utah MMA pioneer Josh Burkman retired in our Octagon, and Andrew Tenneson pulled off the first gogoplata in LFA history. The following night, we had three former champions win their fights at UFC 237.”

The main event of LFA 66 saw an early contender for ‘Fight of the Year’. Tyler Diamond (10-1 in MMA, 1-0 in LFA) and Jon Neal (10-1 in MMA, 0-1 in LFA) were both making their promotional debut for LFA with high expectations. Diamond was a semi-finalist on TUF 27 with his only loss coming in the UFC via Majority Decision. Jon Neal was undefeated during a career that stretches well over a decade.

The prized featherweight prospects threw everything they had at each other. They traded left hooks that knocked each other down, Diamond scored takedowns, Neal countered takedowns with elbows, Diamond pressed more of the action, and both showed true grit by fighting out of submission attempts and ground and pound that would have left most unconscious. In the end, Diamond got the decision win, but they both saw their stock rise.

In the co-main event of LFA 66, Utah MMA pioneer and longtime UFC veteran Josh Burkman (28-18 in MMA, 0-1 in LFA) and fellow UFC veteran William “Patolino” Macário (10-4 in MMA, 1-1 in LFA) had a back-and-forth war. In the end, the judges awarded the Brazilian a Split Decision victory. “The People’s Warrior” laid his gloves down in the center of the Octagon, before the scores were read, signifying the end to his great MMA career.

Andrew Tenneson (8-1 in MMA, 3-0 in LFA) entered the night atop the AXS TV Fights featherweight rankings and used the featured bout at LFA 66 to remind people why. The creative New Mexican burst on to the scene at RFA 34 with an all-out war with current UFC star Cory Sandhagen. That bout remains Tenneson’s lone loss, but he used a wide array of unorthodox attacks that instantly made him a fan favorite.

Tenneson used Capoeira kicks, leg locks, and a Gogoplata attempt against Sandhagen. While they did not secure him the win, they were instilled in the memories of fight fans. Tenneson’s next four fights were by the book and resulted in victories, but everyone knew what he was capable of. That moment of brilliance came in the form of a Gogoplata submission of Westin Wilson (7-4 in MMA, 0-2 in LFA). It was the first Gogoplata in LFA history.

LFA returns Friday, May 24th with LFA 67 – James vs. Martin. The main event will feature a heavyweight bout between hulking one-punch knockout artists Daniel James and Patrick Martin. The event will take place at the Branson Convention Center in Branson, Missouri. The main card will be televised live and nationwide on AXS TV at 9 p.m. ET / 6 p.m. PT.