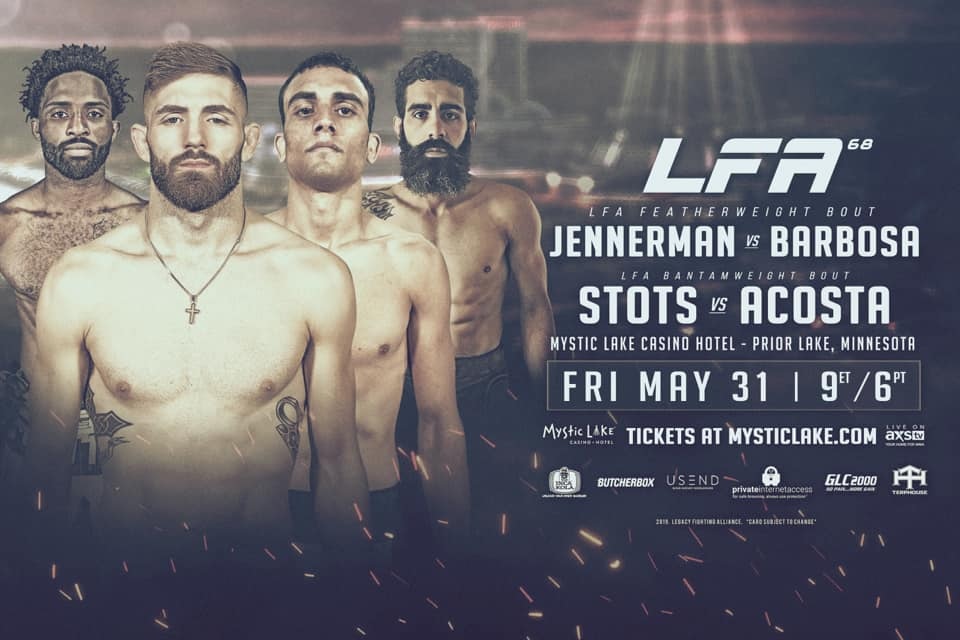 LAS VEGAS, Nevada – LFA CEO Ed Soares announced today that there has been a change at the top of LFA 68 in Minnesota. Originally announced headliner Gustavo Erak and co-headliner Luis Saldaña have both withdrawn with injuries. Their opponents Raufeon Stots and Nate Jennerman will remain on the card against top opposition.

“I am excited to return to the Upper Midwest with another exciting show in Minnesota,” stated Soares. “Nate Jennerman and Rafael Barbosa are two of our top featherweights. They are also two of the most exciting prospects in one of the deepest divisions in the sport. Mystic Lake is a fantastic venue and regular destination for LFA. Jennerman and Barbosa will give the fight fans of Minnesota an outstanding main event at LFA 68.”

Tickets for LFA 68 – Jennerman vs. Barbosa are available for purchase NOW at MysticLake.com.

Jennerman (13-4) is one of the most experienced and successful fighters in LFA history. The Roufusport product is currently tied with Bobby Lee and Austin Lingo for second most wins in LFA history (5 wins) and will look to tie the promotion’s wins leader Damon Jackson with a win at LFA 68. If Jennerman wins by submission, he will also tie Jackson’s record for most submission wins in LFA history (5 submission wins). Jennerman has submitted Damion Hill, Sam Toomer, John DeVall, and Kevin Croom inside the LFA Octagon. Most recently, “Nasty Nate” picked up a key decision win over 22-year-old prospect Ken Beverly in February in the co-main event of LFA 61. Now the 26-year-old will look to secure his first main event victory in LFA against one of the sport’s top prospects at LFA 68.

Barbosa (11-1) is one of the most exciting prospects to come out of Brazil this year. The man known as “Coxinha” is a protégé of former UFC champion Lyoto Machida and RFA great Chinzô Machida. The karate black belt won his LFA debut in March with UFC President Dana White sitting cageside. Barbosa’s win over Cameron Graves at LFA 63 was featured on the season premiere of Dana White: Lookin’ for a Fight, which debuted this past Friday. In fact, White had some encouraging words about Barbosa on the show before the fight even took place, “Barbosa is 10-1…he’s 21-years-old though. This kid has so much more time to learn and grow.” Now the talented karateka looks to make good on White’s inspiring words by continuing that growth in his first LFA headliner at LFA 68.

The co-main event of LFA 68 will feature an explosive bantamweight showdown when two-time NCAA Division II national champion wrestler Raufeon “Supa” Stots (11-1) faces NCAA Division II All-American wrestler Ralph “The Spyder Money” Acosta (18-13). Stots returns to the LFA Octagon after proving to be one of the promotion’s top acquisitions in 2018. He picked up a TKO win over Ryan Lilley in the main event of LFA 48 and a decision win over Levi Mowles at LFA 55. After defeating a striker (Lilley) and a BJJ black belt (Mowles), Stots will now face a man with a similar skill set at LFA 68.

That man will be Acosta, who jumped at the opportunity to face Stots. Acosta wrestled three hours south of the venue for LFA 68 and earned NCAA Division II All-American status at Upper Iowa University. Also like Stots, he holds a key win over Lilley, courtesy of a Rear Naked Choke. In fact, Acosta has won five of his last seven fights dating back to 2016. The only two men that have beat him in that time are RFA great Alex Perez and LFA great Bruno Silva, who are both currently fighting in the UFC. Now the former UIU Peacock has his sights set on the former UNK Loper in the co-main event of LFA 68.