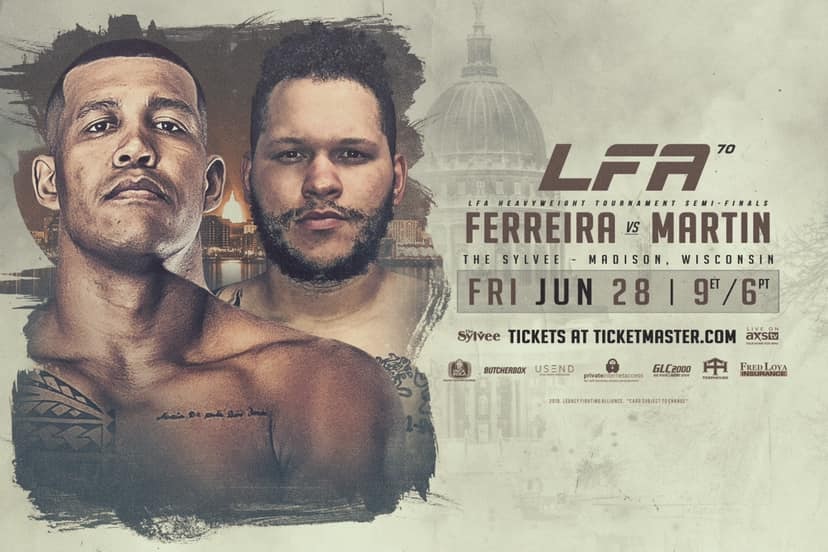 TICKETS on sale NOW through Ticketmaster.com

LAS VEGAS, Nevada – LFA CEO Ed Soares announced today that the promotion will make its first trip to Wisconsin in June. The LFA 70 headliner will feature the second semi-final bout in the LFA heavyweight tournament. The winner will advance to face Daniel James for the LFA heavyweight title later this year.

“I am excited to bring LFA to Wisconsin for the first time this summer,” stated Soares. “Daniel James defeated Patrick Martin at LFA 67 in the first half of the LFA four-man heavyweight tournament. The winner between Renan Ferreira and Brett Martin at LFA 70 will face James for the vacant LFA heavyweight title later this year.”

Tickets for LFA 70 – Ferreira vs. Martin are available NOW at Ticketmaster.com.

Ferreira (5-1) is an impressive force of nature. Standing 6 feet, 10 inches tall with an athletic 250-pound physique, the man known as “Problema” has one of the most accurate nicknames in combat sports. The Brazilian behemoth possesses physical gifts that create problems for everyone he faces. The 29-year-old, who boasts the frame of an NBA all-star, has also been busy learning the ways of combat under the watchful eye of UFC Hall of Fame member Antonio Rodrigo “Minotauro” Nogueira at Team Nogueira in Rio de Janeiro, Brazil. Ferreira was signed to LFA after an impressive performance at Future FC 3 in March. “Problema” stopped Fabricio Almeida with punches after taking his back in the second round of the bout.

Martin (7-1) is widely-regarded as one of the top heavyweight prospects in North America. The man known as “Big Dog” proved to be just that long before he crossed over to MMA. The 25-year-old was an alpha dog on the wrestling mats in his native Michigan as well. Martin went undefeated his senior year at powerhouse Hesperia High School en route to becoming the 2012 heavyweight state champion. He then earned All-American honors at Muskegon Community College. More recently, Martin has won multiple heavyweight MMA titles, which includes a 68-second submission win over previously top-ranked AXS TV Fights heavyweight, LFA star, Contender Series standout, and TUF 28 alum Josh Parisian.

LFA 70 will be the first LFA event to take place in the state of Wisconsin. RFA hosted one event in the “Badger State” before the merger. The entire main card of LFA 70 will be televised live and nationwide on AXS TV at 9 p.m. ET / 6 p.m. PT.