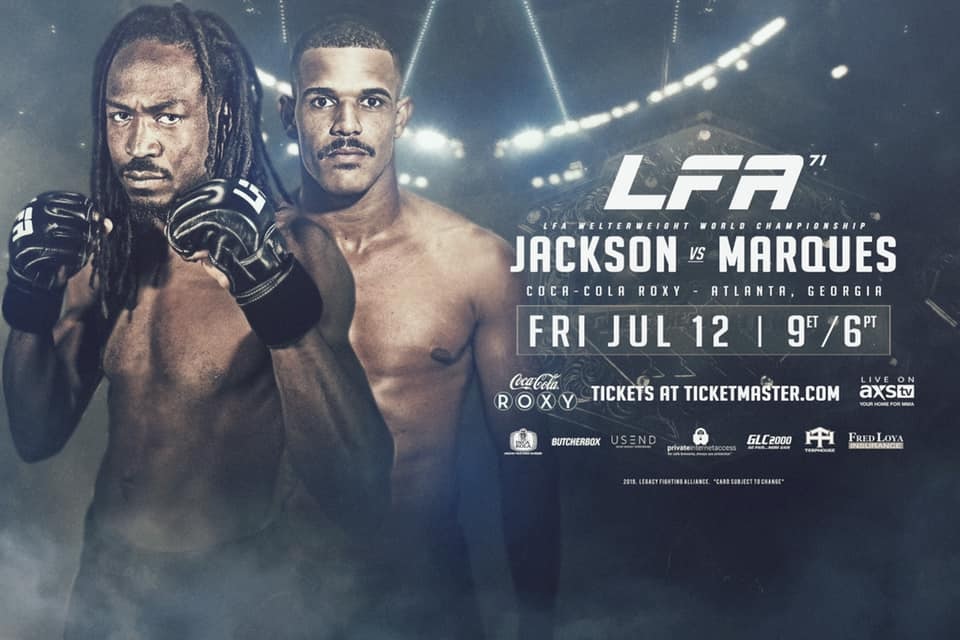 “I am excited to bring the LFA welterweight championship to Atlanta,” Soares exclaimed. “This will be our first trip to Georgia under the LFA banner and we will be crowning a new welterweight champion on July 12th. Jason Jackson and Junior Marques will give our southern fight fans a fantastic title fight at LFA 71.”

Jackson (9-3) is the top MMA prospect to hail from the Caribbean island nation of Jamaica. The 28-year-old Hard Knocks 365 standout has been considered one of the top welterweight prospects in the sport for the last four years. In that time, Jackson has competed on the UFC’s hit reality show The Ultimate Fighter 21, won multiple regional titles, and competed on the first season of Dana White’s Tuesday Night Contender Series. An ankle injury prevented Jackson from showing White his full potential that night, but he quickly rebounded with a pair of wins. The first came via TKO over Jordon Larson at Bellator 204. The second came via Arm-Triangle Choke against Scott Futrell in the co-main event of LFA 64. Now the man known as “The Ass-Kicking Machine” looks to capture LFA gold at LFA 71.

Marques (9-1) is the top welterweight prospect in Brazil, the birthplace of modern day MMA. The 25-year-old Imperio Fight Team (IFTeam) product has taken his country’s talent-rich MMA scene by storm since making his professional debut just before Christmas in 2014. The Brazilian wunderkind has won titles in both MMA and Muay Thai in that time. Marques possesses a similar skill set and fighting style as his teammate Johnny Walker, who has taken the UFC light-heavyweight division by storm since making his UFC debut last fall. This has facilitated Marques’ devastating run in MMA, where he has an 89% finishing rate in the nine fights he has won. Now he is looking to pick up his first world title. The man known as “Juninho” will get that opportunity in his international debut at LFA 71.

LFA 71 will be the first LFA event to take place in the state of Georgia. Legacy FC hosted three events in the “Peach State” before the merger. The entire main card of LFA 71 will be televised live and nationwide on AXS TV at 9 p.m. ET / 6 p.m. PT.

About the Coca-Cola Roxy:
The Coca-Cola Roxy, Atlanta’s brand new concert venue, opened in April of 2017. The 3,600 capacity venue is located in The Battery Atlanta, a mixed-use development next to SunTrust Park, home of The Atlanta Braves. The 53,000 square foot site has state of the art sound, lights and production capabilities for live music, corporate meetings and private events. Coca-Cola Roxy hosts approximately 40 shows per year and presents a diverse range of local, national and international artists and bands. Please visit their website at www.cocacolaroxy.com for more information.