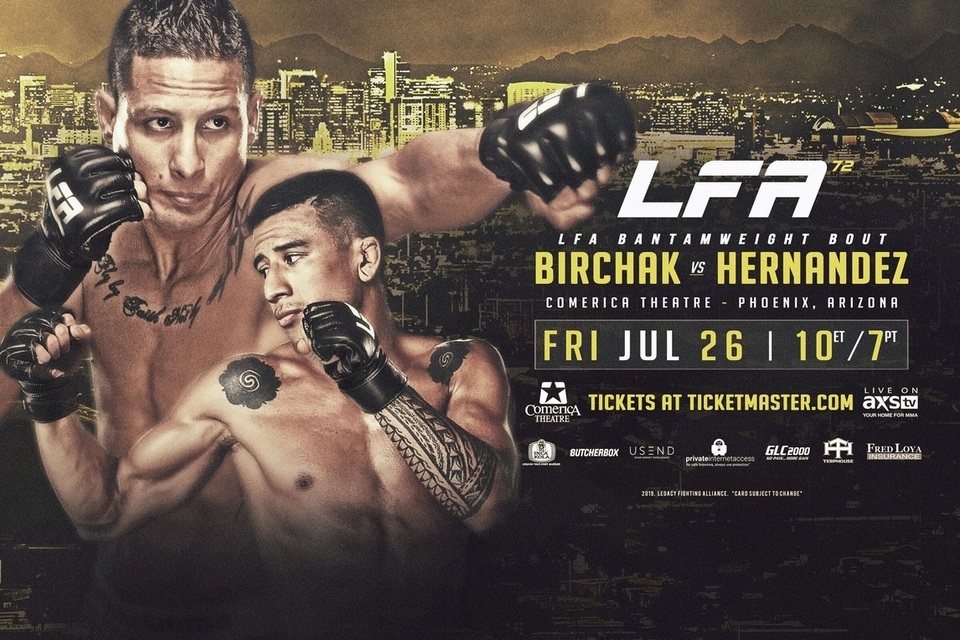 Tickets are on sale NOW at Ticketmaster.com

LAS VEGAS, Nevada – LFA CEO Ed Soares announced today that the promotion will return to the Valley of the Sun in July. The main event of LFA 72 will feature a showdown between two of the LFA bantamweight division’s top contenders.

The main event of LFA 72 will bring a high-stakes showdown to the state capital of Arizona. The headliner will see UFC veteran and Arizona’s own Anthony “El Toro” Birchak face top prospect Nohelin “Suave” Hernandez in a pivotal bantamweight bout. LFA 72 – Birchak vs. Hernandez takes place Friday, July 26th at the Comerica Theatre in Phoenix, Arizona. The main card will be televised live and nationwide on AXS TV at 10 p.m. ET / 7 p.m. PT.

“LFA is returning to Arizona in July with a fantastic main event,” stated Soares. “Anthony Birchak is one of the biggest MMA stars from the state of Arizona. He has fought all over the world, including four times in the UFC. He will face Nohelin Hernandez, who is one of the division’s top contenders. This will be an exciting main event at LFA 72, which will be our seventh event at Comerica Theatre in downtown Phoenix.”

Tickets for LFA 72 – Birchak vs. Hernandez are available for purchase NOW at Ticketmaster.com.

Birchak (13-6) has fought all over the world for nearly every major MMA promotion. The decorated amateur wrestler will now make his LFA debut in the same city where he made his UFC debut four and a half years ago. The 33-year-old will be bringing a stellar MMA résumé with him to the LFA Octagon. Birchak is a four-time UFC veteran, he fought on the fourth season of Bellator, and he competed in Japan three times for RIZIN. “El Toro” also made a name for himself on AXS TV by winning a bantamweight title on the network for the now defunct MFC promotion in Canada. Now the talented Tucsonan returns to the network looking to take out one of LFA’s top prospects in the main event of LFA 72.

Hernandez (10-2) returns to the LFA Octagon riding an impressive four-fight win streak. One of those wins came a year ago in his Bellator debut, but the biggest win during his current run as well as the biggest win of his career came this past fall in the co-main event of LFA 51. The man known as “Suave” defeated BJJ and Judo black belt Rolando Velasco via Unanimous Decision to solidify his status at the top of one of LFA’s deepest and most talented divisions. Now the AKA standout looks to up the ante. The 25-year-old will do this by leaving the comforts of the Bay Area in his native northern California to trek into the hostile territory of Arizona to face the biggest name opponent of his career at LFA 72.

The co-main event of LFA 72 will feature a high-stakes showdown between two of the promotion’s most respected fighters. Daniel Madrid (16-6) returns to the LFA Octagon riding the momentum of a three consecutive wins. The most recent win came against eleven-time UFC veteran Seth Baczynski, who also competed on two seasons of The Ultimate Fighter. Madrid, who is a black belt in BJJ, needed less than a round to submit Baczynski at LFA 59 this past February.

Madrid now looks to take another step into title contention when he faces Chris Harris (11-3) in the co-main event of LFA 72. Harris, like Madrid, is also looking for his second LFA win. His first came with a dominant performance against Cortez Coleman in the co-main event of LFA 15. More recently, Harris has picked up back-to-back wins over Bellator veterans Zak Bucia and Marcelo Alfaya. He now looks to run that streak to three when he heads to enemy territory on July 26th.