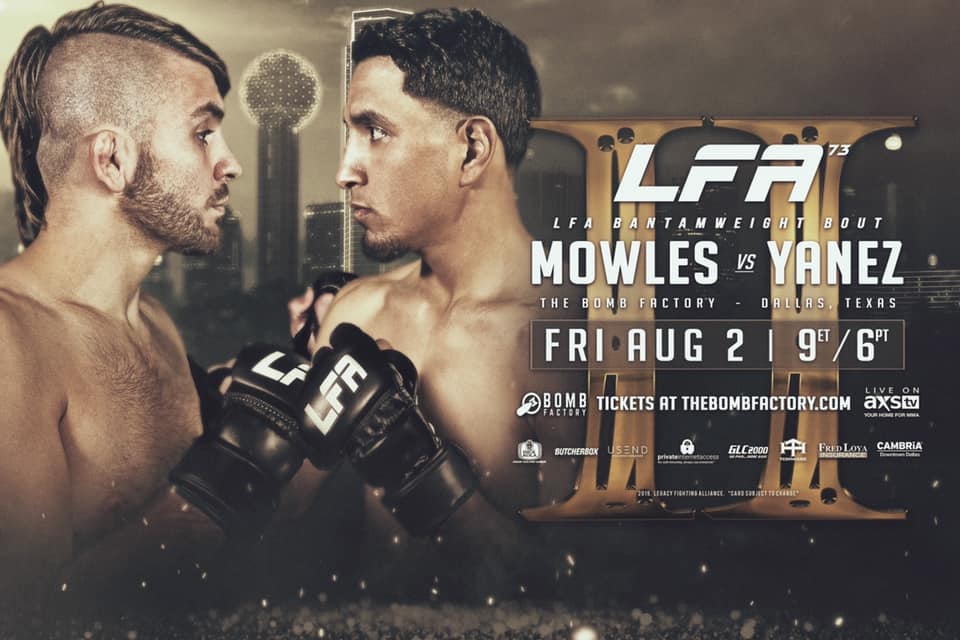 Tickets are on sale NOW through TheBombFactory.com

LAS VEGAS, Nevada – LFA CEO Ed Soares announced today that the promotion is headed back to its birthplace of Dallas in August with a headliner pairing two of Texas’ top bantamweight stars in a long-awaited rematch at the top of LFA 73. The card will also feature a high-profile showdown between two of the sport’s top female prospects.

The main event of LFA 73 will bring a high-stakes rematch to Big D. The headliner will see BJJ black belt Levi Mowles square off with longtime rival and former LFA title challenger Adrian Yanez in a rematch that is nearly five years in the making. LFA 73 – Mowles vs. Yanez 2 takes place Friday, August 2nd at The Bomb Factory in Dallas, Texas. The entire main card will be televised live and nationwide on AXS TV at 9 p.m. ET / 6 p.m. PT.

“I am excited to bring LFA back to Dallas, the birthplace of LFA,” stated Soares. “Levi Mowles and Adrian Yanez began their careers with us. They faced each other at Legacy FC 37 back when they were beginning their pro careers in 2014. They have since developed into two of the top bantamweight prospects in the sport. On Friday, August 2nd, their paths will meet once again in the main event of LFA 73.”

Tickets for LFA 73 – Mowles vs. Yanez 2 are available for purchase NOW at TheBombFactory.com.

Mowles (11-4) is looking to show that history has a way of repeating itself. In November 2014, Mowles was a prodigious, young jiu-jitsu practitioner looking to make the jump to pro MMA. The 19-year-old grappling whiz got that opportunity on the preliminary card of Legacy FC 37. Mowles’ pro debut came against one of Houston’s top young prospects in what was billed as the next chapter of Texas’ long sporting rivalry between Dallas and Houston, which is known as the I-45 Rivalry. However, it blossomed into much more than that. Mowles, who is now 24-years-old, won the fight via Unanimous Decision, but both men continued to win for the promotion in a variety of memorable ways. Mowles and Yanez are now two of the biggest prospects in LFA and the sport. The timing for a rematch is perfect. The longtime rivals will run it back at LFA 73.

Yanez (8-3) is a Houstonian and fellow LFA standout that also got his start in the sport with Legacy FC. Yanez grew up in the promotion just like Mowles. After enjoying a stellar amateur career for Legacy FC, he continued his success as a pro for the promotion. However, the majority of that success came after a hiccup in his second pro fight. That fight came against Mowles on the preliminary card of Legacy FC 37 just two weeks before his 21st birthday. On paper, that bout paired two young fighters coming from distinct grappling and striking backgrounds. Mowles got the decision that night, but Yanez is eager to show that he has closed the gap in the grappling department, which will allow him to showcase his feared fists. The 25-year-old knockout artist will get his long-awaited chance to avenge his first loss in the main event of LFA 73.

The feature fight of LFA 73 will see a flyweight showdown between two of the top women’s prospects in MMA. Wildly popular “All Hail” Hailey Cowan (3-1) returns after steamrolling her last three opponents inside the LFA Octagon. She will face Lisa Mauldin (3-1), who is a talented Californian with a reputation for playing spoiler against hometown favorites.

Cowan signed with LFA last year to much fanfare. She was a two-time National Collegiate Acrobatics & Tumbling Association (NCATA) All-American at Baylor University. As many MMA pundits suspected, Cowan’s superior athletic ability began to manifest itself into fearsome fighting potential in late 2018. After steamrolling two opponents in a six week span this past fall, which included a viral head kick KO at LFA 55, Cowan returned in March at LFA 63. That night, she finished a second consecutive Bellator veteran, but this time the win came via Rear Naked Choke with UFC President Dana White sitting cageside. Now the Waco native heads north to Dallas for the biggest test of her career at LFA 73.

Mauldin is the woman tasked with wrangling the high-flying Texan. The well-rounded southern Californian burst on to the global MMA scene in her LFA debut in May. That fight came at LFA 66 in Utah against one of Utah’s most beloved MMA figures in Kaytlin Neil. Mauldin was able to handle the hostile crowd in what would be her first fight outside of California. The Team Oyama standout had less experience than Neil, who is a Bellator veteran, but she made up for that with the help of former UFC champion Carla Esparza and LFA standouts Fernando Padilla, Christian Aguilera, and Desmond Torres in her camp. Mauldin now heads to Texas looking to play spoiler once again in her return to the LFA Octagon at LFA 73.

LFA 73 will be the ninth LFA event to take place in the City of Dallas. It will also be the seventeenth time that LFA has traveled to “The Lone Star State” of Texas. The entire main card of LFA 73 will be televised live and nationwide on AXS TV at 9 p.m. ET / 6 p.m. PT.