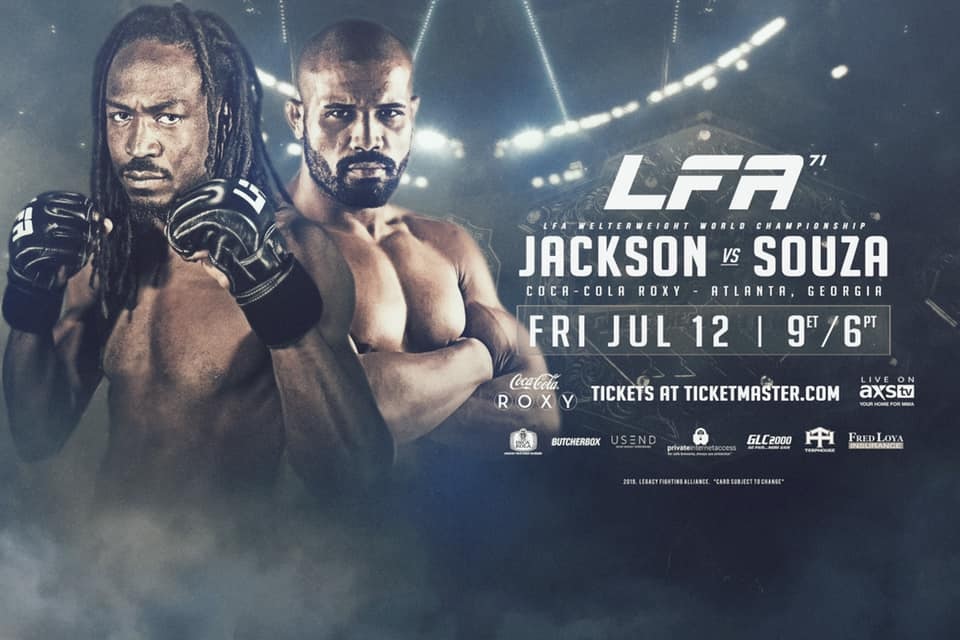 LAS VEGAS, Nevada — LFA CEO Ed Soares announced today that the promotion will have a new title fight at LFA 71. Junior Marques, who was scheduled to fight for the welterweight title, was denied entry into the country due to an immigration issue after his flight landed in the United States.

“Jason Jackson will now face Hemerson “Toco” Souza for the LFA welterweight championship at LFA 71,” stated Soares. “Junior Marques was denied entry into the country due to an immigration issue, so we are moving Souza up from the co-main event to face Jackson for the title. Stylistically, Jackson and Souza will give fight fans in Atlanta a fantastic headliner tomorrow night at the Coca-Cola Roxy in Atlanta, Georgia.”

Tickets for LFA 71 – Jackson vs. Souza are available for purchase NOW at Ticketmaster.com.

Jackson (9-3) is the top MMA prospect to hail from the Caribbean island nation of Jamaica. The 28-year-old Hard Knocks 365 standout has been considered one of the top welterweight prospects in the sport for the last four years. In that time, Jackson has competed on the UFC’s hit reality show The Ultimate Fighter 21, won multiple regional titles, and competed on the first season of Dana White’s Tuesday Night Contender Series. An ankle injury prevented Jackson from showing White his full potential that night, but he quickly rebounded with a pair of wins. The first came last summer via TKO over Jordon Larson at Bellator 204. The second came this past April via Arm-Triangle Choke against Scott Futrell in the co-main event of LFA 64. Now the man known as “The Ass-Kicking Machine” looks to capture LFA gold in the main event of LFA 71.

Souza (7-4) was originally scheduled to face former LFA title challenger Demarques Jackson in the co-main event of LFA 71. Jackson is a teammate of Souza’s new opponent Jason Jackson, who he will now be fighting for the vacant LFA welterweight title. The 29-year-old Evolução Thai MMA product has made a name for himself by competing exclusively in his home country’s talent-rich MMA scene. He made his professional debut five years ago and earned the nickname “Toco” (“Stump”) due to his strong and durable fighting style. The Andre “Dida” Amado protégé has trained with some of the best fighters in the world, including Legacy champion and newly crowned Bellator champion Rafael Lovato Jr.  “Toco” earned his LFA contract with an impressive showing in his most recent fight against UFC veteran Wendell Oliveira, who has 43 professional fights to his credit.

In 2017, RFA and Legacy FC merged to form LFA, the premier developmental organization in Mixed Martial Arts. The combined forces of LFA have launched the careers of over 160 athletes that have reached the pinnacle of MMA by competing in the UFC.  In May 2018, the promotion joined the London Trust Media Holdings group of companies.

LFA 71 will be the first LFA event to take place in the state of Georgia. Legacy FC hosted three events in the “Peach State” before the merger. The entire main card of LFA 71 will be televised live and nationwide on AXS TV at 9 p.m. ET / 6 p.m. PT.

About COCA-COLA ROXY:
The Coca-Cola Roxy, Atlanta’s brand new concert venue, opened in April of 2017. The 3,600 capacity venue is located in The Battery Atlanta, a mixed-use development next to SunTrust Park, home of The Atlanta Braves. The 53,000 square foot site has state of the art sound, lights and production capabilities for live music, corporate meetings and private events. Coca-Cola Roxy hosts approximately 40 shows per year and presents a diverse range of local, national and international artists and bands. Please visit their website at www.cocacolaroxy.com for more information.