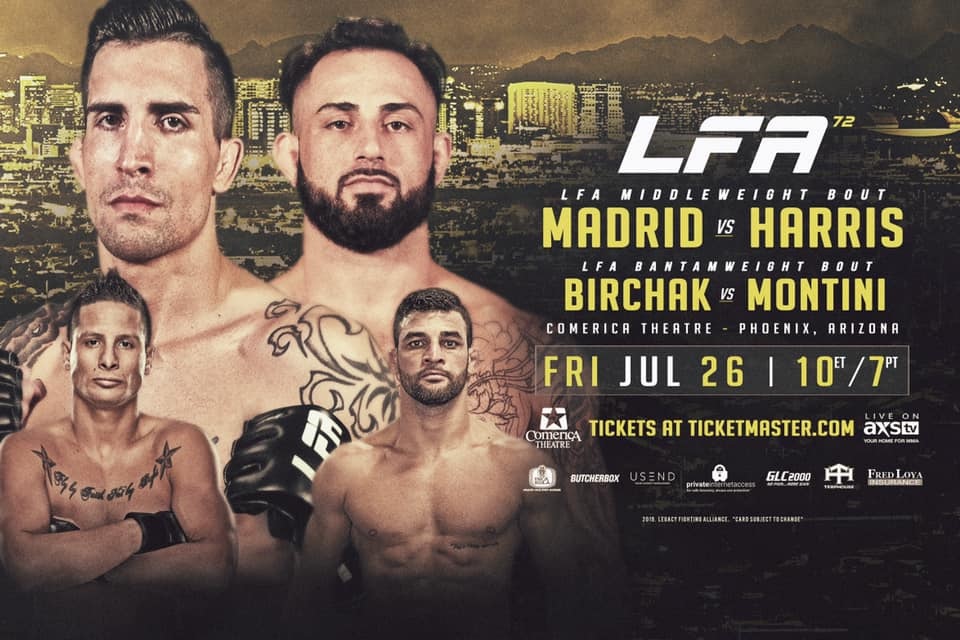 LFA 72 gets new main event: Middleweight Showdown in the Valley of the Sun

Tickets are on sale NOW through ComericaTheatre.com

LAS VEGAS, Nevada – LFA CEO Ed Soares announced today that there will be a new main event when the promotion returns to the Valley of the Sun at LFA 72. The new headliner will feature a showdown between two of the LFA middleweight division’s top contenders.

The new main event of LFA 72 will bring a high-stakes showdown to the state capital of Arizona. The headliner will see BJJ black belt and Arizona’s own Daniel “DemiGod” Madrid face top prospect Chirs Harris in a pivotal middleweight bout. LFA 72 – Madrid vs. Harris takes place Friday, July 26th at the Comerica Theatre in Phoenix, Arizona. The main card will be televised live and nationwide on AXS TV at 10 p.m. ET / 7 p.m. PT.

“LFA is returning to Arizona with a new main event,” stated Soares. “Nohelin Hernandez was called up to the UFC, so we are elevating Daniel Madrid vs. Chris Harris from the co-headliner to the main event. Madrid and Harris both have impressive wins in LFA, which makes this a key match-up in the middleweight division. Herenandez’s opponent Anthony Birchak will now face Raphael Montini in the co-main event. Birchak is one of the biggest MMA stars from the state of Arizona, while Montini is a main training partner of UFC champ-champ Henry Cejudo. LFA 72 is loaded with exciting fights, which will be our seventh event at Comerica Theatre in downtown Phoenix.”

Tickets for LFA 72 – Madrid vs. Harris are available for purchase NOW at ComericaTheatre.com.

Madrid (16-6) returns to the LFA Octagon riding the momentum of three consecutive wins. After facing eventual LFA champion and current Top 10 ranked UFC fighter Ian Heinisch in his LFA debut, Madrid has gone on an impressive run. The BJJ black belt scored a rare Omoplata submission victory against Daviante Jones. “DemiGod” then submitted Armando Murillo Jr. with a Guillotine Choke. The most recent win came against eleven-time UFC veteran Seth Baczynski, who also competed on two seasons of The Ultimate Fighter. Madrid needed less than a round to submit Baczynski in the co-main event of LFA 59. Now he is looking for a key LFA victory in the main event of LFA 72.

Harris (11-3) has experienced a similar path in LFA to Madrid. His lone loss for the promotion came against an eventual LFA champion in Brendan Allen, while he also holds a notable win in an LFA co-headliner. That win came against six-time Bellator veteran Cortez Coleman, who also competed on The Ultimate Fighter. Prior to his win over Coleman, the powerful Kansas native picked up a win at Bellator 150 over Julian Marquez. That win makes him the only person to defeat the current UFC star and former LFA standout in a bout outside of the UFC. Harris is now returning to the LFA Octagon in search of an even bigger win. He will have to accomplish that in enemy territory at LFA 72.