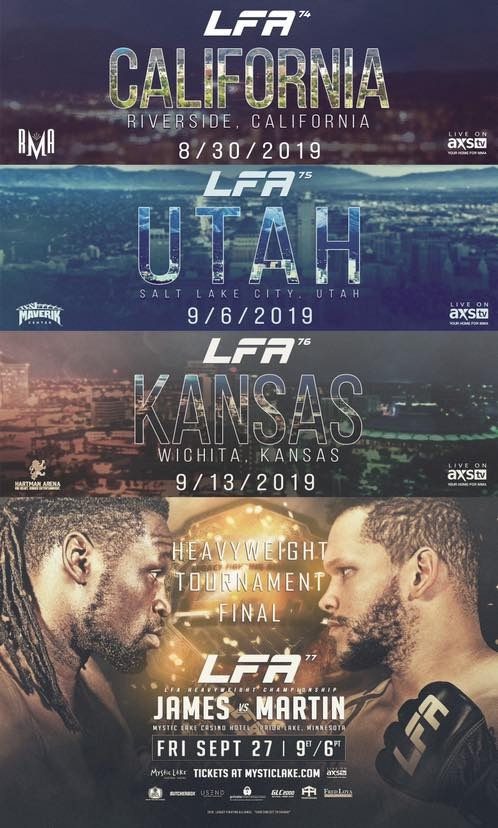 Full fight cards and event information about LFA 74, LFA 75, LFA 76 and LFA 77 will be announced soon. The entire main card of all four LFA events will be televised live and nationwide on AXS TV.

LFA 74 takes place Friday, August 30th at the Riverside Municipal Auditorium (RMA) in Riverside, California. The RMA is a Riverside landmark designed in 1928, which also serves as a World War I memorial to the 87 military members from Riverside County who died in service of our country and was commemorated by the National Register of Historic places in 1978. The RMA has been enhanced and upgraded through a $10 million renovation by the City of Riverside in 2011 and continues to serve the community as a meeting, special event, and live performance venue. The RMA is situated in the heart of Riverside’s downtown district within walking distance of many of Riverside’s prominent attractions.

Tickets for LFA 74 will be available for purchase at LFAtix.com beginning Wednesday, July 24 at 12:00 pm CT.

LFA 75 takes place Friday, September 6th at the Maverik Center in West Valley City, Utah, which is a suburb of the state capital Salt Lake City. The Maverik Center is the home of the ECHL’s Utah Grizzlies. Maverik Center gained international acclaim and exposure as the host venue for the Ice Hockey Championships at the 2002 Olympic Winter Games. The venue combines the modern amenities of a large arena with the service and intimacy of a small theater. This past May, the Maverik Center hosted LFA 66, which was the first LFA event hosted in the state of Utah. LFA will return to the Beehive State at LFA 75.

Tickets for LFA 75 are available for purchase NOW at SmithsTix.com.

LFA 76 takes place Friday, September 13th at the Hartman Arena in Park City, Kansas, which is a suburb of the state’s largest city Wichita. LFA 76 will be the first LFA event to take place in the “Sunflower State” of Kansas. Hartman Arena is a 6,500 seat, multi-purpose facility with 15 acres of on-site parking and is uniquely configured so that there is not a bad seat in the house. The arena has hosted a range of concerts from Alan Jackson and Slipknot, to New Kids On The Block, Earth Wind & Fire/Chicago, Jake Owen, Little Big Town, Dancing With The Stars, Alice Cooper, and many more. LFA joins Hartman’s prestigious event list at LFA 76.

Tickets for LFA 76 will be available for purchase at HartmanArena.com beginning Friday, July 26 at 12:00 pm CT.

LFA 77 – James vs. Martin takes place Friday, September 27th at the Mystic Lake Casino Hotel in Prior Lake, Minnesota. LFA 77 will be the twelfth LFA event to take place in the “Land of 10,000 Lakes”. Mystic Lake is located 25 minutes southwest of the Twin Cities of Minneapolis / St. Paul. It is Minnesota’s largest casino complete with slots, blackjack, bingo, entertainment, restaurants, bars, bus service, a state-of-the-art event center, and luxury hotel. The Mystic Lake Showroom will continue its long and exciting history of MMA competition by hosting the LFA Heavyweight Tournament Final at LFA 77. The title fight is between Daniel “The American Predator” James and Brett “Big Dog” Martin. The winner will be crowned the LFA Heavyweight Champion.

Tickets for LFA 77 – James vs. Martin are available for purchase NOW at at MysticLake.com.