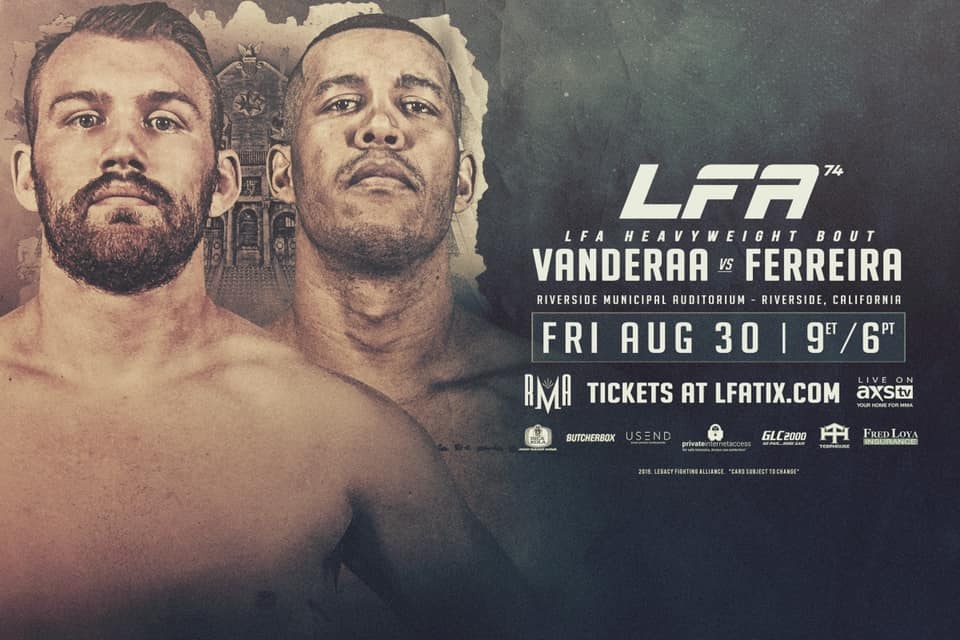 LFA HEADS TO SOUTHERN CALIFORNIA
WITH A
HEAVYWEIGHT SHOWDOWN

LAS VEGAS, Nevada — LFA CEO Ed Soares announced today that the promotion will be bringing a heavyweight showdown to southern California at the end of August. LFA title challenger Jared Vanderaa will return to the LFA Octagon to face hulking Brazilian heavyweight prospect Renan Ferreira in the main event of LFA 74.

“I am excited to have LFA return to my native southern California at LFA 74,” stated Soares. “Jared Vanderaa is a top American heavyweight prospect who has already challenged for our title. He returns after a dominant run competing in South Africa. He will face Renan Ferreira, who just competed in our four-man heavyweight tournament. Fight fans in the Inland Empire will get to see a showdown between two of the most exciting heavyweight prospects in the sport.”

Tickets for LFA 74 – Vanderaa vs. Ferreira are available for purchase NOW at Ticketmaster.com.

Vanderaa (9-3) makes his highly-anticipated return to the LFA Octagon in the main event of LFA 74. He returns while riding a fresh wave of momentum created during a dominant title reign in South Africa. Vanderaa first signed with LFA two summers ago as one of the best prospects in a division that is hungering for the next big thing. Vanderaa came up short in his first shot at LFA gold, but has regrouped and found his groove on the other side of the planet. The 27-year-old has strung together three consecutive TKO wins in South Africa. This includes defeating UFC veteran Ruan Potts for the EFC heavyweight title, which many consider to be the most prestigious title on the African continent. After a successful title defense against Ricky Misholas in March, Vanderaa returns to LFA looking to handle some unfinished business. The man known as “The Mountain” will get that chance in his own backyard of southern California at LFA 74.

Ferreira (5-2) signed with LFA this past spring with a fearsome reputation in his native Brazil. Standing 6 feet, 10 inches tall with an athletic 250-pound physique, the man known as “Problema” has been a huge problem for the heavyweight division. The Brazilian behemoth possesses physical gifts that create problems for everyone he faces. The 29-year-old, who boasts the frame of an NBA all-star, has also been busy learning the ways of combat under the watchful eye of UFC Hall of Fame member Antonio Rodrigo “Minotauro” Nogueira at Team Nogueira in Rio de Janeiro, Brazil. Ferreira made his debut for LFA at LFA 70 in June as a part of the four-man LFA heavyweight tournament. However, “Problema” ran into a problem of his own when he was disqualified due to illegal strikes he inadvertently landed on the back of Brett Martin’s head. Ferreira is now eager to right that wrong in his sophomore appearance for the promotion at LFA 74.

LFA 74 will be the eigth LFA event to take place in the state of California. RFA hosted eight events inside “The Golden State” before the merger. Further information will be announced soon. The entire main card of LFA 74 will be televised live and nationwide on AXS TV at 10 p.m. ET / 7 p.m. PT.

About RIVERSIDE MUNICIPAL AUDITORIUM:
The Riverside Municipal Auditorium (RMA) is a Riverside landmark designed in 1928, which also serves as a World War I memorial to the 87 military members from Riverside County who died in service of our country and was commemorated by the National Register of Historic places in 1978. The RMA has been enhanced and upgraded through a $10 million renovation by the City of Riverside in 2011 and continues to serve the community as a meeting, special event, and live performance venue. The RMA is situated in the heart of Riverside’s downtown district within walking distance of many of Riverside’s prominent attractions.