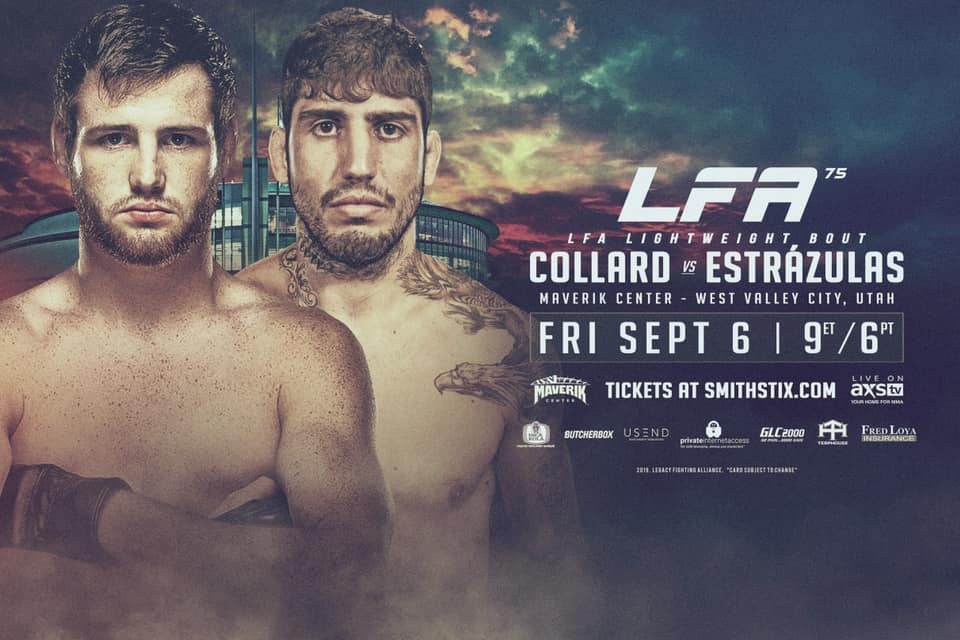 LFA returns to Utah with a Lightweight Showdown at LFA 75

LAS VEGAS, Nevada – LFA CEO Ed Soares announced in mid-July that the promotion will return to Utah in September. He has now announced that a high-stakes lightweight showdown will serve as the main event of LFA 75.

“I am excited to announce that LFA will be returning to Utah at LFA 75,” stated Soares. “Maverik Center is a state-of-the-art facility that hosted our first event in the state back in May. We are excited to return with a lightweight showdown between UFC veteran Clay Collard and BJJ black belt Arthur Estrázulas. Both men will be looking to make a statement in our exciting lightweight division on Friday, September 6th.”

Tickets for LFA 75 – Collard vs. Estrázulas are available for purchase through SmithsTix.com.

Collard (18-8) is the epitome of a fighter. Just two weeks after his eighteenth birthday, the Castle Dale, Utah native made his pro MMA debut. He needed a little over two-minutes to secure the TKO victory. One week later, he picked up his second pro win, also by TKO due to punches. This would become the aptly nicknamed “Cassius Clay’s” modus operandi. Collard would fight nine times in 2011 after making his debut in March of that year. He would take fights on back-to-back weekends more than once during that span and things did not slow down. This tenacious, take-on-all-comers attitude and blue collar work rate quickly made the teenager one of the most popular fighters in the “Beehive State”. Collard’s success and reputation caught the attention of the UFC and he would fight for the industry leader four times, which includes fighting eventual (and current UFC featherweight champion) Max Holloway on a week’s notice. The 26-year-old now looks to reassert himself at LFA 75.

Estrázulas (11-4) is a decorated BJJ black belt and GLORY kickboxing veteran. He also headlined RFA 42 and he is one of the most trusted cornermen at the world-renowned Kings MMA gym in southern California. However, his impressive ledger was punctuated in his LFA debut in June. Estrázulas faced powerhouse Bellator veteran Steve Kozola in an absolute barn-burner at LFA 69. The hype leading up the fight was trumped only by the fight itself. The bout lasted just over a half of a round, but it made up for lack of duration with an overload of fan elation. Kozola immediately blitzed Estrázulas with a barrage of punches from the sound of the opening bell and had Estrázulas on the figurative “ropes”, but the Brazilian deftly weathered the storm and took the fight to the ground where he utilized his world-class grappling skills to secure a Rear Naked Choke submission finish. The 30-year-old now looks to have his star soar to new heights by finding similar success in his first LFA headliner at LFA 75.