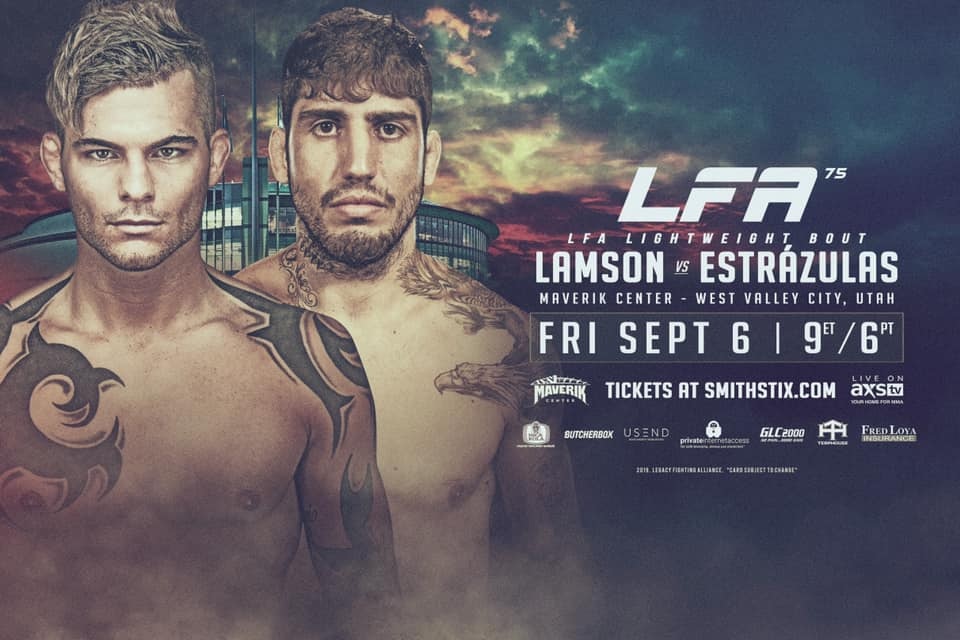 LFA returns to Utah with a Lightweight Showdown at LFA 75

LAS VEGAS, Nevada – LFA CEO Ed Soares announced last week that the promotion will return to Utah in September with a lightweight showdown. He has now announced that a different high-stakes lightweight bout will serve as the main event of LFA 75 after previously announced headliner Clay Collard was signed to the UFC. This is the second LFA headliner to be picked up by the UFC this summer shortly after being announced in an LFA main event.

“LFA will be returning to Utah with a new main event at LFA 75,” stated Soares. “Clay Collard was signed to the UFC just a few days after we announced that he would be headlining LFA 75. NCAA Division I wrestler and top MMA prospect Troy Lamson will now headline the card in Collard’s spot against the dangerous BJJ black belt Arthur Estrázulas. These two prospects will look to make a statement in our exciting lightweight division on Friday, September 6th.”

Tickets for LFA 75 – Lamson vs. Estrázulas are available for purchase through SmithsTix.com.

Lamson (13-2) jumped at the opportunity to fill in for Collard after the Utah native was signed to by the UFC just days after he was tabbed to headline LFA 75. Lamson hails from the state of Michigan where he was also an NCAA Division I wrestler at Big Ten powerhouse Michigan State. “Pretty Boy” is currently riding a 7-fight win streak, which includes a pair of wins over men who have been triumphant inside the LFA Octagon. Those two wins came against Robert Hale and Joe Elmore in his two most recent contests, which earned him the opportunity to headline LFA 75 in his debut for the promotion. The regional kingpin has shown a wide array of skills in his five-year professional career, but his wrestling roots have a way of shining through on most occasions. This was evident in his win over Elmore, when he was able to lift the LFA veteran and slam him to end the fight with a remarkable display of power and wrestling technique. The 27-year-old now heads to LFA and looks to put on a show at LFA 75.

Estrázulas (11-4) is a decorated BJJ black belt and GLORY kickboxing veteran. He also headlined RFA 42 and he is one of the most trusted cornermen at the world-renowned Kings MMA gym in southern California. However, his impressive ledger was punctuated in his LFA debut in June. Estrázulas faced powerhouse Bellator veteran Steve Kozola in an absolute barn-burner at LFA 69. The hype leading up the fight was trumped only by the fight itself. The bout lasted just over a half of a round, but it made up for lack of duration with an overload of fan elation. Kozola immediately blitzed Estrázulas with a barrage of punches from the sound of the opening bell and had Estrázulas on the figurative “ropes”, but the Brazilian deftly weathered the storm and took the fight to the ground where he utilized his world-class grappling skills to secure a Rear Naked Choke submission finish. The 30-year-old now looks to have his star soar to new heights by finding similar success in his first LFA headliner at LFA 75.