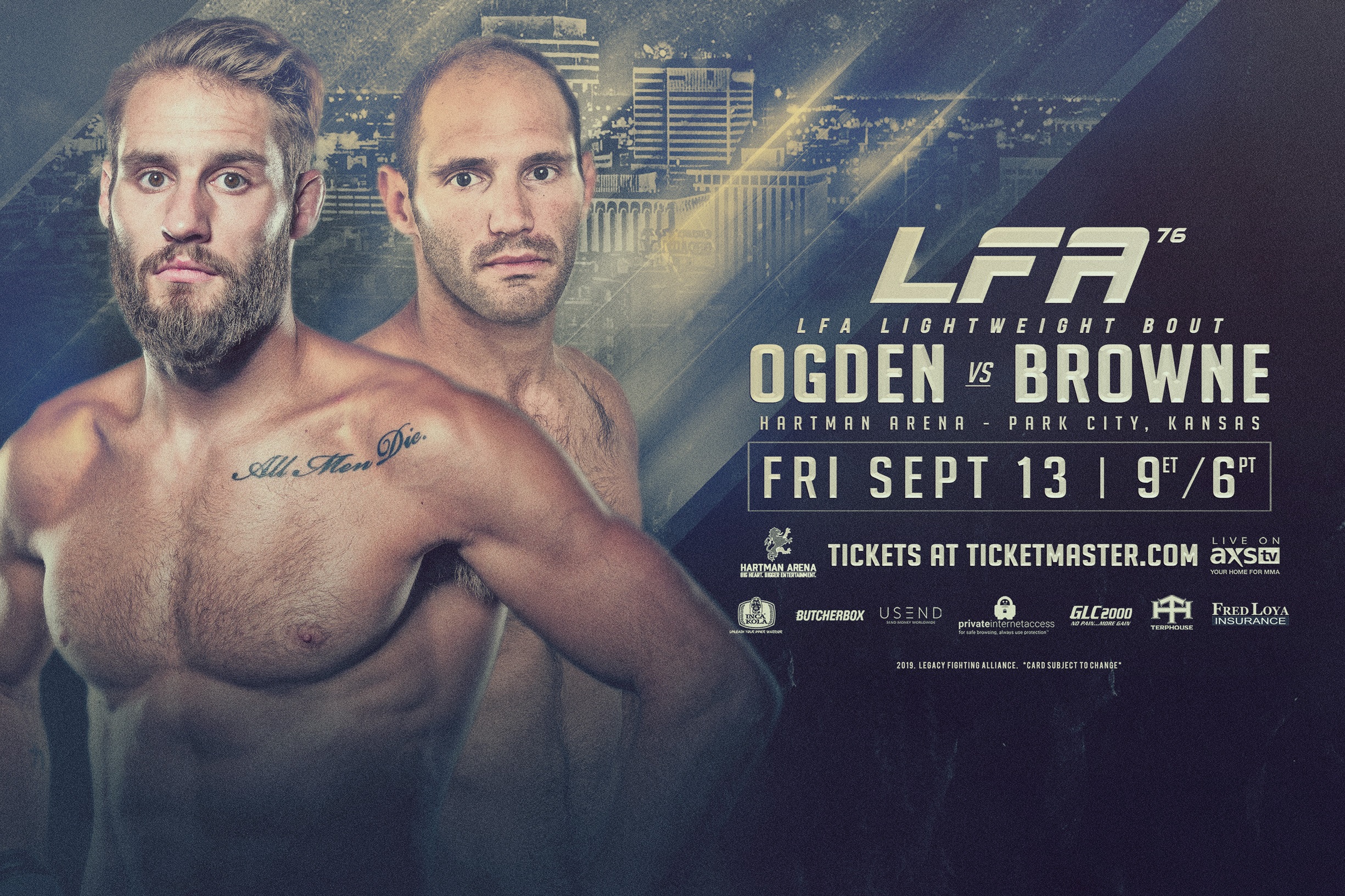 LAS VEGAS, Nevada – LFA CEO Ed Soares announced today that the promotion will be bringing a lightweight showdown to Kansas next month. LFA fan favorite Trey Ogden returns to face the highly-touted Nick Browne in the main event of LFA 76.

“I am excited to announce that LFA will be coming to Kansas at LFA 76,” stated Soares. “Trey Ogden has looked amazing inside the LFA Octagon. He returns after a third dominant performance for us in February. He will face Nick Browne, who is a talented BJJ black belt from Pennsylvania. This will be an exciting main event for our first visit to the Wichita area on September 13th.”

Tickets for LFA 76 – Ogden vs. Browne are available for purchase NOW at Ticketmaster.com.

Ogden (12-3) returns to the LFA Octagon looking to build on momentum he has built on the strength of his first three stellar performances for the promotion. He submitted T.J. Brown in his promotional debut and quickly became a fixture at the top of LFA fight cards. Now the James Krause protégé from Kansas City, Missouri has the opportunity to shine in a main event after winning two co-headlining bouts for the promotion in his last two outings for LFA. In those two bouts, Ogden faced local favorites. He submitted Travis Perzynski in Minnesota at LFA 34 and he out-dueled Anthony Baccam in Iowa at LFA 60. The 29-year-old will now get to fight in friendlier confines, while also looking to lay claim to the status as top contender in the lightweight division with another strong showing at LFA 76.

Browne (8-1) signed with LFA after compiling an impressive résumé in his native Pennsylvania. The BJJ black belt known as “Nyquil” began his career with seven consecutive wins, while facing some of the toughest opposition available. In fact, in just his second professional fight, Browne stopped an eventual Dana White’s Contender Series standout with punches in just 25 seconds. Then in his seventh win of that seven-fight win streak, Browne submitted an NCAA Division I wrestler with a kneebar at just 1:41 of Round 1. Those two wins came over opponents that currently have a combined record of 26-5. Browne is responsible for two of those losses and both came via first round stoppage. The 29-year-old regional kingpin is now eager to make an even bigger statement in the main event of LFA 76.

LFA 76 will be the first LFA event to take place in the “Sunflower State” of Kansas. Further information will be announced soon. The entire main card of LFA 76 will be televised live and nationwide on AXS TV at 9 p.m. ET / 6 p.m. PT.

About HARTMAN ARENA:
Hartman Arena is a 6,500 seat, multi-purpose facility with 15 acres of on-site parking and is uniquely configured so that there is not a bad seat in the house. Located in the Wichita, Kansas Metro Area, the arena has hosted a range of concerts from Alan Jackson and Slipknot, to New Kids On The Block, Earth Wind & Fire/Chicago, Jake Owen, Little Big Town, Dancing With The Stars, Alice Cooper, and many more. Visit their website at www.HartmanArena.com for more information.