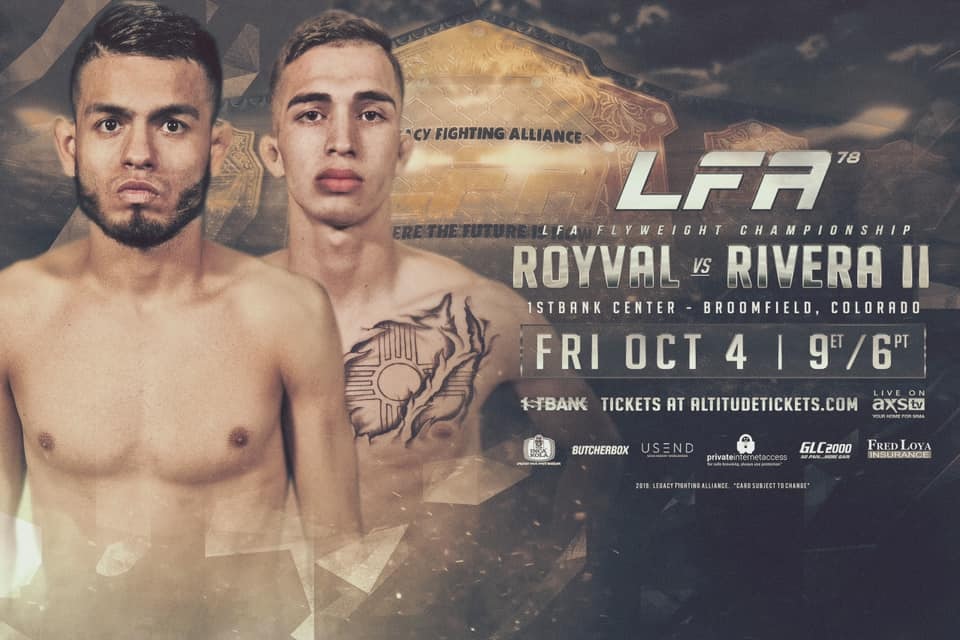 The main event of LFA 78 will feature a flyweight title fight between two former LFA title challengers when Brandon Royval faces Jerome Rivera in a rematch of their unforgettable 2018 encounter. LFA 78 – Royval vs. Rivera 2 takes place Friday, October 4th at the 1STBANK Center in Broomfield, Colorado. The entire main card will be televised live and nationwide on AXS TV at 9 p.m. ET / 6 p.m. PT.

“We are excited to bring the LFA flyweight championship to Colorado,” stated Soares. “Brandon Royval and Jerome Rivera first fought each other at LFA 39. It was a highly-anticipated bout that ended early due to an unfortunate elbow injury that Rivera sustained, while bracing himself against the cage. Now that both men are fully healed and healthy, we will run this back with the title on the line at LFA 78.”

Tickets for LFA 78 – Royval vs. Rivera II are available for purchase through AltitudeTickets.com.

Royval (9-4) is one of LFA’s most popular fighters for his action-packed fighting style and undeniable gameness. The Factory X Muay Thai product will headline an LFA event for a third consecutive fight after seeing his star rise to new heights last fall. The 26-year-old is a veteran of seven fights in LFA, but his last three are the fights that put him on the map. When Royval’s teammate Sid Bice withdrew from the co-main event of LFA 48, Royval stepped up on short notice and defeated Charles Johnson with dominant striking. Two months later, Royval again answered the call on short notice, when LFA flyweight champion Maikel Perez withdrew from his title defense at LFA 53 with an injury. Royval faced Casey Kenney for the LFA interim flyweight title in an entertaining five-round fight. He did not get the win, but he earned another headlining bout against UFC veteran Joby Sanchez at LFA 65. This time, Royval went back to his roots and won the fight via first round armbar. Now the confident Coloradan is looking for LFA gold at LFA 78.

Rivera (8-2) is getting a shot at redemption after sustaining one of the most grisly injuries in MMA history during his first meeting with Royval. That bout came at LFA 39 in May of 2018 and had all the makings of a barn-burner. Both men came into the fight as highly-touted prospects coming from rival camps from the border states of Colorado and New Mexico. Furthermore, both men possess similar skill sets that guarantee fast pace and plenty of action, while standing and on the ground. However, the New Mexican somehow dislocated his elbow while bracing himself against the cage in the opening minute and his right arm was left dangling beside him during a gruesome scene. The bout was mercifully waived off by the referee and resulted in a Royval win via TKO. The incident came in what was supposed to be Rivera’s comeback fight after coming up short in his first shot at the title at LFA 14. Now the 24-year-old will be looking for redemption as well as LFA gold, when he gets another shot at both Royval and the LFA title at LFA 78.

LFA 78 will be the seventh time that LFA has traveled to the state of Colorado. RFA visited “The Centennial State” eight times before the merger. The entire main card of LFA 78 will be televised live and nationwide on AXS TV at 9 p.m. ET / 6 p.m. PT.