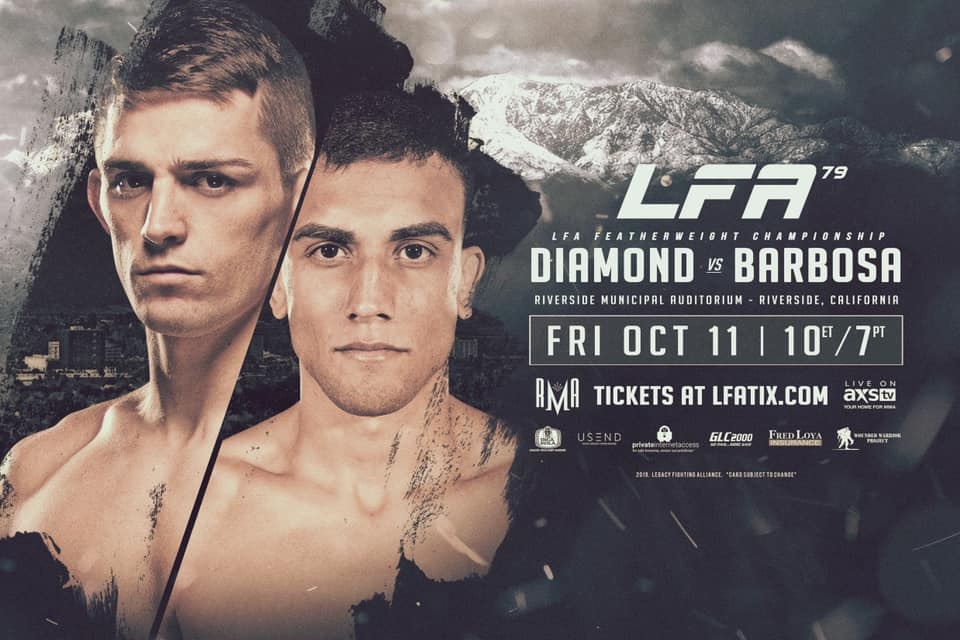 “I am excited to bring the LFA featherweight championship to southern California,” Soares exclaimed. “This will be our second trip to the Inland Empire and we will be crowning a new featherweight champion on October 11th. Tyler Diamond and Rafael Barbosa will give our west coast fight fans a memorable title fight at LFA 79.”

Tickets for LFA 79 – Diamond vs. Barbosa are available for purchase NOW at LFATIX.com.

Diamond (10-1) will return to the LFA Octagon fresh off an impressive debut for the promotion in May. Before signing with LFA, Diamond competed on the 27th season of the UFC’s hit reality show The Ultimate Fighter. The 28-year-old Team Alpha Male standout submitted LFA standout Dulani Perry in the quarter-finals of the tournament, which featured an entire cast of undefeated fighters. Diamond would advance to the semi-finals before eventually making his UFC debut at The Ultimate Fighter 27 Finale. He fought former RFA/Legacy standout Bryce Mitchell in a three-round war, but dropped a narrow Majority Decision. Diamond would then make his aforementioned LFA debut in the main event of LFA 66. That night he became the first man to defeat top prospect Jon Neal. Neal was 10-0 entering the bout. Now the former NCAA Division I wrestler is looking to win LFA gold in his sophomore appearance for the promotion at LFA 79.

Barbosa (12-1) is one of the most exciting prospects to come out of Brazil this year. The man known as “Coxinha” is a highly-decorated Karate black belt world champion. The world-class karateka won his LFA debut in March with UFC President Dana White sitting cageside. Barbosa’s win over Cameron Graves at LFA 63 was featured on the Season 4 premiere of Dana White: Lookin’ for a Fight. In fact, White had some encouraging words about Barbosa on the show before the fight took place, “Barbosa is 10-1…he’s 21-years-old though. This kid has so much more time to learn and grow.” The talented karateka doubled-down in his second outing for LFA with a beautiful standing elbow KO of former LFA title challenger Nate Jennerman. The KO came in the main event of LFA 68 at the end of May. Now Barbosa looks to make good on White’s inspiring words by continuing that growth by capturing LFA gold at LFA 79.

LFA 79 will be the ninth LFA event to take place in the state of California. RFA hosted eight events inside “The Golden State” before the merger. Further information will be announced soon. The entire main card of LFA 79 will be televised live and nationwide on AXS TV at 10 p.m. ET / 7 p.m. PT.

About RIVERSIDE MUNICIPAL AUDITORIUM:
The Riverside Municipal Auditorium (RMA) is a Riverside landmark designed in 1928, which also serves as a World War I memorial to the 87 military members from Riverside County who died in service of our country and was commemorated by the National Register of Historic places in 1978. The RMA has been enhanced and upgraded through a $10 million renovation by the City of Riverside in 2011 and continues to serve the community as a meeting, special event, and live performance venue. The RMA is situated in the heart of Riverside’s downtown district within walking distance of many of Riverside’s prominent attractions