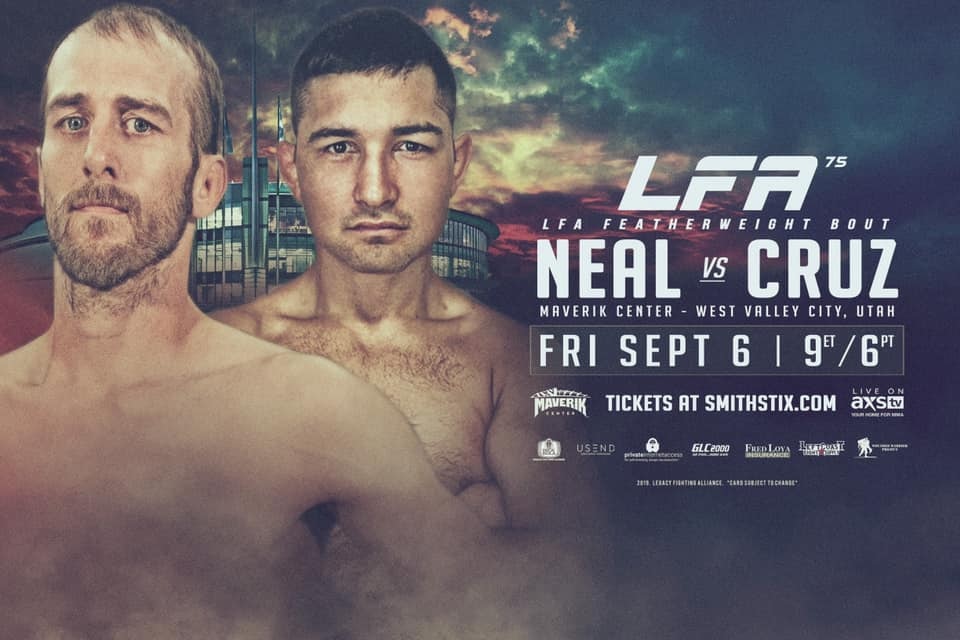 LFA 75 gets a new main event in Utah

LAS VEGAS, Nevada — LFA CEO Ed Soares announced today that LFA 75 will have a new main event when the promotion returns to Utah tomorrow night. This is the third change at the top of this event. Original headliner Clay Collard was signed by the UFC just days after his headlining bout at LFA 75 was announced. Collard was then replaced by Troy Lamson on August 12th, but Lamson has now withdrawn from the bout with an injury earlier this week. The LFA 75 co-main event between featherweight prospects Jon Neal and Andrew Cruz will now serve as tomorrow night’s headliner.

“LFA will return to Utah with a new main event at LFA 75,” stated Soares. “Clay Collard was signed to the UFC just a few days after we announced that he would be headlining LFA 75. His replacement Troy Lamson sustained an injury earlier this week, so we are now elevating our co-main event to headlining status. Jon Neal and Andrew Cruz are exciting prospects that always come to fight. They will look to make a statement in our deep featherweight division tomorrow night at LFA 75.”

Tickets for LFA 75 – Neal vs. Cruz are available for purchase through SmithsTix.com.

Neal (10-1) is the top prospect to hail from the state of Utah. The 31-year-old Ogden native has ran roughshod over the competition inside the “Beehive State” for over a decade before signing with LFA. In fact, his LFA debut came exactly eleven years after he made his pro MMA debut. Over the years, Neal has won regional titles in the state in multiple divisions, while picking up notable wins over Showdown Fights veteran Scott Casey and RFA veteran Jordan Clements. The One Hit MMA product signed with LFA after a decade-plus of wars with an unblemished record and an unquestioned claim to the throne atop Utah’s rugged MMA scene. Neal would engage in a “Fight of the Year” candidate in his LFA debut, but came up short on the score cards in the main event of LFA in May. Now the Aldo Oreggia protégé looks to get back to his winning ways in the main event of LFA 75.

Cruz (6-3) is a decorated war hero that has served our U.S. Army for ten years. While serving in the Middle East, Cruz was stationed at Victory Base Complex (VBC) about 20 minutes outside of Baghdad, Iraq. Staff Sergeant (SSG) Cruz is still active in the military, where he is currently a Bradley Fighting Vehicle (BFV) commander. Last September, Cruz made his Bellator debut in his hometown of Boise, Idaho at Bellator 205. He defeated featherweight prospect Nathan Stolen via armbar in the first round of their bout. The 28-year-old would follow up that win, the biggest win of his career, with another dominant performance against Drew Brokenshire this past February. Cruz finished the 28-fight veteran via TKO to earn a regional title in his hometown. Now the surging Idahoan is heading 4 hours southwest on the I-84 to face one of Utah’s favorite sons in the main event of LFA 75.

In 2017, RFA and Legacy FC merged to form LFA, the premier developmental organization in Mixed Martial Arts. The combined forces of LFA launched the careers of over 160 athletes that have reached the pinnacle of MMA by competing in the UFC.  In May 2018, the promotion joined the London Trust Media Holdings group of companies.