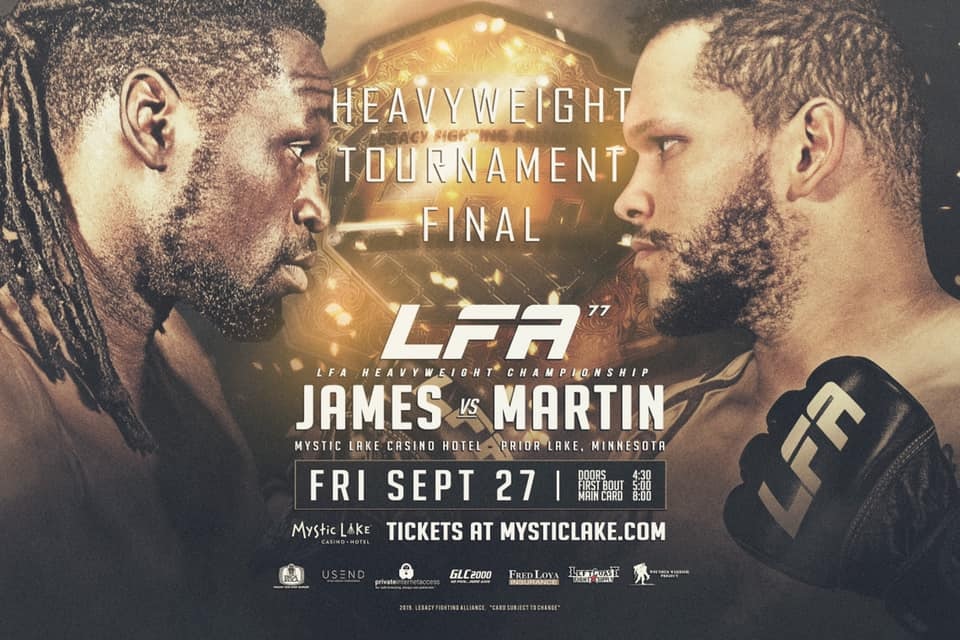 LAS VEGAS, Nevada – LFA CEO Ed Soares announced today that the promotion will return to Minnesota this Friday, as scheduled, with the LFA Heavyweight Tournament Final at LFA 77. The event will feature the culmination of the tournament and the crowning of a new LFA heavyweight champion. Meanwhile, LFA 78 and LFA 79, which were scheduled for the first two Fridays in October, have been postponed until a later date. The change of dates was needed, while LFA officials finalize an agreement with a new broadcasting partner.

“Anthem Sports & Entertainment recently acquired a majority interest in AXS TV, at which point LFA was advised that AXS TV would be discontinuing its live televised programming of LFA” stated Soares. “As a result, we are in the process of seeking a new broadcasting partner. Once our new broadcasting deal is finalized, we will continue developing the next generation of MMA stars in front of a large televised audience. In the meantime, we are excited to be doing just that on Friday, when we bring the LFA Heavyweight Tournament Final to Minnesota. Daniel James and Brett Martin advanced to the final of our four-man heavyweight tournament and will face each other with the title on the line at LFA 77. The fights on Friday will be recorded for broadcast at a later date. LFA 78 in Colorado and LFA 79 in California will also be postponed until a later date. Those dates will be released in conjunction with the announcement of an exciting new broadcasting deal.”

Tickets for LFA 77 – James vs. Martin are available for purchase NOW at MysticLake.com.

James (9-3-1) wasted little time putting the LFA heavyweight division on notice in his promotional debut last fall at LFA 50. “The American Predator” faced NCAA Division I wrestler turned undefeated MMA prospect Calyn Hull that night and stopped the former Wisconsin Badger with an onslaught of punches just 32-seconds into the second stanza. The win surprised many MMA scouts that were high on Hull, but it also resulted in James and Hull teaming up to train together. Moreover, it confirmed what many hardcore MMA fans have known for years. That is the fact that the former celebrity bodyguard is a stylistic nightmare for anyone. Knockout power in both hands with a strong Judo base makes the 6’5″, 265-pound powerhouse a tough match-up for anyone. That includes Patrick Martin, the man he faced in the first round of the LFA Heavyweight Tournament at LFA 67. James dispatched the former collegiate basketball player with his signature, vicious ground-and-pound.

Martin (7-1) is widely-regarded as the top, young American heavyweight prospect in MMA. The up-and-comer known as “Big Dog” proved to be just that long before he crossed over to MMA. The 25-year-old was an alpha dog on the wrestling mats in his native Michigan as well. Martin went undefeated his senior year at powerhouse Hesperia High School en route to becoming the 2012 heavyweight state champion. He then earned All-American honors at Muskegon Community College. More recently, Martin has won multiple heavyweight MMA titles, which includes a 68-second submission win over previously top-ranked AXS TV Fights heavyweight, LFA star, Contender Series standout, and TUF 28 alum Josh Parisian. That win earned him a spot in the LFA Heavyweight Tournament. In the first round of the tournament at LFA 70, Martin defeated the 6’10” behemoth Renan “Problema” Ferreira, when the Brazilian was disqualified for multiple illegal blows to the back of the head.