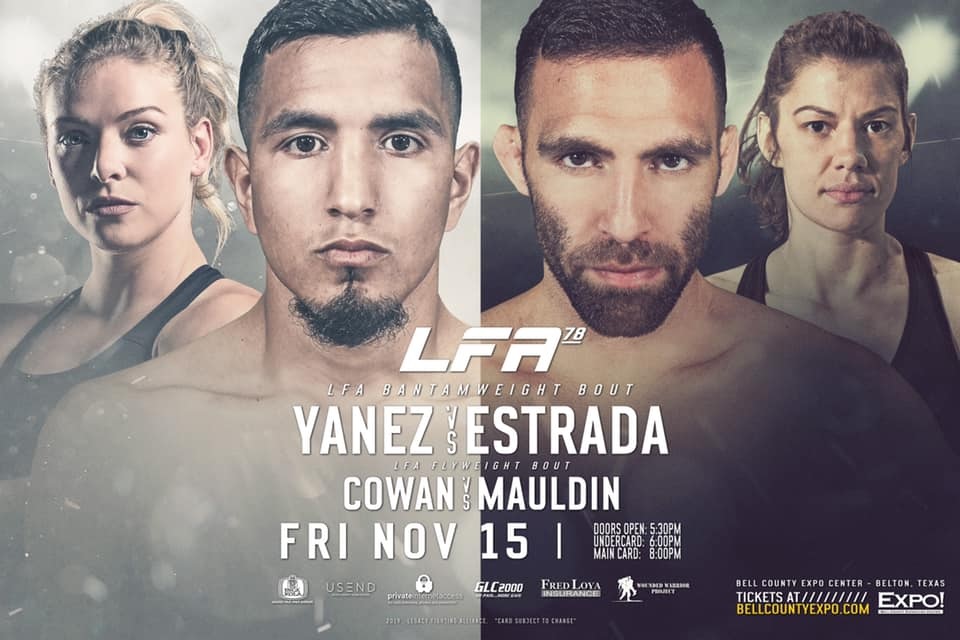 LAS VEGAS, Nevada – LFA CEO Ed Soares announced today that the promotion will head deep into the heart of Texas in November with a pair of high-stakes showdowns at the top of LFA 78.

“I am excited to bring LFA back to the Centroplex of Texas at LFA 78,” stated Soares. “Adrian Yanez and Kyle Estrada are dynamic bantamweights that are always looking for the knockout, while Hailey Cowan and Lisa Mauldin are two of the most promising fighters in women’s MMA. These four high-powered prospects all return to the LFA Octagon at the Bell County Expo Center on Friday, November 15th.”

Tickets for LFA 78 – Yanez vs. Estrada are available for purchase NOW at BellCountyExpo.com.

Yanez (9-3) is a Houstonian and LFA standout that got his start in the sport with Legacy FC before the merger. Yanez has grown up in the promotion. After enjoying a stellar amateur career for Legacy FC, he continued his success as a pro for the promotion. That includes winning a pair of LFA bouts in emphatic fashion and a memorable five-round title fight. These are the types of fights that coaches, fans, and promoters recognize as special moments in a young fighter’s career. The moments where a fighter transforms from a once promising prospect into a bona fide star. The 25-year-old Metro Fight Club standout now looks to take the next step back into title contention at LFA 78.

Estrada (10-4) is an Indiana native that now calls southern California home. On the west coast, “The Hoosier” surrounded himself with some of the best in the business. That includes UFC star and RFA great Alan Jouban, who took him under his wing at both Black House MMA and Saekson Muay Thai. Upon signing with LFA this past summer, the results have been spectacular. Estrada won his LFA debut at LFA 69 with an onslaught of leg kicks. 8 weeks after that TKO win, Estrada struck again at LFA 73 with an impressive win over Cody Freeman. Now the 29-year-old has his sights set on Yanez in what will be a battle of elite strikers with uniquely different styles of finding the KO.

The co-main event of LFA 78 will see a flyweight showdown between two of the top women’s prospects in MMA. Wildly popular “All Hail” Hailey Cowan (4-1) returns home after steamrolling her last four opponents inside the LFA Octagon. She will face Lisa Mauldin (3-1), who is a talented Californian with a reputation for playing spoiler against hometown favorites. Cowan and Mauldin were originally scheduled to face each other this past summer at LFA 73 in Dallas, which adds another layer of intrigue to this highly-anticipated bout.

Cowan signed with LFA last year to much fanfare. She was a two-time National Collegiate Acrobatics & Tumbling Association (NCATA) All-American at Baylor University. As many MMA pundits suspected, Cowan’s superior athletic ability began to manifest itself into fearsome fighting potential in late 2018. After trouncing two opponents in a six week span last fall, which included a viral head kick KO of Jessica Sotack at LFA 55, Cowan returned in March at LFA 63. That night, she finished Sarah Click, with UFC President Dana White sitting cageside. Cowan then defeated a third consecutive Bellator veteran in Jessica Middleton at LFA 73. Now the Waco native is coming home to the Centroplex of Texas for the biggest test of her career at LFA 78.

Mauldin is the woman tasked with wrangling the high-flying Texan. The well-rounded southern Californian burst on to the global MMA scene in her LFA debut this past May. That fight came at LFA 66 in Utah against one of Utah’s most beloved MMA figures in Kaytlin Neil. Mauldin was able to handle the hostile crowd in what would be her first fight outside of California. The Team Oyama standout had less than half the experience of Neil, who is a Bellator veteran, but Mauldin made up for that with the help of former UFC champion Carla Esparza and LFA standouts Fernando Padilla, Christian Aguilera, and Desmond Torres in her camp. Mauldin now heads to Texas looking to play spoiler once again in her return to the LFA Octagon at LFA 78.

LFA 78 will be the third LFA event to take place in the Centroplex of Texas. It will also be the eighteenth time that LFA has traveled to “The Lone Star State” of Texas.

About the BELL COUNTY EXPO CENTER:
Whether you’re in search of great music, championship rodeos, or exciting motocross action, the Bell County Expo Center, home of the Central Texas State Fair, is truly the center of it all. Just a short trip down I-35 from virtually anywhere in Texas will take you to Central Texas’ best entertainment arena. Please visit their website at bellcountyexpo.com for more information.