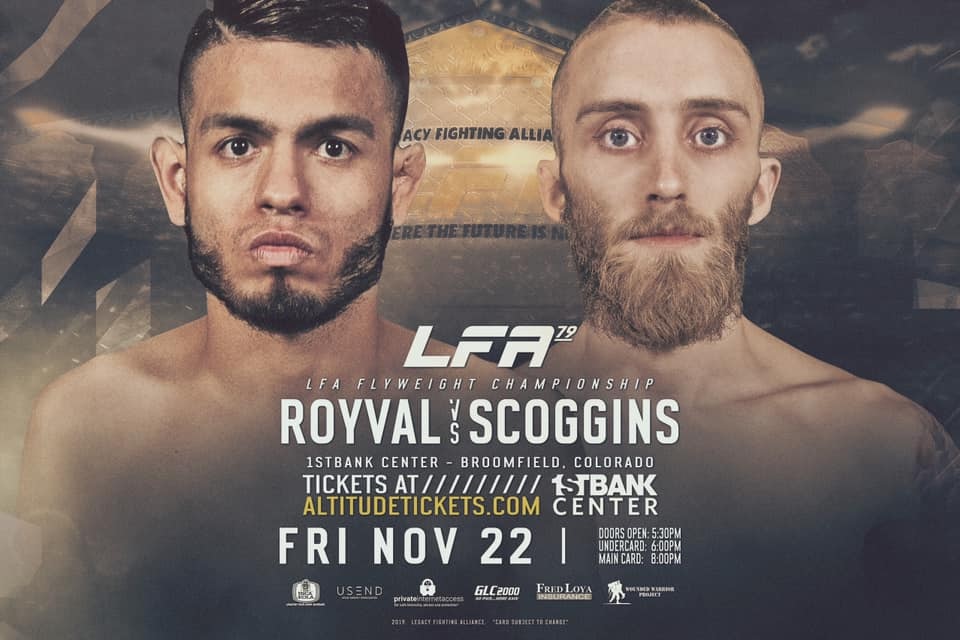 “We are excited to bring the LFA flyweight championship to Colorado,” stated Soares. “Brandon Royval and Jared Scoggins are two of the most highly-regarded flyweight prospects in the sport. Royval is coming off a highlight reel armbar vicotry over UFC vet Joby Sanchez and Scoggins is riding a 4-fight win streak that started back at LFA 8. The winner of Royval vs. Scoggins will join a prestigious group as three of our previous flyweight champions were signed by the UFC.

Tickets for LFA 79 – Royval vs. Scoggins are available for purchase through AltitudeTickets.com.

Royval (9-4) is one of LFA’s most popular fighters, who will be headlining an LFA event for a third consecutive fight after seeing his star rise to new heights last fall. The 27-year-old Factory X Muay Thai standout is a seven-time LFA veteran, but his last three are the fights that put him on the map. When his teammate Sid Bice withdrew from the co-main event of LFA 48, Royval stepped up on short notice and defeated Charles Johnson with dominant striking. Two months later, Royval again answered the call on short notice, when LFA flyweight champion Maikel Perez withdrew from his title defense at LFA 53 with an injury. Royval faced Casey Kenney for the LFA interim flyweight title. He did not get the win, but he earned another headlining bout against UFC veteran Joby Sanchez at LFA 65. This time, Royval went back to his roots and won the fight via first round armbar victory. Now the confident Coloradan is looking for LFA gold at LFA 79.

Scoggins (9-1) is the younger brother of former UFC standout Justin Scoggins, who is currently making a name for himself in Japan fighting for Rizin. The proud South Carolinian is looking to further his family’s fighting name as both his older brother and sister-in-law have also found success in MMA. Scoggins first came to LFA at LFA 8 where he defeated top flyweight prospect Juan Puerta. Scoggins is the last man to defeat Puerta and he did so by utilizing a signature Scoggins style that is heavily influenced by karate. The entertaining striker controlled the fight to earn a one-sided Unanimous Decision in front of his thoroughly entertained home crowd. Now the younger Scoggins brother is looking to take out another highly-regarded prospect in Royval, but will have to do so with the crowd working against him. The 24-year-old karateka will trek to the Rocky Mountains to battle Royval with the LFA flyweight championship on the line at LFA 79.

LFA 79 will be the seventh time that LFA has traveled to the state of Colorado. RFA visited “The Centennial State” eight times before the merger.

About the 1STBANK CENTER:
1STBANK Center is the premiere mid-sized event venue in the Denver area. The venue can hold up to 6,500 people and can accommodate live music, family shows, sporting events, community functions and more. Please visit their website at 1stbankcenter.com for more information.