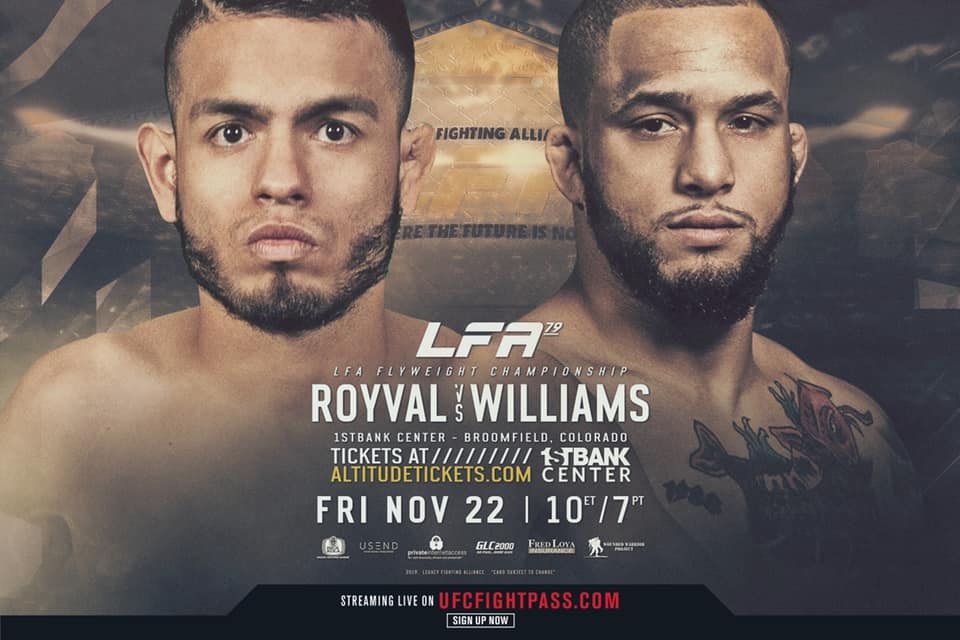 LAS VEGAS, Nevada – LFA CEO Ed Soares announced today that LFA 79 will have a new flyweight title fight when the promotion returns to Colorado this Friday. The change occurred after Jared Scoggins withdrew from the championship bout with an injury.

“We are excited to bring the LFA flyweight championship to Colorado,” stated Soares. “Jared Scoggins was forced to withdraw from the title fight with an injury. Brandon Royval will now face one of the most experienced fighters in the flyweight division. Nate Williams is a Bellator veteran with nearly 50 fights to his credit. Royval is coming off a highlight reel armbar victory over UFC veteran Joby Sanchez, while Williams is coming off back-to-back regional title fight victories in his home state of Iowa.” .”

Tickets for LFA 79 – Royval vs. Williams are available for purchase through AltitudeTickets.com.

Royval (9-4) is one of LFA’s most popular fighters, who will be headlining an LFA event for a third consecutive fight after seeing his star rise to new heights last fall. The 27-year-old Factory X Muay Thai standout is a seven-time LFA veteran, but his last three are the fights that put him on the map. When his teammate Sid Bice withdrew from the co-main event of LFA 48, Royval stepped up on short notice and defeated Charles Johnson with dominant striking. Two months later, Royval again answered the call on short notice, when LFA flyweight champion Maikel Perez withdrew from his title defense at LFA 53 with an injury. Royval faced Casey Kenney for the LFA interim flyweight title. He did not get the win, but he earned another headlining bout against UFC veteran Joby Sanchez at LFA 65. This time, Royval went back to his roots and won the fight via first round armbar victory. Now the confident Coloradan is looking for LFA gold at LFA 79.

Williams (29-18) made his pro MMA debut nearly 12 years ago in his home state of Iowa. The man known as “Teddy Bear” burst on to the scene by utilizing a high-tempo fight style that employs a stifling grappling game. In fact, Williams will enjoy a return of sorts, as his eighth pro fight took place ten years ago for Ring of Fire inside the 1STBANK Center, which will be hosting his title fight on Friday. Williams possesses an admirable reputation for his gameness and readiness. He was in attendance at LFA 60 earlier this year when the promotion visited his hometown of Des Moines, Iowa. He made it known to LFA officials at that event about his desire to compete for the premier proving ground in MMA. The 31-year-old scrapper immediately answered the call when given the opportunity to replace Scoggins for a shot at the title. He will now trek back to the Rocky Mountains to battle Royval for the LFA flyweight title at LFA 79.

LFA 79 will be the seventh time that LFA has traveled to the state of Colorado. RFA visited “The Centennial State” eight times before the merger. The entire main card of LFA 79 will be televised live and nationwide on UFC FIGHT PASS at 10 p.m. ET / 7 p.m. PT.

About the 1STBANK CENTER:
1STBANK Center is the premiere mid-sized event venue in the Denver area. The venue can hold up to 6,500 people and can accommodate live music, family shows, sporting events, community functions and more. Please visit their website at 1stbankcenter.com for more information.