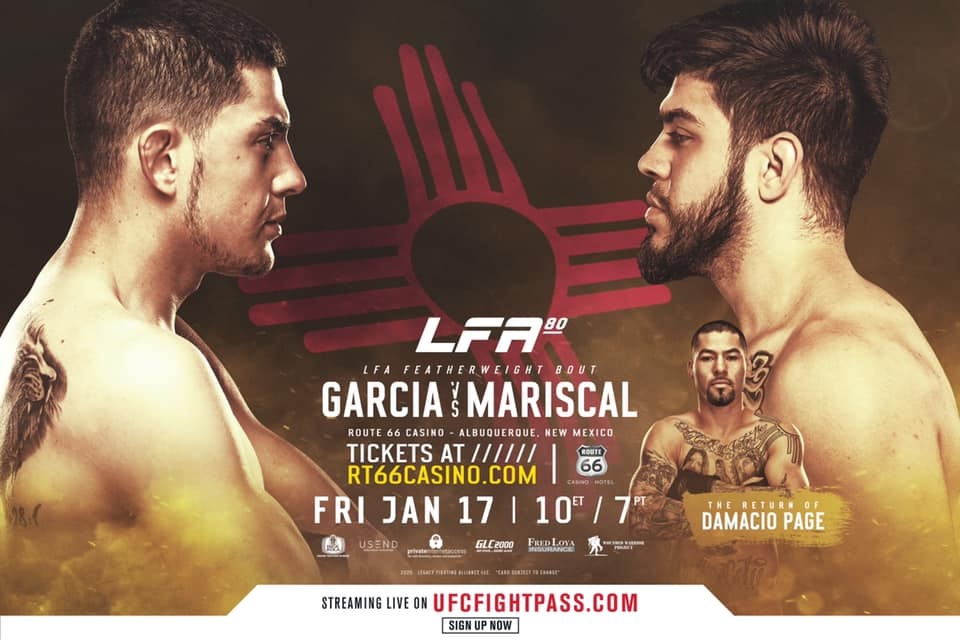 LFA kicks off 2020 in the Land of Enchantment at LFA 80 – Garcia vs. Mariscal

PLUS THE RETURN OF:

TICKETS on sale NOW through RT66Casino.com

LAS VEGAS, Nevada – LFA CEO Ed Soares announced today that the promotion will kick off its busy 2020 schedule in the Land of Enchantment. LFA 80 will spotlight an explosive featherweight war and the return of a local MMA pioneer when the promotion returns to New Mexico in January.

“I am excited to announce that we are kicking off our busy 2020 schedule with an action-packed LFA event in New Mexico,” stated Soares. “Steve Garcia and Chepe Mariscal are two of the most exciting prospects in the sport, while Damacio Page is one of the most beloved fighters in New Mexico’s long combat sports history. This is the perfect way for LFA to start the new year on UFC FIGHT PASS. The action will go down at the world-class Route 66 Casino Hotel on January 17th.”

Tickets for LFA 80 – Garcia vs. Mariscal are available for purchase through RT66Casino.com.

Garcia (10-3) is one of the hottest prospects in the high desert of New Mexico, which is a melting pot for top MMA talent. The 27-year-old is coming off a first round TKO win over LFA standout Desmond Torres on Dana White’s Contender Series this past August, that would have likely secured him a UFC contract if it were not for a weight-cutting mishap the day before. Garcia came in heavy for the bantamweight contest, but he did enough to impress the UFC President to the point where White gave him some advise during his post-fight comments. After stating that, “The kid looked really good tonight. You can’t look better than he looked tonight”, White added that Garcia should move up a weight class. “What I would like to see this kid do is move up a weight class to 45. He’s getting older, it’s going to be harder to make that weight, and he’s huge. He’s huge at that weight. Get a couple of fights and see how does at 45 and we’ll take a look at him again.” Garcia will heed the advice of the UFC boss and take on a top featherweight prospect in the main event of LFA 80.

Mariscal (10-4) is the Colorado based powerhouse that won the first LFA headliner of 2019. He now plans to do the same in 2020. Pegged for greatness before ever competing in a professional MMA, the man known as “Chepe” began competing in amateur MMA at 20-years-old. Now at age 27, Mariscal has compiled a combat sports résumé that makes most heads turn. IMMAF world champion, IMMAF national champion, 18-1 amateur MMA record with 17 finishes, two-time regional MMA champion as a professional fighter, nine-time BJJ champion, three-time kickboxing champion, NJCAA national qualifier in wrestling, and Judo black belt. Mariscal was also one of the main training partners for former UFC bantamweight champion T.J. Dillashaw after moving to Colorado to join Elevation Fight Team. These achievements led Mariscal to the defining moment in his career at LFA 57, when he became the first man to defeat the highly-touted Youssef Zalal. The proud Mexican-American is now eager to win another LFA headliner. This time he will face New Mexico’s top prospect at LFA 80.

The co-main event of LFA 80 will feature the return of one of New Mexico’s most beloved fighters as Page (20-10) returns to action for the first time in over two years. Originally scheduled to co-headline LFA 58 twelve months ago during LFA’s inaugural visit to New Mexico, Page is now set to co-headline LFA 80 in the promotion’s second visit to the state.

Page is widely credited for helping pave the way for the lower weight classes in his home state of New Mexico and throughout the sport of MMA. He began competing as a professional in 2005 and went on to carve out one of the biggest fighting legacies in New Mexico’s long combat sports history. Page is a proud Albuquerquean, who fought for both the UFC and WEC as a bantamweight for four and a half years. He then went on to become a Legacy FC champion at flyweight and was a cast member on the UFC’s hit reality show The Ultimate Fighter: Tournament of Champions. While reigning supreme for Legacy FC, “The Angel of Death” landed one of the most devastating one-punch KO victories in MMA history and also headlined the historic RFA vs. Legacy event.

In 2017, RFA and Legacy FC merged to form LFA, the premier developmental organization in Mixed Martial Arts. The combined forces of LFA launched the careers of over 170 athletes that have reached the pinnacle of MMA by competing in the UFC. In May 2018, the promotion joined the London Trust Media Holdings group of companies. In November 2019 the promotion announced a broadcast partnership with UFC FIGHT PASS®.

LFA 80 will be the second LFA event to take place in the state of New Mexico. RFA and Legacy FC visited the “Land of Enchantment” a combined total of three times before the merger. The entire main card of LFA 80 will be televised live and nationwide on UFC FIGHT PASS at 10 p.m. ET / 7 p.m. PT.