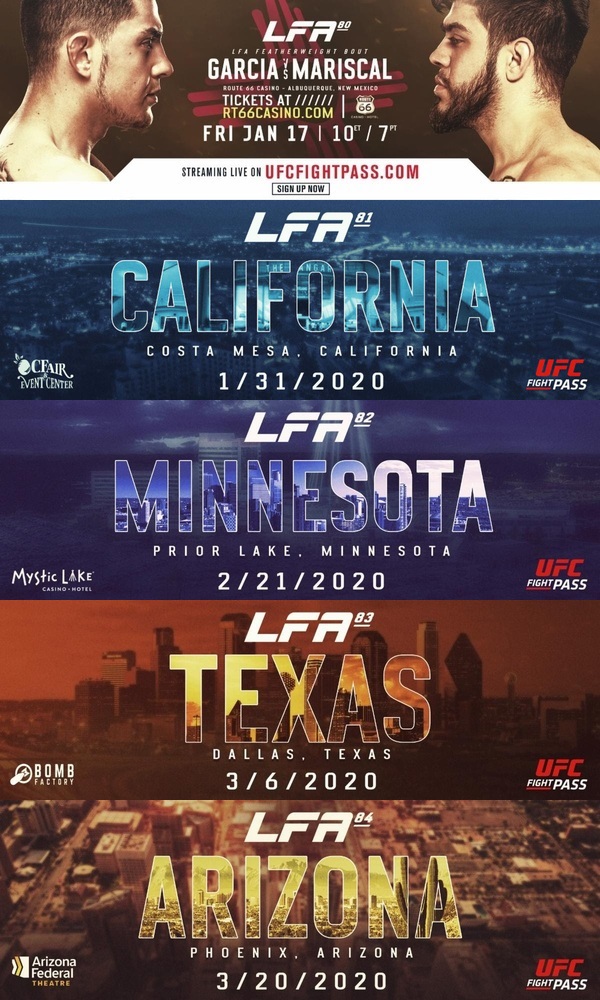 LAS VEGAS, Nevada – Legacy Fighting Alliance (LFA) announced today that the promotion will host its first five events of 2020 across five states to kick off the new year. The action-packed MMA events will take place in New Mexico, California, Minnesota, Texas, and Arizona.

LFA President Sven Bean handles all venue negotiations for the promotion and had this to say:

“As soon as we signed the deal with UFC FIGHT PASS, I immediately went to work contacting venues. With the twenty event schedule for 2020, it allowed me to work with all of our existing top tier markets and venue partners. We will also be returning to some markets that have proven successful over the years, but until recently we weren’t able to schedule dates at those venues. Lastly we will soon be announcing a handful of new agreements with casinos, and other venue partners for events in Q2 and Q3. These events will be in debut markets for the LFA, opening up new territories for us. All in all, 2020 is stacking up to be our best promotional schedule yet!”

Full fight cards and event information about LFA 80, LFA 81, LFA 82, LFA 83, and LFA 84 will be announced soon. The entire main cards of all five LFA events will be available worldwide on UFC FIGHT PASS®.

Tickets for LFA 80 are available for purchase NOW at RT66Casino.com.

LFA 81 takes place Friday, January 31st at The Hangar at the OC Fair & Event Center in Costa Mesa, California. LFA 81 will be the ninth LFA event to take place in the state of California. The OC Fair & Event Center is the home of the annual OC Fair, which welcomes more than 1.3 million visitors each summer. The venue is also home to more than 150 year-round events including the OC Market Place every weekend, as well as Imaginology, a free STEAM-related event; Centennial Farm, a three-acre working farm; Heroes Hall, a veterans museum and education center; and Table of Dignity, an agricultural workers memorial.

Tickets for LFA 81 will be available for purchase at LFAtix.com.

LFA 82 takes place Friday, February 21st at the Mystic Lake Showroom inside the Mystic Lake Casino Hotel in Prior Lake, Minnesota. LFA 82 will be the thirteenth LFA event to take place in the “Land of 10,000 Lakes”. Mystic Lake is located 25 minutes southwest of the Twin Cities of Minneapolis / St. Paul. It is Minnesota’s largest casino complete with slots, blackjack, bingo, entertainment, restaurants, bars, bus service, a state-of-the-art event center, and luxury hotel.

Tickets for LFA 82 will be available for purchase at MysticLake.com.

LFA 83 takes place Friday, March 6th at The Bomb Factory in Dallas, Texas. LFA 83 will be the tenth LFA event to take place in the City of Dallas. It will also be the nineteenth time that LFA has traveled to “The Lone Star State” of Texas. The Bomb Factory is a historic venue that accommodates up to 4,300 fans, consists of a mezzanine, VIP suites, and premium reserved seating options. The Bomb Factory is a state-of-the-art, 50,000 square foot venue located in the heart of Dallas’ world-famous Deep Ellum neighborhood, which is known for its rich culture of arts and entertainment.

Tickets for LFA 83 will be available for purchase at TheBombFactory.com.

Tickets for LFA 84 will be available for purchase at ArizonaFederalTheatre.com.

In 2017, RFA and Legacy FC merged to form LFA, the premier developmental organization in Mixed Martial Arts. The combined forces of LFA launched the careers of over 170 athletes that have reached the pinnacle of MMA by competing in the UFC. In 2018, the promotion joined the London Trust Media Holdings group of companies. In 2019, the promotion announced a broadcast partnership with UFC FIGHT PASS®.