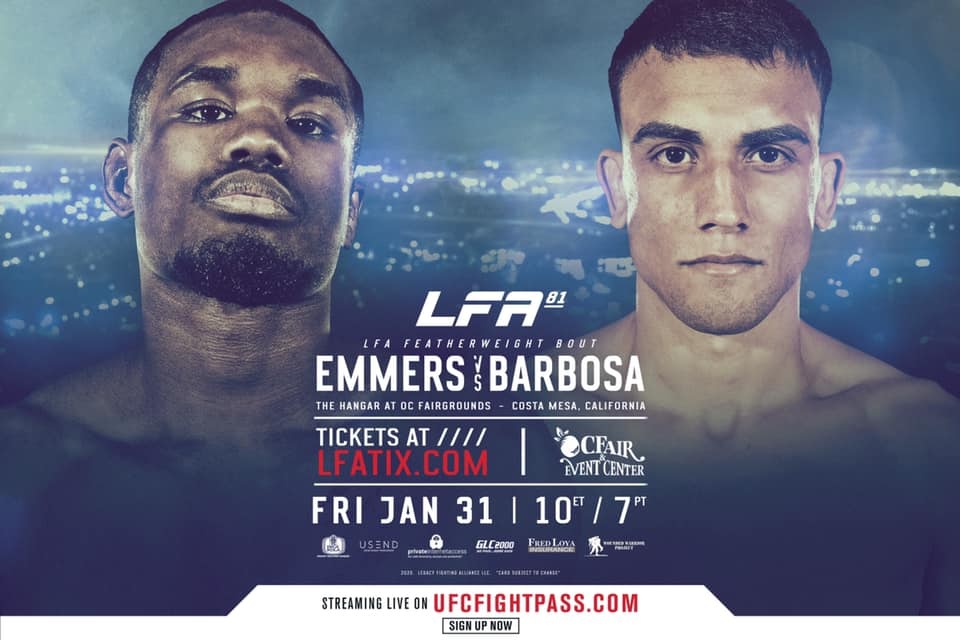 TICKETS on sale NOW through LFAtix.com

The main event of LFA 81 will feature a featherweight showdown between LFA and ‘Dana White: Lookin’ for a Fight’ standouts Jamall “Pretty Boy” Emmers and Rafael “Coxinha” Barbosa. LFA 81 – Emmers vs. Barbosa takes place Friday, January 31st at The Hangar at the OC Fair & Event Center in Costa Mesa, California. The entire main card of LFA 81 will be available worldwide on UFC FIGHT PASS® at 10 p.m. ET / 7 p.m. PT.

“I am excited to announce that LFA is returning to my native southern California at LFA 81,” stated Soares. “Jamall Emmers and Rafael Barbosa are two of the most accomplished fighters in LFA. They are both 2-0 for the promotion and they both impressed UFC President Dana White on his reality television show ‘Dana White: Lookin’ for a Fight’. This is the perfect way to kick off Super Bowl weekend on January 31st.”

Tickets for LFA 81 – Emmers vs. Barbosa are available for purchase through LFAtix.com.

Emmers (16-4) is one of the only people to have fought for LFA, RFA, and Legacy FC. “Pretty Boy” became the third fighter to complete this rare hat trick of promotional appearances when he co-headlined LFA 5 shortly after the merger of RFA and Legacy FC in 2017. That night, Emmers lived up to the hype surrounding him after the praise he received from UFC President Dana White on Episode 7 of the inaugural season of ‘Dana White: Lookin’ for a Fight’. Emmers traveled to the high-altitude of Colorado and defeated the highly-touted Cory Sandhagen, who is currently a top-ranked fighter in the UFC. Emmers followed up that breakthrough performance with a scorching KO of Guilherme Faria in the co-main event of LFA 36. He landed a big right hand early in Round 3 to secure the win in front of his home crowd. Now the powerful 30-year-old hopes to shine once again and perhaps punch his own ticket to the UFC with another big win in the main event of LFA 81.

Barbosa (12-2) is one of the most exciting prospects to come out of Brazil in 2019. The man known as “Coxinha” has trained extensively with former UFC champion Lyoto Machida and RFA great Chinzô Machida and deploys a similar striking style. The Fábio Simões karate black belt won his LFA debut last March with UFC President Dana White sitting cageside. Barbosa’s win over Cameron Graves at LFA 63 was featured on the Season 4 premiere of ‘Dana White: Lookin’ for a Fight’. In fact, White had some encouraging words about Barbosa on the show before the fight took place, “Barbosa is 10-1…he’s 21-years-old though. This kid has so much more time to learn and grow.” The talented karateka doubled-down in the main event of LFA 68. He scored a beautiful standing elbow KO of former LFA title challenger Nate Jennerman. Now at the age of 22, Barbosa looks to make good on White’s inspiring words by continuing that growth by winning the main event of LFA 81.

In 2017, RFA and Legacy FC merged to form LFA, the premier developmental organization in Mixed Martial Arts. The combined forces of LFA launched the careers of over 170 athletes that have reached the pinnacle of MMA by competing in the UFC. In 2018, the promotion joined the London Trust Media Holdings group of companies. In 2019, the promotion announced a broadcast partnership with UFC FIGHT PASS®.

LFA 81 will be the ninth LFA event to take place in the state of California. RFA hosted eight events inside “The Golden State” before the merger. Further information will be announced soon. The entire main card of LFA 81 will be available worldwide on UFC FIGHT PASS® at 10 p.m. ET / 7 p.m. PT.

About OC Fair & Event Center:
The OC Fair & Event Center is the home of the annual OC Fair, which welcomes more than 1.3 million visitors each summer. The venue is also home to more than 150 year-round events including the OC Market Place every weekend, as well as Imaginology, a free STEAM-related event; Centennial Farm, a three-acre working farm; Heroes Hall, a veterans museum and education center; and Table of Dignity, an agricultural workers memorial. Visit OCFair.com for more information.