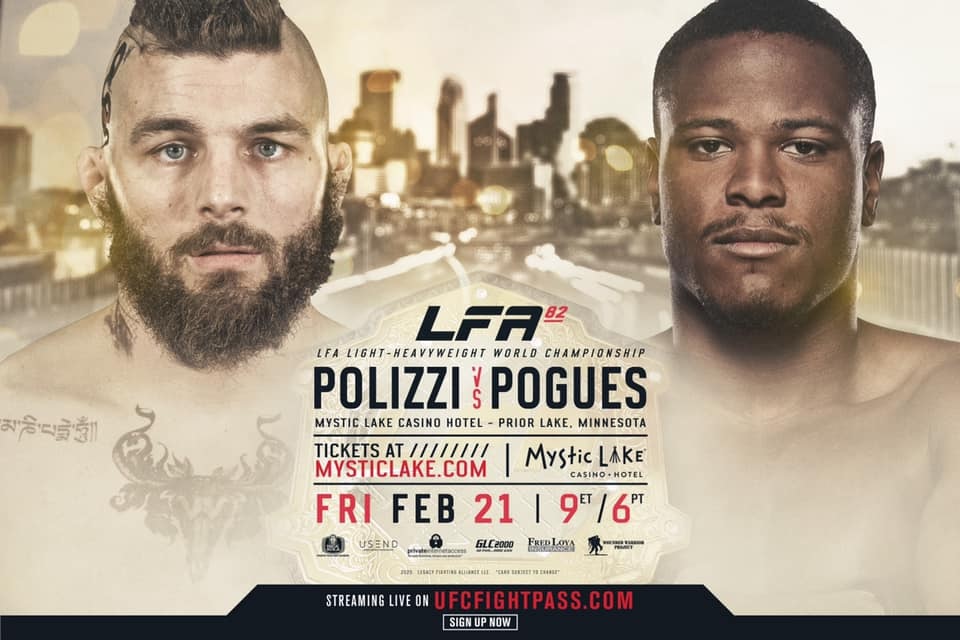 TICKETS on sale NOW through MysticLake.com

LAS VEGAS, Nevada – LFA CEO Ed Soares announced today that the promotion will crown a new light-heavyweight champion in Minnesota. LFA 82 will showcase two of Mixed Martial Arts’ most impressive 205-pound prospects battling for the vacant championship when the promotion returns to the “Land of 10,000 Lakes” in February.

“I am excited to announce that we are bringing the LFA light-heavyweight championship to Minnesota at LFA 82,” stated Soares. “Alex Polizzi and Jamal Pogues are two of the top 205-pound prospects in the world and they are both coming off dominant wins last summer. Polizzi won his LFA debut via TKO and Pogues impressed UFC President Dana White on Dana White’s Contender Series. This will be the first LFA title fight of 2020 and it will continue our tradition of producing great light-heavyweight champions.”

Tickets for LFA 82 – Polizzi vs. Pogues are available for purchase through MysticLake.com.

Polizzi (5-0) was a three-time NCAA Division I national qualifier in wrestling at Northwestern University before establishing himself as one of the top prospects in the sport last year. In 2019, the 28-year-old Big Ten wrestling standout won all three of his MMA bouts via KO or TKO. Those three wins brought his career record to 5-0 with 5 finishes. Like his nickname suggests, “Eazy” Polizzi has made it look easy too, as he has dispatched all five of his opponents in less than two rounds. The most impressive win of his career came last June in his home state of Wisconsin at LFA 70, when he defeated fellow undefeated prospect Pierre Walters with his trademark ground-and-pound in the first round. Polizzi followed up that win with another TKO win over UFC and Legacy FC veteran Daniel Jolly. Now the former Northwestern Wildcat heads “northwest” to Minnesota looking for his first major MMA title in his first fight of 2020.

Pogues (7-2) is one of the most exciting prospects to come off Dana White’s Contender Series last summer. The Joe “Daddy” Stevenson protégé impressed UFC President Dana White with a dominant performance against top Brazilian prospect Marcos Brigagão. The Brazilian came in to the bout with a perfect 11-0 record and much fanfare, but it was Pogues who left with the win and praise from the UFC President. “This kid looked good. He’s 7-2… He is with a great team and when you look at this guy, he has all the tools. He has everything it takes to be good and make it to the UFC,” stated White. “He needs more time… This kid in a short amount of time is going to be a very good fighter. He needs to stay on the track that he’s on. He’s with a great team. Joe “Daddy” Stevenson knows what it takes to get in to the UFC. I like this kid a lot.” Now the 24-year-old Californian looks to looks to prove White right by winning LFA gold at LFA 82.

LFA 82 will be the thirteenth LFA event to take place in the state of Minnesota. RFA and Legacy FC hosted a combined nine events in the “Land of 10,000 Lakes” before the merger. Six of those events took place under the RFA banner inside the Mystic Lake Casino Hotel. The entire main card of LFA 82 will be available worldwide on UFC FIGHT PASS® at 9 p.m. ET / 6 p.m. PT.