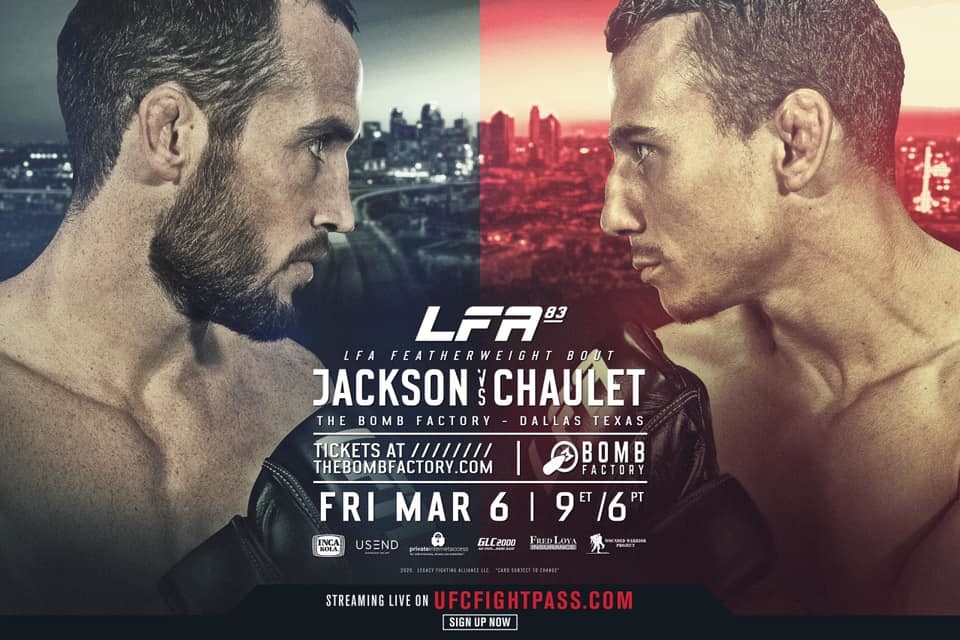 PLUS THE BANTAMWEIGHT DEBUT OF

TICKETS on sale NOW through TheBombFactory.com

LAS VEGAS, Nevada – LFA CEO Ed Soares announced today that the promotion is bringing a pair of pivotal bouts to Texas in March. LFA 83 will feature high-stakes confrontations in both the featherweight and welterweight divisions, when the promotion returns to Dallas with a stacked fight card loaded with popular veterans and promising prospects.

“I am excited to bring another stacked fight card to Dallas, the birthplace of LFA,” stated Soares. “Damon Jackson is our former featherweight champion and he will be looking to gain a record-setting seventh LFA win in front of his home crowd, while Mauro Chaulet is looking to build off the momentum of his debut win for us in September by winning the biggest fight of career. This is an exciting main event with a lot on the line for both men when we return to The Bomb Factory on March 6th.”

Tickets for LFA 83 – Jackson vs. Chaulet are available for purchase through TheBombFactory.com.

Jackson (16-3-1) returns to the LFA Octagon looking to reassert his dominance in the division he used to rule over as featherweight champion. The former 145-pound kingpin of both LFA and Legacy FC vacated his LFA title last year to participate in a $1 million tournament on ESPN. While he did not capture that 7-figure payday, the 31-year-old did leave his hometown fans in Dallas longing to see “The Leech” drain the division once more with his signature suffocating grappling style. The NAIA All-American wrestler is currently tied with three other fighters for the most wins in LFA history (6 wins) and will look to stand alone atop that wins list with one more victory. That opportunity will come in the main event of LFA 83.

Chaulet (14-6) will also be looking to make a triumphant return to the LFA Octagon after making an impressive debut in the co-main event of LFA 75 in September. The dynamic Brazilian showcased his well-rounded skillset en route to upsetting the highly-touted Laotian prospect Samson Phommabout in the penultimate bout of the evening in suburban Salt Lake City. The win came one week before his 31st birthday and put Chaulet in line for a marquee billing in his next appearance. That main event opportunity will come on the first Friday of March, when he travels to Dallas, the home of a former LFA champion, who eagerly accepted the challenge. The showdown will commence in the main event of LFA 83.

In the co-main event of LFA 83, battle-tested veteran Patterson (11-5) will lock horns with top undefeated prospect Dixon (8-0) in the latest iteration of The Red River Showdown between Texas and Oklahoma. Patterson is one the most successful welterweights in the state of Texas, while Dixon has established himself as the top welterweight prospect in the state of Oklahoma. “The Tactician” has spent half his career fighting for Bellator before signing with LFA in late 2018, where he earned a notable win over top prospect Ramiz Brahimaj. Meanwhile, Dixon has decimated the competition in the Sooner State. “Magic” compiled a perfect amateur record before winning all eight of his fights as a professional.

The feature fight of LFA 83 will see one of the top women’s prospects in MMA make her bantamweight debut. The wildly popular “All Hail” Hailey Cowan (4-1) returns after steamrolling her last four opponents inside the LFA Octagon. Cowan signed with LFA in 2018 to much fanfare. She was a two-time National Collegiate Acrobatics & Tumbling Association (NCATA) All-American at Baylor University. As many MMA pundits suspected, Cowan’s superior athletic ability began to manifest itself into fearsome fighting potential in late 2018.

After steamrolling two opponents in a span of six weeks, which included a viral head kick KO at LFA 55, Cowan returned last March at LFA 63. That night, she finished U.S. Army veteran Sarah Click via Rear Naked Choke with UFC President Dana White sitting cageside. Cowan then defeated a third consecutive Bellator veteran by earning a dominant Unanimous Decision over five-time Bellator veteran Jessica Middleton at LFA 74. Now the Waco native heads back to Big D looking to show that bigger is better as she moves up a division to make her bantamweight debut at LFA 83.

LFA 83 will be the tenth LFA event to take place in the City of Dallas. It will also be the nineteenth time that LFA has traveled to “The Lone Star State” of Texas. The entire main card of LFA 83 will be available worldwide on UFC FIGHT PASS® at 9 p.m. ET / 6 p.m. PT.

About THE BOMB FACTORY:
The Bomb Factory is a historic venue that accommodates up to 4,300 fans, consists of a mezzanine, VIP suites, and premium reserved seating options. The Bomb Factory is a state-of-the-art, 50,000 square foot venue located in the heart of Dallas’ world-famous Deep Ellum neighborhood, which is known for its rich culture of arts and entertainment. For more information visit TheBombFactory.com.