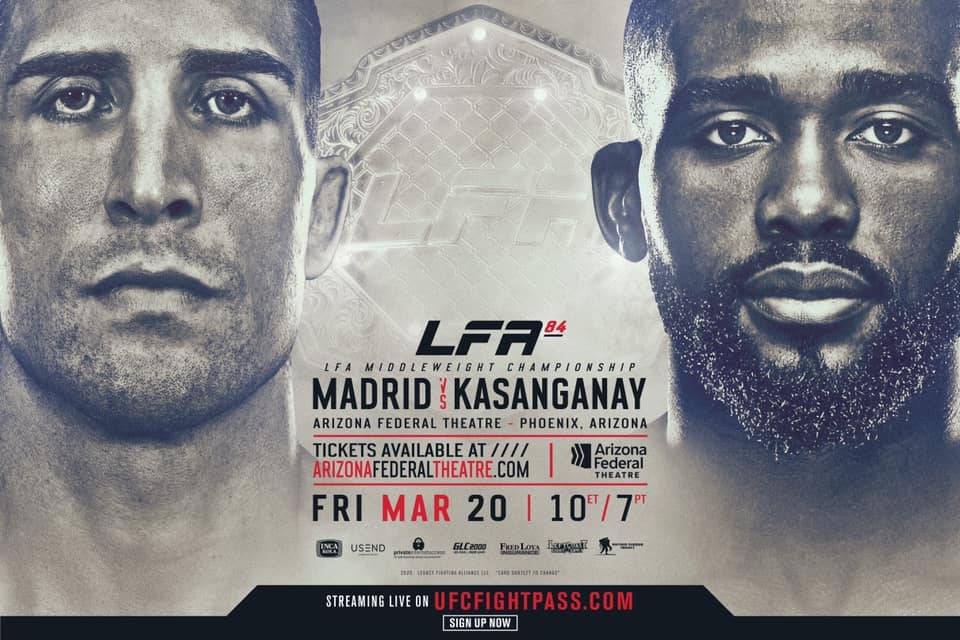 TICKETS on sale NOW through ArizonaFederalTheatre.com

“I am excited to bring the LFA middleweight championship to Arizona,” stated Soares. “Daniel Madrid was perfect in LFA last year and will look to win LFA gold in front of his home crowd. He will face Impa Kasanganay, who is looking to keep his undefeated record intact en route to winning an LFA championship. This is an exciting title fight with a lot on the line when we return to downtown Phoenix on March 20th.”

Tickets for LFA 84 – Madrid vs. Kasanganay are available for purchase through ArizonaFederalTheatre.com.

Madrid (17-6) returns to the LFA Octagon riding the momentum of four consecutive wins via submission. The BJJ black belt started the streak with a pair of wins at 205-pounds. The first was a rare Omoplata submission victory against Daviante Jones. “DemiGod” then submitted Armando Murillo Jr. with a Guillotine Choke to earn a regional light-heavyweight championship. The last two wins came at his natural 185-pound weight class inside the LFA Octagon and both came last year with lightning quick efficiency. Madrid needed less than a round to submit eleven-time UFC veteran and two-time The Ultimate Fighter alumnus Seth Baczynski in the co-main event of LFA 59. He then need just 51-seconds to submit top middleweight prospect Chris Harris in the co-main event of LFA 72. Now the talented Arizonan is looking to join LFA royalty by capturing the LFA championship in front of his home crowd in the main event of LFA 84.

Kasanganay (6-0) will also be looking to make a triumphant return to the LFA Octagon after gaining worldwide attention last summer. The top undefeated prospect signed with LFA late last spring and made his debut at LFA 71 in Atlanta, Georgia. That night he defeated Legacy FC veteran Devorious Tubbs. The win earned the Congolese prospect an invitation to compete on Dana White’s Contender Series. Kasanganay would face fellow LFA standout Kailan Hill. “Tshilobo” was unfazed by the hype surrounding Hill and won the bout unanimously, while earning the praise of UFC President Dana White. “I’m telling you right now, whatever organization out there, sign this kid. This kid is the future,” stated White. “I believe that this kid is going to be Top 5 and possibly a world champ some day. He just needs more experience.” Kasanganay will get that experience when he returns to the LFA Octagon looking for LFA gold at LFA 84.

LFA 84 will be the eighth LFA event to take place in the state of Arizona. All eight of these events have taken place at Arizona Federal Theatre (formerly known as Comerica Theatre) in the Grand Canyon State’s capital city of Phoenix. The entire main card of LFA 84 will be available worldwide on UFC FIGHT PASS® at 10 p.m. ET / 7 p.m. PT.

About ARIZONA FEDERAL THEATRE:
Arizona Federal Theatre is a 5,000 seat entertainment venue located in the heart of downtown Phoenix. The unique design of Arizona Federal Theatre has changed the way people think about live entertainment, as it marries the classic theatre style with the pulsating excitement of modern arena technologies. The theatre’s state-of-the art music & sound systems are perfect for concerts, comedy performances as well as theatre and family friendly shows. For more information, please visit ArizonaFederalTheatre.com.