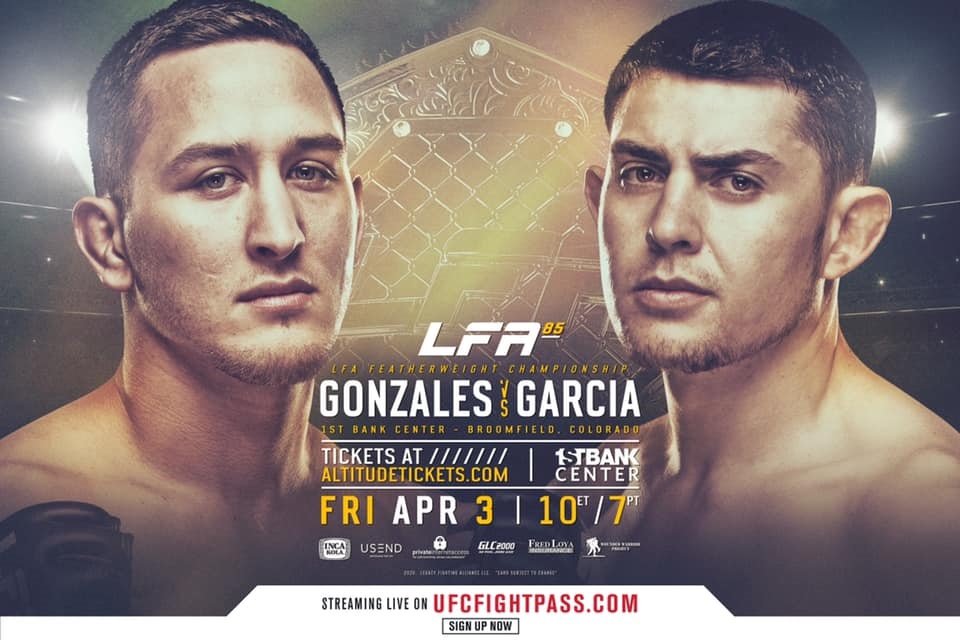 TICKETS will go on sale Wednesday February 21st
at 10:00 am MST through Altitudetickets.com

“I am excited to bring the LFA featherweight championship to Colorado,” stated Soares. “Justin Gonzales and Steve Garcia are widely considered the top two featherweight prospects in MMA. Gonzales has been fighting for nearly 8 years and has never lost a fight, while Garcia made a huge statement in the first LFA headliner of 2020. Both men have also won in front of Dana White on the Contender Series. This will be one of the biggest title fights of 2020 and it’s coming to the Rockies on April 3rd.”

Tickets for LFA 85 – Gonzales vs. Garcia TICKETS will go on sale Wednesday February 21st at 10:00 am MST through Altitudetickets.com.

Gonzales (10-0) will be making his long-awaited LFA debut in front of his avid fanbase in Colorado. The 28-year-old Coloradan began competing as an amateur in his home state in 2012 and has paved a path of destruction in the Rockies that has been admired far and wide. In 19 combined bouts, which include 10 as a professional, the man known as “J-Train” has been an unstoppable freight train en route to compiling a staggering 19 consecutive wins. Gonzales’ most recent victory came last summer on Dana White’s Contender Series, where he earned praise from the UFC boss after a securing a dominant unanimous decision win over Zach Zane. “This kid is undefeated and realistically if you look at his amateurs, which I never do, but his is so impressive… I did. He is 19-0. After tonight, he is 19-0. And even more impressive, his opponent’s records are 52-15. You never see that. You never see a guy that has faced that caliber.” Now Gonzales will look to go 11-0 as a pro and 20-0 overall with a win in his LFA debut. If successful, that 20th win will also earn him LFA gold.

Garcia (11-3) is one of the hottest prospects in the sport right now after making a stellar LFA debut in January. The 27-year-old is coming off a TKO win over LFA standout Chepe Mariscal at LFA 80. That win came on the heels of a TKO win over Desmond Torres on Dana White’s Contender Series. That result could have earned him a UFC contract if it were not for a weight-cutting mishap. Garcia came in heavy for the bantamweight contest, but did enough to impress the UFC President to the point where White gave him advise in his post-fight comments. After stating that, “The kid looked really good tonight. You can’t look better than he looked tonight”, White added that Garcia should move up a weight class. “What I would like to see this kid do is move up a weight class to 45. He’s getting older, it’s going to be harder to make that weight, and he’s huge. He’s huge at that weight. Get a couple of fights and see how does at 45 and we’ll take a look at him again.” Garcia heeded the advice of the UFC boss and will look to win LFA gold in his second fight at featherweight.

LFA 85 will be the eighth time that LFA has traveled to the state of Colorado. RFA visited “The Centennial State” eight times before the merger. The entire main card of LFA 85 will be televised live and nationwide on UFC FIGHT PASS® at 10 p.m. ET / 7 p.m. PT.

About 1STBANK CENTER:
1STBANK Center opened on March 5, 2010 with a performance by Furthur, featuring Phil Lesh and Bob Weir of the legendary group, the Grateful Dead. Formerly known as the Broomfield Event Center, 1STBANK Center is the premiere mid-sized event venue in the Denver area. The venue can hold up to 6,500 people and can accommodate live music, family shows, sporting events, community functions and more. 1STBANK Center is operated by Peak Entertainment, a partnership formed by AEG Live Rocky Mountains and Kroenke Sports & Entertainment, two of Colorado’s premier entertainment corporations. For more information, please visit 1STBANKCenter.com.