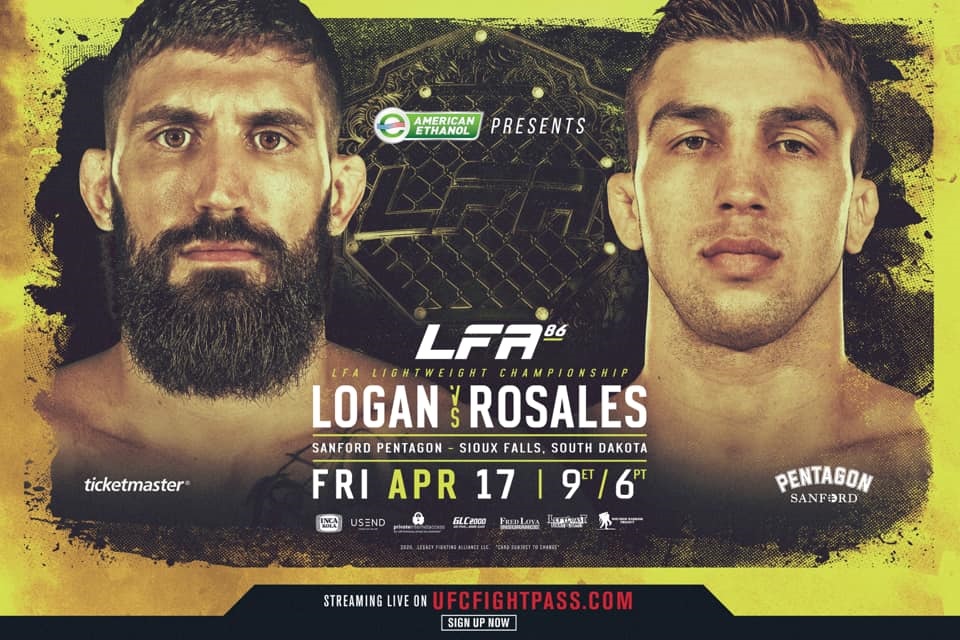 LFA brings the Lightweight Championship to South Dakota at LFA 86

TICKETS on sale NOW through Ticketmaster.com

“I am excited to bring the LFA lightweight championship back to South Dakota,” stated Soares. “Bryce Logan and Jacob Rosales are two of our most popular fighters as they both got their start in RFA before the merger. They will face each other for the vacant LFA lightweight title on Friday, April 17th. This will add another chapter to the state’s MMA history, which began with its first sanctioned event at RFA 17.”

Tickets for LFA 86 – Logan vs. Rosales are available for purchase through Ticketmaster.com.

Logan (11-4) will look to win his first world championship in his home state of South Dakota nearly 6 years after making his debut for the promotion. Logan made his promotional debut on the undercard of RFA 17 in 2014, which was the first sanctioned MMA event in the state of South Dakota. The Doland native and Dakota State University graduate would go on to compile an impressive 5-1 record for the promotion with three of the wins coming in LFA after the merger. That includes back-to-back victories over Kenneth Glenn and Jonas Flok at LFA 64 and LFA 77 to close out 2019 in dominant fashion. The 30-year-old, who currently trains alongside UFC bantamweight champion Henry Cejudo at Fight Ready MMA in Arizona, now looks to pick up a gold strap of his own with a successful homecoming at LFA 86.

Rosales (12-5), like Logan, got his start in RFA. Logan made his promotional debut in his second-overall fight, while Rosales made his in his third fight on the undercard of RFA 33 in 2015. That fight with Tommy Aaron was nominated for the RFA: 2015 Fans’ Choice Awards “Fight of the Year” and quickly made Rosales one of the most popular fighters in the promotion. Rosales would find success fighting for Bellator before returning to LFA in 2018, where he picked up a highlight reel knockout of Ricardo Seixas at LFA 54. More recently, the 24-year-old has found success in and out of the cage. In December, he was promoted to black belt in BJJ by Rigan Machado, Erik Paulson, and Ben Jones. The following month, he earned a dominant win over Salaiman Ahmadyar at LFA 81. Now the “Lil’ Badger” is on the hunt for LFA gold at LFA 86.